Home » Teaching » Assignments, Lessons, and Exercises » Bodies and Body Language: How Poetry Can Teach Us to Communicate

Bodies and Body Language: How Poetry Can Teach Us to Communicate

Bodies, a personal yet strangely distant subject matter for most students to discuss, provide a ripe lens through which to hone the skills that composition classrooms aim to foster. As mediums of communication, bodies afford us multiple ways to express ourselves: through gestures, facial expressions, vocal tone, and body language at large. As a subject matter, discussions of bodies foster important critical thinking strategies. After all, we all have bodies, and our own lived experiences within our bodies help us formulate concrete ideas about theoretical concepts. This essential concept of embodiment–giving concrete form to an idea–correlates directly with the critical thinking goals of my composition classroom, helping students to formulate sound arguments in support of complex, abstract ideas. In my Fall 2016 English 1102 course, “Odd Victorian Bodies,” students analyzed communication through bodies. They also considered complex notions like the social construction of physical human bodies, an especially fascinating notion to the science-heavy student body at Georgia Tech. In a society where bodies are often airbrushed to perfection, students learned that it is in fact their seeming flaws, or “oddities,” that make them natural and whole.

Through the Poetry@Tech Pedagogy grant, students integrated the study of bodies directly into their understanding of communication. Students in the “Odd Victorian Bodies” class attended Poetry@Tech readings, a new experience for most of them; all students had read poetry previously, but only a handful had ever attended an actual reading. After the readings, students submitted written responses in which they critically analyzed the impact of performance and body language (or, the oral, visual, and nonverbal in WOVEN) on their experiences as readers and consumers of poetry. By integrating their developing interests in bodies and body language into an analysis of the creative expression of poetry, students were able to critically analyze the ways in which body language and performance impacted how each poet communicated.

Students overwhelmingly reported positive reactions to the Poetry@Tech readings—many students thanked me for requiring them to go, and one student called the McEver Poetry Reading “one of the greatest nights I have experienced” at Tech. Attending these readings helped students develop strong understandings of how orality and body language impact audience and reader experiences of poetry, often in an exciting and immersive way.

Course outcomes in English 1102 range from creating sound rhetorical arguments to enhancing critical reading and thinking skills, while topical learning outcomes help students work toward these goals. My primary topical goal for “Odd Victorian Bodies” was for students to deconstruct the meaning of the word “odd,” and thus to inherently reconstruct their own understandings of normalcy. Most students entered the class expecting “odd” bodies to refer to those which are abnormal to the point of being grotesque, but as we discussed the social construction of body image, many students came to believe that the only “odd” bodies are the idealistically airbrushed ones depicted in much contemporary American media. Students also discovered the varying social responses to different types of bodies; studying Ellen Wood’s East Lynne, for instance, students were struck by the drastic change in the ways in which characters react to the former beauty, Lady Isabel, after she is maimed in a train crash. Although not surprised to see a character judged based on appearance, students made critical arguments about reactions to bodies within the readings, which also encouraged them to step back from their own embodied experiences to recognize similar patterns in their own lives. When students attended Poetry@Tech readings, they were able to transfer their critical engagement with course readings to their audience experiences, discovering how elements such as physical dress and appearance, vocal tone and inflection, and body language contribute to literature and its dissemination. Although the Poetry@Tech readings brought concepts of bodily oddity and multimodal communication into conversation with one another, I want to highlight ways the readings focalized communication outcomes and topical outcomes in turn.

By attending Poetry@Tech poetry readings, students experienced the ways in which communication shifts when transferring written communication into a more fully rounded multimodal experience. Students interpreted poems they read on the page differently after hearing the poets’ voices and watching their gestures and facial expressions. Further, by seeing multiple poets with various reading styles, students were able to make arguments about the effectiveness of various types of communication in different circumstances. Many students chose to write about poet Mark Doty, an animated reader whose poetry often finds humor in even the most serious moments. His performance–and many students noted that watching him felt more like viewing a performance than a reading–particularly grabbed their attention. Paige Ryan commented that Doty “commanded the full attention” of the room

from the moment he took the podium. His volume rose and fell as the moment demanded, and he spoke with his hands in a manner that highlighted the important aspects of his poem. In his poem “In Two Seconds,” he brought forth a piece of copy paper as if he had just scratched down the words moments before they were to be read, lending a sense of vulnerability to the reading that complemented the nature of the poem beautifully. . . . Doty’s ability to effortlessly vary his voice and body language lent a deeper layer of meaning to his poems and the points he hoped to make with them.

Another student, David Andrews, noted that Doty’s body language contributed to the pathos of his work, explaining, “The body is so integral to conveying the message of the poem. . . . The way [Doty] contorted his face, rolled his eyes, sped up and slowed down his pace, and moved his shoulders and hands invited me into [his] memories.” Being “invited in” was key to Andrews’s audience experience; in his response, he paraphrased the goal Poetry@Tech’s late director Thomas Lux introduced before the reading—poetry should make you feel something. For the students who attended Doty’s reading, his body language was particularly impactful; not a single student left that reading without feeling a variety of emotions. I saw tears streaming down many of their faces while Doty read “In Two Seconds,” a poem describing the death of 12-year-old Tamir Rice in an Ohio park after being shot by police officers who saw his toy gun as a threatening weapon. While many students wept, others later described feeling chills, and one noted the awkwardness he felt when his discomfort at the subject matter caused him to audibly laugh while those around him were silent. These experiences were drastically contrasted within moments, as students laughed—some to the point of cackling—over Doty’s reading of “Little George,” the story of a dog who “barks at whatever’s not the world as he prefers to know it.”

Having spent the semester studying embodiment and the ways in which we, as readers of the world around us, react to the ways that bodies communicate, students showed a keen ability to articulate the ways in which Doty’s body language and vocal intonation enhanced his message. They described his suddenly still posture as he began reading, his forceful eye contact with audience members during especially poignant moments of the reading, his bold emphasis of the words “assess the situation” when he explained that the “two seconds” to which his title refers is not the time it took for Tamir Rice to die, but for the officers to assess the situation and determine to shoot a child playing with a toy gun.

The major topical goal of my Fall 2016 “Odd Victorian Bodies” class was to improve students’ abilities to research, argue, and compose effective communication about a provocative and relevant sociocultural issue: perceptions of the human body. Students completed readings of Victorian literature that featured illness or disfigurement as a means of developing human characters into stronger, more resilient members of society. Students then connected these readings to poetry featured in Poetry@Tech, such as Anya Silver’s work that deals with her own experiences with breast cancer and personal loss. One student’s response indicates the achievement of this learning outcome; it also demonstrates how questions of embodiment connect with writing and communication goals. By reading Silver’s visual choices and body language as a sign of strength, Hadden Kelley shows the power of both Silver’s nonstandard choices and her visual and nonverbal communication. According to Kelley, Silver

explained to [the audience] what red means to her. It is her strength and her secret weapon. Red is a very bold color; it represents courage, passion, strength. When someone wears red it shows that they are there to be heard. The person in [“Just Red”] purchases the purest red lipstick she can find, using it to “limn [her] lips back out of [her] wan face.” She uses it to bring beauty and life out of her suffering body–a small act of rebellion against the seemingly never ending struggles of life. . . . Bathed in red, garbed in a beautiful and brilliant red dress, flashing a set of ruby red heels, smacking her cherry lipstick, Anya Silver’s whole body resonated with strength. She commanded the audience with her presence, silently declaring, “I will be heard. I will not give up.” . . . The color red was her armor against the daily struggles of life. When she left the stage, I found myself wondering if the local Walgreens carried the same shade of lipstick for myself–just red. 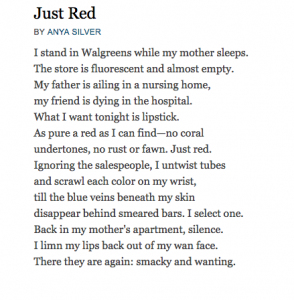 In Kelley’s discussion of Silver’s reading, we can see how centrally Poetry@Tech readings function in a composition class emphasizing the study of bodies. Students spent the semester developing and honing their critical analysis skills, studying the role of bodies in literature, and examining how the world around them shapes their interpretation of bodies. Thus, by the time they attended Poetry@Tech readings, students understood how to draw larger connections where they may not have seen them previously, and they were thus acutely and articulately aware of the important role bodies played in the poetry readings themselves. Even when poets weren’t addressing bodies directly, which is what many students expected going into the readings, their embodied performance elicited an analysis of oral, visual, and nonverbal communication, demonstrating strenghts students had developed by critically reading and discussing literature. Ultimately, students became better critical readers and critical thinkers by marrying their understandings of bodies in literature and in poetic performance.