My English 1102 “Modernism: Technology and Communication” course last spring asked how people around the world communicated before the internet. Starting with the advent of the telegraph, we addressed written, oral, visual, electronic, and nonverbal forms of communication through the nineteen thirties. We began the course with Tom Standage’s The Victorian Internet (1998) and then considered the ways that World War One changed relationships in Rebecca West’s Return of the Soldier (1918). When we read Nella Larsen’s Passing (1929), nonverbal communication provided a vocabulary for examining the ways that the characters responded to passing and social conventions. Evelyn Waugh’s A Handful of Dust (1934) presented a rich case study, with telephones, telegrams, and forms of transportation enabling infidelity and fatality.

Mulk Raj Anand’s Untouchable (1935) presented a unique challenge.[1] The protagonist’s ability to communicate is limited—being untouchable means that one cannot be touched, or touch others. And yet, the novel also depicts the ways that the sweeper Bakha communicates and the world he navigates. Early in the novel, Bakha’s sister must retrieve water for her family, but as an untouchable she is unable to draw it from the well herself. One student found this to be a central moment of communication in which the members of different castes come together. At the well, readers also see exchanges among members of the same caste and learn more about the characters’ relationships with each other.

For their third project, the students designed an interactive e-book annotating two to three pages of a text that we read for an iPad, e-reader, tablet, phone, or computer. We used as examples the recent iPad applications (apps) of T. S. Eliot’s The Waste Land and Jack Kerouac’s On the Road. Along with their e-books, the students composed a 250-word rationale addressing their design choices, the arguments that their e-book makes, and the significance of their e-book’s written, oral, visual, electronic, and nonverbal components.

Many students chose to make e-book versions of Untouchable because, as one student put it, it is the novel we read that needs the most annotation. With the technology available, students were able to include images of landscapes, references, and people as well as harness different forms of internet and digital capabilities. One student created links to the foods in the novel so that a reader could order them online and have them delivered as he read. Another student made recordings of himself interpreting the passages that readers could listen to as they considered the text.

The students used a variety of programs to make skillful and engaging e-books, including Microsoft Word, Power Point, Prezi, and iBooks Author. iBooks Author was particularly successful because of its aesthetically pleasing templates. The students also enjoyed turning the pages of their fully functional e-books on the iPad.[2] iBooks Author combines multimedia, text, graphics, and has features like a glossary, which students found useful for the references in Anand’s novel. 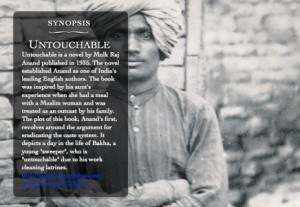 The sleek design of the first page of the student’s e-book in Figure 1, for instance, has a calming effect, inviting readers to turn the page and paradoxically engage with the less attractive reality of the novel’s latrine cleaner, which the student introduces in the last line of his summary. The semi-transparent box with curved edges, an Apple trademark, partly overshadows the image on the cover of our paperback copy of the novel. This image suggests the world that lies behind the technologically savvy overlay and of which one can catch digital glimpses within the e-book’s glossy packaging.

The project provided students with a means of engaging transnational modernism. Untouchable introduces the complex ethical issues at stake in the caste system, as Jessica Berman argues in Modernist Commitments: Ethics, Politics, and Transnational Modernism, and can allow students to gain broader, global understanding of modernism.[3] As we read and discussed the novel, particularly after several novels critiquing social relations in England and America, Untouchable presented a new geographical and social landscape. Berman resolves that “[t]he dilemma the novel seems to address, then, in both its content and its form, is how to place the ethical potential of the sweeper boy at the center of the story of untouchability and build from it new narratives of justice for India” (5). 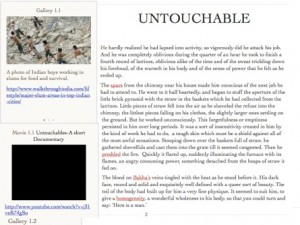 Creating e-books brought structure into relief, and the students grappled with not only what passages to annotate, but also how to depict Bakha’s role in society, his response to it, and our responses as readers. In the rationale that accompanied the e-book in figures one through three, the student explained that the passages he selected to annotate “show the transition of how Bakha is described as a hardworking man first, whom one should look upon and call a man as opposed to him being degraded to the status of an untouchable.” As we discussed the novel, several students from India shed light on the contemporary state of the caste system, particularly with regard to universities, where places are held for descendants of lower castes out of a desire to compensate for past injustices. As they annotated their e-books, students also provided information regarding the structure of the caste system and the contemporary role of untouchables in India. 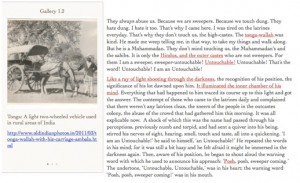 Annotation draws students’ attention to language, but in many ways, an e-book will never provide a substitute for a lengthy essay in which students participate in a larger critical conversation, analyzing the text and the issues it presents in depth. However, a project like an e-book lets students imagine the future of digital textuality and begin to distinguish among digital resources that are available. Introducing global texts to new audiences, the students are also contributing to new critical conversations and recent Postcolonial Digital Humanities initiatives.[4]

In my “Digital Woolf” class this fall, the students will be mapping Jacob’s Room (1922), and a similar challenge will be making sense out of Virginia Woolf’s novel without losing sight of the haze that lies over it.[5] In groups, students will use Google Maps to create an annotated, interactive map for guiding readers through one segment of the novel. These sections are indicated on the syllabus so that students can create drafts of their maps as we read the novel. In addition to the characters’ movements, the students’ maps can include captions with quotations from the novel, street views of the locations, historical information, and links to media. The students will then be researching the locations and contexts informing their segments of the novel further and demonstrating for the class how their maps work and the significance of their research during their group presentations. Revisiting each segment of Jacob’s Room as students give their presentations will enable the class to interpret the ways that language, history, and geography shape Woolf’s fragments and the whole that they form. Combining mapping tools, close reading, and research in this way, students can more thoroughly engage with aspects of “modernist narrative,” in which Berman argues “rhetorical activity exists in constant and perpetual relationship to the complex, various, and often vexing demands of the social practices, political discourses, and historical circumstances of modernity and the challenges they pose to systems of representation” (7-8).

What does students’ digital scholarship mean for the future of modernism? In the previous instance, it enables first-year students to read Woolf, following the example of other English 1102 classes on David Foster Wallace’s Infinite Jest and James Joyce’s Ulysses.[6] Male students also still outnumber female students at Georgia Tech, making Woolf an even tougher sell. Mapping Jacob’s Room will allow students to spend a significant amount of time with a male protagonist. Ultimately, teaching Woolf at Georgia Tech will draw out the significance of the writer as an engineer of language and engineers’ ability to create new art in response to it.

[2] One difficulty of iBooks Author is that it is meant to create books that will be published on iTunes and available to the general public. If you would like to keep students’ work private, the book files can be emailed and opened on iPad to read it as a fully functional e-book in iBooks. The e-book file needs to be small, however, for this to be possible.

Amanda Golden received her Ph.D. from the University of Washington and a Post-Doctoral Fellowship in Poetics from Emory University's Fox Center for Humanistic Inquiry. This fall she is teaching an English 1101, "Apple and Microsoft: 1975 to the Present," a multimodal communication course examining such topics and themes as hardware, software, engineering, aesthetics, narrative, innovation, competition, global marketing, web presence, and the workplace. Her research interests include twentieth century poetry, transnational modernism, literary archives, and the digital humanities. She is completing the book manuscript Annotating Modernism: The Reading and Teaching Strategies of Sylvia Plath, John Berryman, and Anne Sexton and is the Book Review Editor of Woolf Studies Annual. She has published or has forthcoming essays in Plath Profiles: An Interdisciplinary Journal of Sylvia Plath Studies, The Ted Hughes Society Journal, and Contradictory Woolf: Selected Papers from the Twenty-First Annual Conference on Virginia Woolf.
View all posts by Amanda Golden →
Tagged  Anand, annotation, digital humanities, iBooks Author, Jacob's Room, Untouchables, Woolf.
Bookmark the permalink.