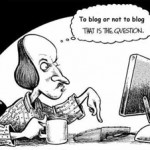 This term Tom Lolis and I are jointly teaching an 1102 course entitled “#DigitalBard: New Media Approaches to Shakespearean Drama.” By jointly I mean that we each teach three sections, but we are both focusing on the same plays (A Midsummer Night’s Dream, Macbeth, Richard III, and Titus Andronicus); while we bring our own research background and interests to class lectures, several major assignments are shared across all six sections. These assignments are all rooted in some form of digital media: blogs, wikis, suites that incorporate several tools and platforms (I’m thinking specifically of Google here). But media, as we are applying the term, also refers to performance and video. One of our goals is to break students of the tendency to shy away from Shakespeare because they believe the plays are hard to read and are therefore boring and a waste of their time. (If I could get them to stop referring to Elizabethan English as “Old English,” I would consider that a bonus).

The first module has focused on A Midsummer Night’s Dream. We were fortunate enough to be able to schedule our reading of the play to coincide with the Shakespeare Tavern’s production. We also arranged for members of the Shakespeare Tavern company to meet with each class in a workshop environment, providing students with some insight into how actors prepare for a Shakespearean role, as well as answering questions the students had about the ST production and acting in general. In combination with these activities, students were given several assignments designed to help them articulate their responses to what they read, viewed, and experienced. As part of our ongoing blog, students were asked to write two blog posts and comment on the posts of their course-mates: one post focused on the performance, and the second on the workshop. In addition, my students were assigned to write a Play Response Paper, examining their response to reading and viewing the play, as well as considering how they would identify WOVEN elements in the play-text and the performance.

Performance: It should not have come as a surprise to me that students almost universally preferred watching AMND to reading it. Throughout their posts, comments, and in their draft essays, commentary focused on how they didn’t get the comedic aspects of the play until they saw how the director and actors interpreted the humor and presented it to the audience. The Shakespeare Tavern’s mission of evoking Elizabethan-era performance conditions also helped students make sense of what I had been trying to explain to them – that an absence of set pieces and a reliance on few props enabled the performers to focus on characterization. The Tavern environment also helped students to rethink their connection to a play as members of the audience. Most modern performance spaces set the audience in a defined dark space; the Tavern tries to recreate an ambiance more in line with that of an inn-yard, or the pit at an amphitheatre – where the audience is treated as part of the performance. Because of this, I was able to watch my students as they watched the performance. At first they struggled to make sense of the language and characters (the ST employs role doubling and students had to get used to seeing the same actor perform several roles). But soon they were laughing – hesitantly at first, looking at one another as if to make sure that they weren’t alone in their laughter, but soon REALLY laughing, and pointing out funny bits to one another.

Workshop: The workshop proved equally revealing. Tom Lolis and I weren’t sure what the ST folks had in mind. The members of the company immediately had students out of their seats, participating in vocal and physical warm-up exercises that actors use to prepare for a performance, and taking part in scene analyses that had students discussing lines from three scenes and interpreting them through speech, gesture, and body language. While some students were clearly uncomfortable with the performance aspect of the workshop, many surprised me with the change in their demeanor. As the workshop leaders challenged them to vocalize and embrace characters, more and more of the students let go of their inhibitions and got into the spirit. One of my favorite moments was watching a shy student asked to embody a rock. At first he just crouched on the floor looking … rock-like. But soon he was a rock with attitude, reinforcing the entrance of Titania, the Fairy Queen, with a suggestive grin and an enthusiastic whoop!

Play Response Paper: The most challenging assignment for the students was writing the Play Response Paper. I designed this assignment to make students interpret their reactions to the play using WOVEN elements to identify individual aspects of the play-text and the performance. Students workshopped the drafts with peers before submitting them to me; now they are revising those drafts and incorporating feedback from their peers and me. In reading these drafts, I have realized how difficult it is for many students to “own” their observations. Their experience in high school English classes as well as Georgia Tech science and engineering courses has driven them to remove themselves from the picture. Many students had significant trouble using the first-person narrative mode, shifting from a passive to an active voice, and even more trouble articulating their responses to what they read and saw. It hadn’t occurred to me what a struggle this would be for them. It isn’t just that they don’t want to be challenged – going beyond “I found the play boring” – they don’t trust themselves to move beyond emotional responses. They don’t seem to have much experience articulating specific observations of something they see or hear. The challenge for me is to encourage them to be as detailed as possible in their descriptions of what happened on stage and in the workshop. It’s been an uphill struggle for me, but I seem to be making some headway.

What’s Ahead: We’ve finished the AMND module and have moved on to Macbeth. The goal for this play is to help students understand how the themes and plot lines of Shakespeare’s play have been adapted for use by various cultures and reinterpreted for a variety of settings. To that end we will be screening Maqbool and Men of Respect, and encouraging interested students to watch movies like Throne of Blood and Scotland, PA.  Then students will work on a Short Research Project creating a wiki knowledge base of Elizabethan and Jacobean people, culture, and society.  After that we’ll be reading Richard III. Tom and I are working on a text adventure version of the Richard story (think Zork) for students to play, and, if we are lucky, we’ll be able to get them to think about this history play in terms of the choices Richard makes to get and keep the throne. Last, we’ll be examining Titus Andronicus in terms of its social issues and assigning a group research project that encourages students to compare the issues in the play with current global and societal trends.

We’ll check in again as the semester goes on with more observations about the experience of collaborative teaching and our successes (and failures) examiningShakespeare studies in terms of social/media.

Diane Jakacki received her PhD from the University of Waterloo, where she specialized in early modern printed drama, and participated in federally-funded digital humanities research projects. She has published two articles on applying social semiotic methods to early modern theatre history, an edition of Wit and Science, and co-authored an essay on developing digital image annotation tools. She is a software consultant to imageMAT and the Records of Early English Drama. At Georgia Tech she applies digital humanities methods to pedagogical solutions. Jakacki is currently developing researching the Elizabethan clown Richard Tarlton and his touring relationship with the Queen’s Men troupe.
View all posts by Diane Jakacki →
Tagged  pedagogy, Shakespeare, social media.
Bookmark the permalink.