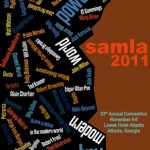 Brittain Fellows Doris Bremm (second-year), Lauren Curtright (second-year), and Sarah Eden Schiff (first-year) will present at the South Atlantic Modern Language Association conference in Atlanta this weekend, November 4-6. The theme for this year’s conference is “The Power of Poetry in the Modern World.” Former Brittain Fellow and Associate Director of Undergraduate Studies, Shannon Dobranski will also be presenting. For more information go to: http://samla.gsu.edu/

32. Verse, Voice, and Vision: The Use of Poetry in Cinema

Society for the Study of Southern Literature, Session I-B

14. Can Christianity Be Post Secular? Professions of Faith and Doubt in Contemporary American Literature

Sarah Eden Schiff, Georgia Institute of Technology – Amiri Baraka, the Nation of Islam, and the Story of American Origins.

Robin Wharton is Assistant Director of Writing and Communication. She holds a law degree (1999) and a PhD (2009), both from the University of Georgia. Her current project involves exploring the influence of common law poetics in Middle English writing. Since 2005, she has been a collaborator on the
Bookmark the permalink.