Home » Teaching » Assignments, Lessons, and Exercises » Myth BEYOND the Classroom

Myth BEYOND the Classroom 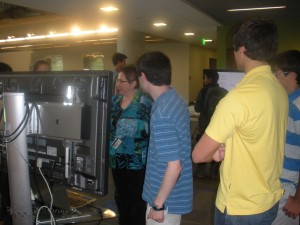 Two weeks ago, my students displayed their final projects in the third floor gallery space in Clough.  For the final installment of my “Myth in the Classroom” column, I thought I’d reflect back on what I learned, what I enjoyed, and what I struggled with in putting the exhibit together as we look ahead to next year.

I’ll be frank: The first reason I considered having my students display their projects was because of peer pressure.  So many Brittain fellows held awe-inspiring showcases of their students’ work in the fall, and I felt like I should do the same for fear that, otherwise, I would be doing my students a disservice.

So I organized a meeting with Charlie Bennett at the beginning of the spring semester to figure out dates and hammer out some details.  One of the first things Charlie asked me was why I wanted to hold an exhibit of my students’ work.  (He wanted to know my goals so he could make them come to fruition.)  I had to think fast and blurted out some half-baked ideas that I soon came to realize were actually pretty valid and worth thinking about more: I wanted my students to recognize how having an audience beyond the teacher encourages them to communicate on multiple rhetorical levels; I wanted them to have the pride of seeing their work on public display; I wanted Georgia Tech as a community to appreciate the value of what we in the Writing and Communication program do.

In the end, I think the exhibit was semi-successful at achieving the second and third goals but most successful with the first.  For the final project, student-groups selected one of the dystopian texts we had looked at over the course of the semester and adapted it into another form or medium.  They turned novels into choose-your-own-adventure games, short stories into comic books, poems into websites, and songs into animated films.  I quickly learned that if you let Georgia Tech students loose, they will astound you with their imaginations and their ability to execute.  I also had them write a research paper in which they defined their methodology of adaptation and discussed how it influenced the dystopia they produced.  I explained to them that they should imagine their audience members (both readers and those who would attend the exhibit) as people who may not be familiar with the text they’ve chosen to adapt.

Because they couldn’t take my knowledge of the assignment, the text, and adaptation theory for granted, they had to be much more specific and self-reflective about what they produced and how.  For example, this website adapts Jon Davis’ darkly satirical poem “Preliminary Report from the Committee on Appropriate Postures of the Suffering,” which critiques the way that our social system makes little effort to help the poor—and benefits from their suffering.  In their paper, my students explained that they wanted their viewers to realize “the absurdity of the committee and its ideas,” but also to realize that that absurdity is “almost how they act in the real world.  We hope the subsequent cognitive dissonance will allow our readers a chance to rethink their outlook.  We chose the form, medium, and message we did to expand our audience, anyone on the web.  We want them to be lured in by their curiosity, and then ensnared by their conscience.”  The students who produced the most successful projects, like this one, were able to perceive their work from their audiences’ perspectives and therefore better understood and followed through on their purpose.

The reasons why I don’t think the exhibit was as successful at giving students’ pride and at promoting the Writing and Communication program are related: Despite the enticement of refreshments generously provided by the Writing and Communication program (AKA Rebecca and Robin), ultimately, not a lot of people attended.  This is not at all a hand-slap/guilt-trip moment.  End-of-the-semester schedules are busy and stressful; I myself made it to very few other student displays.   Charlie had the great idea to situate the exhibit in a much-trafficked area of Clough, but, despite my awkward attempts to cajole passersby into visiting (and grabbing a cookie), few of the exhibit’s attendees weren’t students from my other sections (whom I’d encouraged/bribed to attend through extra credit).  Shout-outs to Rebecca, Robin, Lisa Yaszek, Rachel Dean-Ruzicka, Katy Hanggi, Mike Tondre, Chris Weedman, Doris Bremm, Leann Hunter, and others I’m likely forgetting, as well as to several librarians, including Tearanny Street, for coming by.  My students most benefited, I think, from explaining to “grown-ups” who weren’t grading them what they had achieved.  And I wanted them to have more of those kinds of experiences, as well as the experience of discussing their projects with peers who weren’t already familiar with the assignment.

I was mentioning how proud I was of my students’ work and how I’d wished it had reached an even wider audience to Katy Hanggi, and she came up with a brilliant idea, which I’ve received permission to here propose: Perhaps, in the future, Writing and Communication faculty members who would like to arrange an exhibit of their students’ work can collaborate on an end-of-the-semester extravaganza, something along the lines of “Celebrating Teaching” but instead “Celebrating W&C Student Work.”  Those participating could cancel a week of class, write up a schedule, and invite students in other sections of ENGL 1101 and 1102 to visit other classes’ exhibits—and perhaps to write about what they see.  Not only would this free up students’ and instructors’ schedules so that there would be more time to attend multiple exhibits, but it would also draw more attention to all of the innovative and sophisticated work our students (usually) do.  Writing teachers of GA Tech unite!

If he’s up for it, Charlie would no doubt be a valuable asset in arranging such an event.  He made the logistics of the exhibit manageable and was able to think beyond my initial vision.  It was his idea to incorporate a display of some of the materials in the sci-fi archives, which my students had worked with earlier in the semester.  He made the arrangements with the archive librarians to put it together, and he was the one who had to yell at someone when some of the equipment was late to arrive.  I’m always grateful when I don’t have to be the one to do the yelling.  With his skills and connections, I bet we could collectively put together quite a show.

Sarah Eden Schiff is a Marion L. Brittain Postdoctoral Fellow at the Georgia Institute of Technology. She received her PhD in American literature from Emory University in May 2010 and taught courses in American literature and composition at Agnes Scott College in the 2010-2011 school year as a Visiting Assistant Professor. Schiff is currently working on a book project that considers the way myth—a reputedly conservative narrative form—is put to use in radical ways by minority US writers in the 1960s-1980s. She has published on such authors as Philip Roth, Octavia Butler, and N. Scott Momaday and enjoys incorporating her interdisciplinary studies in religion, anthropology, and history into the literature and writing classrooms.
View all posts by Sarah Schiff →
Bookmark the permalink.