Myth in the Classroom, take two 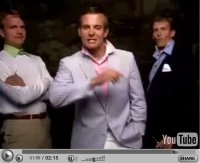 I know you’ve been holding your breath for the second installment of my musings on and eternal search for effective stereotype-breaking strategies.  So here goes.  Today I take on the elusive term “race” as a myth that students approach rather curiously: with great resentment.  And I think I’ve figured out at least part of the reason why.  Let me try to explain:

I attempted to have a conversation with my students this week about white privilege.  They read “The End of White America?” by Hua Hsu, published in The Atlantic in 2009.

I also had them look at this hilarious video made by Smirnoff in 2006, which Hsu mentions.

So, they had read (or were supposed to have read) Hsu’s essay on the “beiging” of the white race in the United States, the increasing diversity of American popular culture, and the ensuing backlash against multiculturalism and retrenchment into whiteness.  And they had watched Smirnoff’s amusing and astute diagnosis of this trend exemplified by the voguish co-optation of black culture.

When I asked the students what the ad was responding to or commenting on, these were some of the responses I got (mostly from white students but also from a few African American students):

Rather than addressing Hsu’s serious concerns about how Americans can define their national culture without losing sight of its history of white supremacy, these were the kinds of bizarre, insensitive, and what I can’t help but interpret as petty reactions.  I’m still trying to figure out how we got onto the subject of demographic data, but it was a heated part of the discussion.  I found myself in the rather uncomfortable position of explaining the logic behind the collection of this kind of data on standardized tests and in job applications.  It didn’t go over well.

Despite having spent more than half a semester on the social, psychological, economic, and legal repercussions of an American history replete with racial discrimination, my students don’t want to let go of the dearly-held belief that merit will out—even though we began the semester with Malcolm Gladwell’s Outliers (which illustrates how so much of success is based on luck, timing, and location).

The burden of being born into a society still wrestling with the hangovers of slavery, segregation, colonialism, and exclusion is too great.  The students are idealists.  They’ve worked hard and don’t want to be denied rewards they feel they deserve or be rewarded for something they don’t.  I don’t blame them for that.  It’s hard to tell them that they are the unlucky inheritors of centuries of inhumane human behavior.  They’d rather think that that part of our history is past.  But we all know Gavin Stevens’ famous line from Faulkner’s not-so-famous Requiem for a Nun: “The past is never dead.  It’s not even past.”

I’m still trying to develop my students’ historical imagination (which I discussed in my first post).  And I don’t think I’m succeeding.  How can I make them realize that they can’t understand the problems of now if they don’t recognize how those problems are inextricably linked with the problems of then?  And how do I do that without making my white students feel either guilty or resentful and my minority students feel alienated, victimized, or like they’re a problem that needs to be fixed?

I’m tempted to bring in Peggy McIntosh’s classic essay, “Unpacking the Invisible Knapsack” (which we discussed in the second installment of our digital divide discussion in D-Ped) and have the students perform a privilege exercise in which students take steps forward or back based on what kinds of privilege they have or have not experienced.  Here’s an example of one put together by the National Curriculum and Training Institute.

But given how resistant my students (or at least the vocal ones) were to even acknowledging race as a meaningful category, I’m reluctant to put them on the spot and force them to self-identify.  While I do believe that feeling uncomfortable in the classroom can be a rewarding pedagogical experience, I also know that sensitivities run high when it comes to race (even though it supposedly doesn’t matter anymore).  I’m thinking my next step may be to give students the exercise to look at and perhaps do in private.  They will be able to tally how many steps forward and back they might take were they to act it out.  Then, I would have them write down answers to such questions as, “How did this exercise make you feel?  Would you feel uncomfortable doing it in class?  Why or why not?”  Then, based on those (perhaps anonymous) responses, I might be willing to follow through with the exercise in the future.  Or not.

Sarah Eden Schiff is a Marion L. Brittain Postdoctoral Fellow at the Georgia Institute of Technology. She received her PhD in American literature from Emory University in May 2010 and taught courses in American literature and composition at Agnes Scott College in the 2010-2011 school year as a Visiting Assistant Professor. Schiff is currently working on a book project that considers the way myth—a reputedly conservative narrative form—is put to use in radical ways by minority US writers in the 1960s-1980s. She has published on such authors as Philip Roth, Octavia Butler, and N. Scott Momaday and enjoys incorporating her interdisciplinary studies in religion, anthropology, and history into the literature and writing classrooms.
View all posts by Sarah Schiff →
Tagged  historical imagination, pedagogy, stereotype, teaching race in the writing classroom.
Bookmark the permalink.