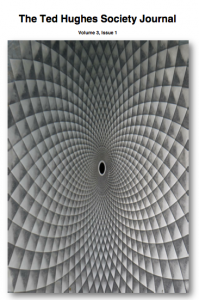 Amanda Golden published two pieces in the third volume of The Ted Hughes Society Journal. “Ted Hughes and the Midcentury American Academy” addresses Hughes’s teaching at the University of Massachusetts, Amherst in the spring of 1958. While many critics assume that Hughes did not annotate his books, Hughes underlined and added notes in several of the books in his personal library in preparation for teaching. This is the first essay to analyze Ted Hughes’s strategies as an annotator and their relationship to his pedagogical strategies. It includes images of the copy of Fyodor Dostoevsky’s Crime and Punishment that Sylvia Plath first annotated to teach in her freshman literature course at Smith College in 1958 and Hughes subsequently inscribed with his own markings and comments for his Great Books course at the University of Massachusetts. As Plath had already filled the margins with a thorough response to the novel’s characters and themes, Hughes added quick notes, often at the tops of pages, to view at a glance while teaching, which encapsulated central issues in the text. Plath and Hughes’s shared copy of Crime and Punishment, housed with Hughes’s personal library in Emory University’s Manuscript, Archives, and Rare Book Library, not only records both poets’ reading styles, but also presents an extensive record of their parallel approaches to literary criticism and pedagogy.

Jules Chametzky arrived at UMass, Amherst in the fall of 1958, following Hughes and Plath’s departure for Boston. In “Ted Hughes, Isaac Bashevis Singer, and an Interview with Jules Chametzky,” Chametzky contextualizes Hughes’s teaching at UMass, addressing the curriculum and the surrounding academic climate. Chametzky also recalls his later friendship with Hughes and his interest in Isaac Bashevis Singer’s fiction. Golden’s introduction to the interview provides an overview of Hughes’s reading of Singer and its relationship to Plath and Hughes’s responses to Jewish subject matter in their poetry and prose.