Pantagruel in his Infancy Gustave Doré, via Wikimedia Commons

In a previous post, I reflected on the successes and failures of a project I assigned in my Spring 2012 course on copia, and assigned again with some minor changes this semester. Students spend the first month of the semester gathering an eclectic mix of material, organizing it into categories, and publishing it in a commonplace book or blog. As they collect videos, memes, quotations, music, text messages and photos, we read early modern texts that demonstrate copia – abundance of expression – in some form. In 2012 I began the course with Shakespeare’s Twelfth Night, but I came to realize that “If music be the food of love, play on” just can’t illustrate for students the excess of copia half as well as, say, this

“For when Pantagruel’s mother Badebec was giving birth to him, there first sallied forth from her belly sixty-eight muletters, each leading by the halter a mule laden with salt; after which came nine dromedaries laden with smoked bacon and ox-tongues, seven camels with eels, and then five-and-twenty wagons with leeks, garlic, chibols and onions.”

“Listen now, you ass-pizzles. May ulcers give you gammy legs: and remember to drink a toast back to me! And I shall pledge you double quick.”

It’s an aggressively non-user friendly book, in the sense that it’s full of disconnected episodes, chapters that lead nowhere, lists that go on for pages, jokes that keep going long after the punch line, not to mention countless allusions to 16th century French politics that no GT freshman can be expected to recognize. Oh, and a drunk narrator. Reading Rabelais is a lot like watching this scene from Monty Python over and over again. It’s a giant book, a book so obsessively invested in celebrating abundance of expression that the celebration becomes suffocating, exasperating, even tedious—a good party going bad. A book that deliberately makes itself un-useful.

But for these very reasons, Gargantua & Pantagruel is, I think, worth reading in the digital age. On the same day students read a chapter in which Panurge demonstrates 11 complicated methods for revealing the invisible writing in a message sent to Pantagruel, only to concede that no message was sent after all, I also assigned Hasan Elahi’s “Giving the FBI what it wants.” In that article (and in a later TED talk), Elahi discusses a digital interface he created to “help” the FBI track his movements around the world, after he was mistakenly detained in a Detroit airport post 9/11. Elahi’s website includes not only flight numbers and hotel receipts, but photos of in-flight meals and silverware, of parking lots and hotel beds, “of the tacos I ate in Mexico City between July 5 and 7, and the toilets I used.” It’s a Rabelaisian prank, as Elahi admits:

“the interface I use is deliberately user-unfriendly. A lot of work is required to thread together the thousands of available points of information. By putting everything about me out there, I am simultaneously telling everything and nothing about my life. Despite the barrage of information about me that is publicly available, I live a surprisingly private and anonymous life.”

He goes on to point out that the project he began “back in 2003” is similar to what millions of people do now via social media. We tell each other everything and nothing. We provide a suffocating, exasperating, even tedious amount of information. Every time Facebook distracts me with a buzzfeed article about animal photobombers, I’m reminded of Pantagruel’s list of library books in Saint-Victor (titles include Fundamental Floggings; The Heated-up Leftovers of Bigots; On the Art of Discreetly Farting in Company), or the list of obscure punishments Epistemon brings back from the underworld (Agamemnon is “a licker out of casseroles;” King Arthur “clean[s] grease off headgear;” Cleopatra sells onions). After we read the chapter in which Panurge consults Virgil’s Aeneid (6 or 7 times) as part of his effort to decide whether or not to marry, one of my students made this quickmeme: 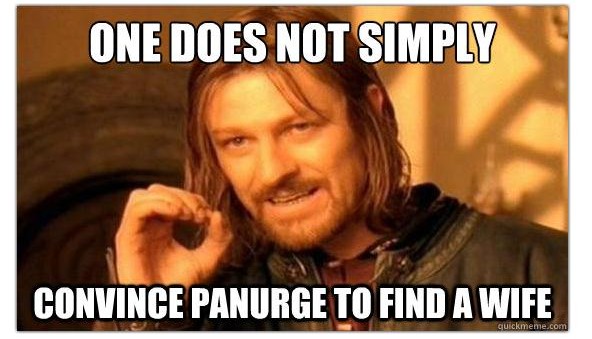 So I’m not alone in seeing connections between the kind of sharing that goes on in Rabelais and the kind of sharing that occurs online. In Gargantua & Pantagruel, no one does anything “simply,” as in “once and for all” (remember that “simple” comes from the Latin for “single”). The same is true for many users of social media. We do not communicate “simply” on sites like Facebook and especially Twitter (which I admit I still find too exasperating to use regularly). Navigating social media is little like reading Rabelais in that we are offered disconnected episodes that accumulate without adding up. There is an order to Facebook, of course, but it’s a curious order (not to mention a corporate order), like the order of lists, which “construct groupings, yet in so doing … provoke questions about those groupings.”1 When we consider their spatial logic, lists can even be seen as heterotopian, as counter-sites that resist or problematize traditional or expected conceptions of order. 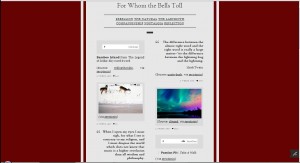 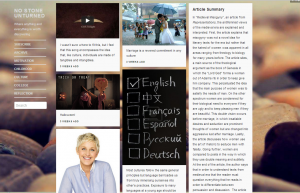 Making my way through a new set of commonplace blogs from a new set of students, I found myself much more attentive to the spatial logic of each site. I believe the best sites were those that were most heterotopian, the ones that provoked the most questions about order, the ones that drew attention to curious or problematic groupings – listing them, in a way, via templates that remove the gaps that normally exist between items and thus give us the space to decide how these items are related and how they are not. Lists deny us that space because they deny us the gaps, suggesting that many things can occupy the same space. 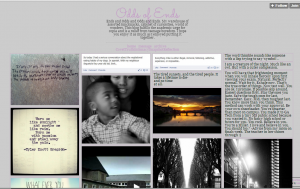 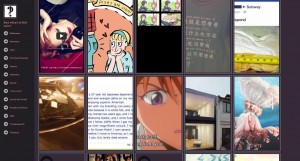 Consider the list that Foucault claims inspired his book, The Order of Things. He quotes from a Borges essay, “The Analytical Language of John Wilkins,” which refers to

“a certain Chinese encyclopedia entitled Celestial Emporium of Benevolent Knowledge. On those remote pages it is written that animals are divided into (a) those that belong to the Emperor, (b) embalmed ones, (c) those that are trained, (d) suckling pigs, (e) mermaids, (f) fabulous ones, (g) stray dogs, (h) those that are included in this classification, (i) those that tremble as if they were mad, (j) innumerable ones, (k) those drawn with a very fine camel’s hair brush, (l) others, (m) those that have just broken a flower vase, (n) those that resemble flies from a distance.”

Reading this passage from Borges, Foucault says he laughed, of course, but that this laughter “shattered … all the familiar landmarks of thought … breaking up all the ordered surfaces and all the planes with which we are accustomed to tame the wild profusion of existing things and continuing long afterwards to disturb and threaten with collapse our age-old definitions between the Same and the Other” (xvi). Borges’s list reorders order, and Foucault finds it disturbing:

“What is impossible is not the propinquity of the things listed, but the very site on which their propinquity would be possible. The animals ‘(i) frenzied, (j) innumerable, (k) drawn with a very fine camelhair brush’ – where could they ever meet, except in the immaterial sound of the voice pronouncing their enumeration, or on the page transcribing it? Where else could they be juxtaposed except in the non-place of language? Yet, though language can spread them before us, it can do so only in an unthinkable space” (xviii).

In other words, it is a total fiction, this list, and even if this fiction is enchanting, it is nonetheless unreal and even anti-social. Where could these animals ever meet? Foucault worrisomely asks. 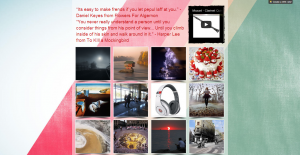 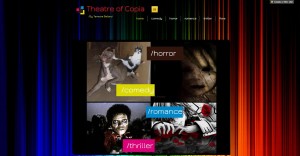 It is perhaps not difficult to imagine a newcomer to Twitter asking nearly the same question. Are these social, communicative gestures we make online not in some sense anti-social? Are these sites we visit and to which we contribute not counter-sites that create fantastically incomprehensible orders of people and things? Fictional orders that exist only in unthinkable spaces? In sharing what we share, do we not make ourselves un-useful by placing and re-placing things that not only distract people (seriously, look at the photobombing animals) but also undermine their understanding of the kinds of connections that are important or possible or true?

Borges urges in another essay, “Let us admit what all idealists admit: the hallucinatory nature of the world. Let us do what no idealist has done: seek unrealities which confirm that nature.”2 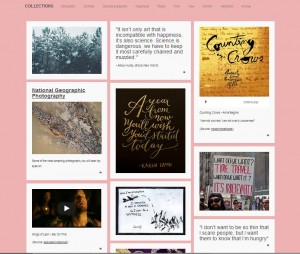 In their curious spatial logic, some social networking sites may perform this kind of idealistic work. I also think the anti-social interface Rabelais constructs in Gargantua & Pantagruel does this kind of work. I would like to figure out a way to encourage my students to both create and give in to the kind of spatial fictions that, even when unreal, are not necessarily untrue. In the two iterations of my commonplace blog assignment, I’ve asked students to think about copia as cultural capital – what kind of use value do commonplaces have? But I think if I do this assignment again, I will spend more time discussing the spatial logic of arbitrary orders of things. To put things in order, as Borges’s Chinese encyclopedia does, with no concern about where these things might meet off the page, seems to me (and certainly to Foucault) to be a radical and disruptive gesture. These gestures are needed in the classroom, because they will likely be required outside of it—required by anyone with any kind of political consciousness, by anyone troubled over the handful of increasingly vocal politicians who insist that the world and everyone in it be ordered in literalistic, easily measurable terms. The contempt these individuals feel for the liberal arts is a contempt for the unpredictability and the disruption of art. But perhaps if they come to perceive the artful orderings and reorderings we create everyday—on and offline—these misers will feel less confident about dismissing entire disciplines. After all, 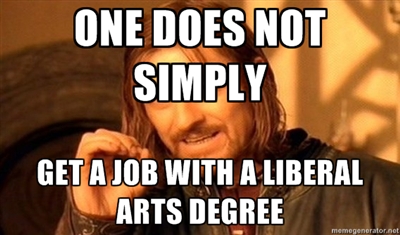 Damn right. One does a lot more than that.

Christine Hoffmann (PhD University of Arkansas, MFA Art Institute of Chicago) studies the shifting standards for credibility and utility that develop inside post-Gutenberg and post-digital rhetorical environments. Her scholarly work has been published in College Literature, the CEA Critic, PLL, the CEA Forum and, somewhat randomly, Slayage: the Online Journal of Buffy Studies. A few short stories can be found in Make magazine, Eclectica and Loose Change. She also blogs regularly on TECHStyle, the forum for digital pedagogy and research by the Georgia Tech Brittain Fellows. Christine looks forward to connecting the teaching of multimodal composition to her research into rhetorics of struggle, cultures of collecting, and the advantages of copious expression.
View all posts by Christine Hoffmann →
Tagged  blogs, borges, commonplace book, copia, foucault, order of things, rabelais.
Bookmark the permalink.