Home » Brittain Fellowship » Seminars » Even If You’re Cool, You Should Ask

Even If You’re Cool, You Should Ask 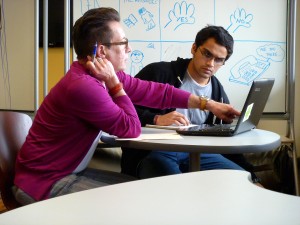 Students rarely glide or gambol into a campus communication center.  There is no samba line to sentence reconstruction.  The run-up to their appearance at the door is pretty simple: they have an assignment looming that entails stringing words together; they need coaching to create a presentation that won’t lead to yawns; they’ve just received a graded paper with a lot of cramped marginalia and little hope.  This is an eat-your-spinach moment in their student careers, and they arrive wishing it’s at least palatable.  Their expressions and body language bear it out–eyes glazed or somewhat focused in the middle distance, and often downcast, a tightened jaw, a shuffled gait to the closest seat, a slump to their shoulders–and that‘s only the ones who arrive knowing they may need our services.  The rest have a steely gaze, and a somewhat defensive stance.  Why should they have to come here?  What could they possibly get out of this experience?  Ah, yes, a trip to the dentist, or vice principal’s office.

To understand the resentment and befuddlement, all you have to do is look inside their heads.  Georgia Tech students are, by and large, engineers.  Data, empirical evidence, discrete numbers, code-writing, hydraulics, supply chain, and digital processing are their signifiers.  Not the hopeless bits of verbiage drooping down a page.  If you have evidence, hard won in lab, or out in the field, why do you need to explicate, extrapolate, explain?  Aren’t numbers enough?  They are, after all, self-evident, right?  Even underexposed civilians can see the findings as illustrated in this pie chart.  Why must I make an explicit written recommendation based on my work?  Can’t you see the right way to go, and my conclusions, based on my graphics and well-labeled screenshots?

And all that time in lab has provided them with one truism:  There is no room for the individual in report-writing.  Not only is it unnecessary to place themselves in a lab report, it is often forbidden, the rationale being that, yes, we know it was the writer who performed the experiment.  And it’s the actions and results that are important, not the actor.  No need to brag.  So why can’t all writing be that way?  Everything can be interpreted as a lab report, they seem to think.  Just last week, a grad student brought in an article he had written for an IEEE journal, so I could review it and read for cohesion and coherence.  (Because of my background in engineering writing, these students are often directed to me.)  At the end of my explanation of why he needed to provide another sentence of evaluation at one point, I stated, “Words are all we have.”  Meaning he needed to insert himself–and his words–once more into his findings.  He gave me a blank stare, but made a note to add another sentence.  I’m sure he went out for dinner later and snorted with derision about that statement to his friends.  Words?  Who’re you kidding?

I have often stated to conferencing engineering students that I can’t see them in their writing, when their appearance and comments are crucial to success in underscoring their point.  How do you feel at this point?  What does this prove to you?  What are your perceptions?  Does this work, in your mind?  Do you present evidence to back up your point?  Have your feelings changed?  What, exactly, are your feelings?  Once I’ve established rapport with them, I deliver these questions in one abbreviated form:  “Where are you here?”  Or, “I can’t see you here.”  That’s what’s lacking often in the writing brought to communication center tutors.  Personality.  I can speak for other tutors when I state, however, we don’t want to use that specific word with our students.  It might open up avenues none of us are prepared for.  We want them to create perceptive prose, not a roving party.  It’s actually personalization we seek.  Provide your findings, give us the evidence, then tell us what we should do with it, how you evaluate it.  I tell engineers that what they’re really doing is being transparent, which, I then go on to say, is key to success in business.  (Once they’ve gone to work, they may find out otherwise.) They respond to the word ‘transparent,’ and then can see their way forward.  It’s the same thing as personalization, and placing themselves in their writing, and, more importantly, they can see the need for it when I express it in these particular words. 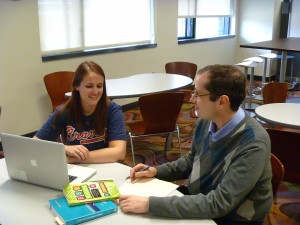 You can’t really blame these student engineers for being in a quandary about their writing.  Their texts are rife with formulas and theory, dense with design and structure.  No cult of personality here, no swift editorializing.  And they go to lecture, where an instructor–who really should know better–proceeds to display PowerPoint slides that look like Brazilian anthills, except streaming with words, not insects.  The power of the well-placed word loses its sway.  And any assertion is relegated to afterthought, after class.  Creating sweeping generalizations devoid of proof is not necessarily what they set out to do, but they get caught up in it.  Fascism is fun.

Once I call attention to their lack of proof or standing or evidence–the absence of personalization–they pause, beset with doubt.  And no user’s manual exists for creating good writing.  Because of the rugged individualism called for in lab or as an intern or co-op, any assistance is foreign and vaguely suspicious.  And asking for help, or another pair of eyes to skim text, may be a sign of weakness.  Weak engineers construct weak bridges.

But then it dawns on them, and I can see it in their eyes:  There’s a way out of the forest of words, and it’s through careful planning and insertion of ideas, kind of like road building.  As engineers, they relate to that part.  I identify places that need work within the document, but, more importantly, show them how to find the weakest writing.  It’s not really hard; just look for an area where you aren’t being transparent, where you aren’t present and accounted for.  Make no assertion without setting the stage.  No algorithm, no matter how beautiful, can stand alone, I tell them.  It has to be given the explanation it’s entitled to.

Once we’re through with the session–never more than 30 minutes–they pack up.  And you can almost hear them thinking, well, that worked out just fine.  I’m glad I asked for help.  You can see they‘re content every time, as they stride out the door with a bit of snap in their step.  That’s a sweeping generalization I stand by.