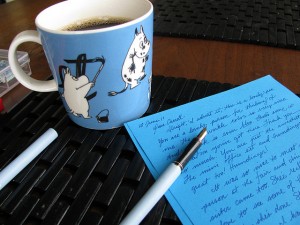 [Prefatory note: As a client-based course, my technical communication class at Georgia Institute of Technology in Atlanta functions like a hybrid between a college class and a consulting firm, with the students working in teams to compose websites, marketing strategies, reports, manuals, and a variety of other artifacts for local nonprofits and small businesses.
For the most part, we have created a lot of useful projects for the real world. Having taught this class for four semesters, I am now better at making those projects genuinely useful by selecting my student teams carefully and helping them avoid major pitfalls. But the handful of failed projects really bothers me. The students still learn a lot—there’s no success like failure, as Bob Dylan sings—but they usually do not receive the grade they wanted, so they are inclined to look at the whole experience negatively. I worry that their anger, disappointment, or shame over the project’s outcome may overshadow the lessons they can take from the experience.

What follows is an open letter to one such team from the recently concluded spring semester. They had set out to implement a content management system for a local elementary school, but a variety of miscommunications delayed and ultimately prevented their project from succeeding. By addressing my postmortem analysis of the project to the team, I’m hoping to impart one last lesson to my students. By publishing it openly, I hope to show Service Learning teachers that these types of classes introduce unique risks, but also unique roles: as hybrids between classrooms and workplaces, they position us as hybrids between teachers and managers.]

This semester, your team was the only one in my three sections whose project didn’t meet its goals, and it would help all of us to know why. I know your theories about it; you told them to me throughout the semester in class and in your progress reports, and you told your client in your final report. The client shared her perspective with me during our evaluation of the project. So here is the perspective of the mediator of that relationship about how it went wrong.

1.  The professionals you were working with communicated with you poorly, and even unethically.

Throughout the semester, the seven of you complained repeatedly that your client wasn’t engaged enough: she was consistently late in scheduling meetings with you and replying to your drafts. This was true, and it did hinder you. The tight schedule of the semester forced us to have tight deadlines, and the class had to move ahead of you a few times while you waited on feedback from her.

Worse, the company that hosts the client’s website misled you about their ability to host the content management system you were trying to implement. When you discovered that the CMS used a different version of SQL databases than the host’s servers, the company initially told you that they could rectify the problem; almost two weeks later, they reneged on their promise, reporting that they actually couldn’t support both versions of SQL. Because we were 2/3 of the way through the semester at that point, you didn’t have enough time to choose and implement a new CMS, so your project was effectively sunk.

The poor communication of the client and the host was unquestionably unfair to you, but I hope you can draw a lesson from this painful experience about the ethical consequences of timing and accuracy in professional communication. By taking too long to reply to you, the client put you in the position of having to constantly catch up. And by making a promise they could not uphold, the host company prevented you from being able to uphold your promise to deliver a working CMS to the client. They made liars of themselves, which made liars of you. Hopefully, you can take these examples of poor professional communication and apply the inverse behavior to your own working lives, so that you are always prompt, and you never over-promise.

As I’ve said, the non-engagement of your client was not your fault. But during the periods in which you were waiting for your client’s feedback, you revealed your own lack of engagement: rather than moving forward, you just waited. That made the client’s delays even more damaging to your progress.

Granted, there were some things that you needed to hear back about before you could move forward, some decisions the client had to make so you could proceed in the right direction. But even bottlenecks can be opportunities. For instance, as soon as you discovered the compatibility problem between your CMS and your web host, you could have researched other CMS platforms to use as potential alternates. While you waited for word from the host company, you would have been making a backup plan in case the problem couldn’t be resolved.

Of course, even I am only considering this proactive option in hindsight; it didn’t occur to me at the time. Which brings me to my third point:

3. I didn’t educate you or your client enough about the rhetorical context of your project.

As the client and I graded the project at the end of the semester, I realized that there was a bigger problem than lack of engagement: lack of a shared understanding about the project.  You inherited your project from a previous semester’s team, who had begun customizing a popular CMS platform on a temporary hosting account. When they tried to migrate their copy of the CMS to the client’s web host, they encountered the same errors you found, but they didn’t know how to identify them. So they left the CMS’s files on the server, complete but not functioning. Because you also couldn’t implement the CMS on the client’s host, and because the previous team’s temporary hosting account had expired, all you could salvage from their work was a handful of custom image files they had created. Most of their work had existed within their copy of the CMS via its built-in customization options, so it was essentially lost. You had told the client about all of this, but she seemed confused at the end of the project about why the CMS seemed to have regressed in its development from the previous semester. What she didn’t seem to understand was that you had to start the process over almost completely, customizing a new copy of the CMS on another temporary hosting account.

I take responsibility for this one. Because I’m the only continuous member of our “company” from one semester to the next, I am the only person who has a continuous relationship with the project.  It’s my job to help you navigate the terrain of your rhetorical situation. What I failed to do in this case was help you emphasize to the client just how much of the last team’s work you had to do over. We should have impressed more clearly upon her that you were re-making, not just revising.

I hope it’s now clear that every actor in this project had a role in its outcome, a share of the blame. And I hope you can learn from these mistakes – your client’s, the web host’s, and mine, as well as yours. Professional communicators respect one another’s deadlines and don’t promise what they can’t deliver. They also work actively rather than reactively, anticipating and mitigating against bottlenecks and roadblocks. And they work to develop mutual understandings of their rhetorical contexts. I’ll remember these lessons, and I hope you do too.

[Editor’s Note: This article is cross-posted at https://teacherweb.ggc.edu/servicelearning/?cat=8.]

Chris Ritter received his PhD from Washington State University in 2010, where he studied digital rhetoric, particularly in videogames. His research interests orbit around games and other digital works' potential expressive, persuasive, and educational roles in struggles for social justice. He has taught first-year composition, 20th-century American literature, multimedia authoring, technical and professional communication, and digital game studies. Currently, his courses teach students the rhetorics of technical communication and web design via service projects for local nonprofits and small businesses.
View all posts by Chris Ritter →
Bookmark the permalink.