Home » Feature » Pieces of What? About a thousand years after everyone else, I came across Feminist Ryan Gosling, and despite having seen only one Ryan Gosling movie—Drive, in which he “Hey’s” nary a girl, but does assault someone with a hammer—I enjoyed reading through the entries. But I knew I was late to the party when I saw the second post on the front page of the blog doubling as an advertisement for Feminist Ryan Gosling the BOOK. It got me thinking about what happens when communications experience a change of venue, when a conversation that begins in one place ends up somewhere quite different. Inevitably you’re not just thinking about the content of the communication when this kind of shift occurs; you’re also thinking about the shift itself and what it means, both apart from the content and in conjunction with it. In the case of FRG the Book, you might wonder, for instance, why FRG needs to be a book at all? Can FRG the Book possibly foster the same degree of feminist-grad-student-solidarity through a static, print publication that it fosters in a continually evolving micro-blog? Can it possibly preserve the easy dispensability of its timely snark?

The impulse to collect isn’t by any means new, of course. Collecting (even when it’s random Gosling memes) is a social act, as well as an act of self-fashioning. Humanists of the 16th and 17th centuries encouraged collection—of both texts and objects—as a way to exhibit one’s learning and social position.  Curiosity cabinets were all the rage. These were massive collections of artifacts gathered from all around the world: plant-life, animal specimens, fossils, coins, relics, works of art, instruments, inventions, etc. Writing of the “culture of collecting” in the seventeenth century, Marjorie Swann notes the ways in which a collection

constructs and embodies new social relations, new alignments of people as well as physical objects. It is this representational flexibility of the collection, its capacity to fuse in various ways the identities of objects and people, things and texts, that made it an attractive cultural form in England during a period of great socioeconomic, political, and cultural change. (12)

I don’t think it’s too much of a stretch to say that Feminist Ryan Gosling attempts a kind of representational flexibility in its capacity to imagine a fusion between feminist identity, seminal feminist texts, and an objectified Gosling. If nothing else, it’s clearly designed with a specific audience, with particular social relations, in mind, and yet new alignments seem possible. People like me who know not much about Ryan Gosling but more than a little about feminism can find things to think about, conversations to join, and maybe people who know a lot about Ryan Gosling but nothing about feminism can discover something, too.

But here’s what I really want this post to be about: I think things get more complicated when what is collected is not a stream of fake quotations from a real celebrity, but a stream of real statements from the general public. Online, it is as easy to find random collections of tweets or status updates from strangers as it is to find pictures of Ryan Gosling. But no one is going to make a book out of racist Hunger Games tweets or 100 Real Tweets from Homophobes Who Would Murder Their Gay Child. These kinds of collections really are quite common. Usually they consist of people making offensive statements, stupid statements, insensitive statements, naïve statements, or all of the above. Herpderpedia collected tweets from internet users enraged by the Wikipedia SOPA protest blackout. WhiteWhine.com searches the internet for complaints about “first world problems.” Literally Unbelievable re-posts Facebook users responding to Onion headlines as if they are true. Old People Writing on a Restaurant’s Facebook Page and dumbesttweets.com pretty much speak for themselves. There are other collections/collectors less fixated on mocking people for making thoughtless comments. Here’s a strange article that assembled tweets from Apple employees reacting to the death of Steve Jobs. A Slate article displays a collection of “orphaned” tweets from Twitter users who signed up for the service, posted once, and never came back.

We can speculate, I think safely, that these sites and stories get noticed because they are, for so many people, NOT representative of the mainstream, but of underlying patterns (of ignorance, often)—patterns brought decisively to the surface on a site like, for example, Hunger Games Tweets, which lists blatantly racist or racially insensitive comments one after another (the creator of the blog makes a distinction between types of comments here). That’s a partial answer to my original inquiry about what happens when communications experience a change of venue. Lone statements of vulgarity or absurdity or eccentricity we might ignore or dismiss take on larger importance when (re)placed in the company of similar statements.

But there are other possible answers to the change of venue question. Again I think it’s worth looking to the early modern curiosity cabinets, for which collectors sought out the rare, the unusual, even the monstrous. Deformations or other irregularities of Nature were in high demand, in part because gathering rarities gave the collector higher social credentials, but also because these collections were constructed as microcosms of God’s creation. If you want to represent the macrocosm in miniature, you can’t leave anything out, not even this: 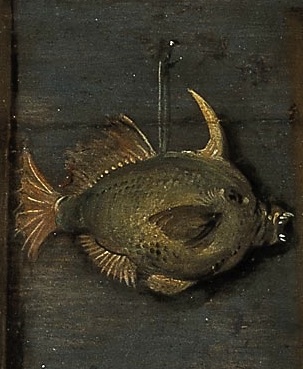 Detail from a painting of curiosities; image courtesy of resobscura.blogspot.com

I’m not suggesting that creators of micro-blogs are interested in representing God’s creation, but with so many sites devoted to shaming or mocking people who utter some pretty monstrous comments, it does seem like we have an interest in gathering up a lot of ugliness and putting it on display. And what is especially curious about our version of abnormality is that it is made out of people, not freakish fish-monsters. The monstrous statements we gather come from people. People who are probably (hopefully?) not monsters and who probably (hopefully?) do not always or even often say monstrous things. People who tweeted or posted these comments and then went back to doing non-monstrous things like eating sandwiches and watching Breaking Bad.

In this book, David Martin talks more about the macrocosm/microcosm relationship set up through the curiosity cabinet, the Renaissance conviction that, since “God had created the world to be known,” the early modern collector/scholar must work to understand “the resemblances and similitudes that bound all things and beings together in an endless series of hidden and secret relationships…” (38). That’s all things—the good, the bad and the ugly. Collection according to this philosophy was really re-collection, Martin explains:  “collection-as-reclamation” (37). Even fake, forged, or fraudulent artifacts—monsters that weren’t really monsters—had a place in the early modern collection as microcosm, something that, Martin says, can be difficult for modern audiences to understand:

In this age of scientific transparency we would see the magic of the unicorn horn dispelled by its revelation as a walrus tusk; the prized bezoar is revealed to be mere dross…, and the mermaid nothing more than … the torso of a monkey stitched onto the tail of a fish…. Yet in an age of curiosity, where the sign can (and has to) form multiple associations with the objects it resembles and has sympathies with, the notion of exposing the forgery ‘for what it is’ becomes somewhat of a hollow exercise…. When the task of the scholar was to get objects to speak of the truth that was hidden within them, a truth that only the object itself fully ‘knew,’ illumination came through the act of unpacking the microcosmic collection, of arranging the words of the text of creation so that one might interpret the signatures inscribed within all things. In this setting, the fake often pointed to higher truths. (44-45)

I’m not sure about this, but I think it might be possible to shed the overtly Christian belief structure Martin is explicating in these quotations and hang on to the part about the “resemblances and similitudes” binding things together in disorderly, perhaps not even fully discoverable relationships—and then apply that theory of interpretation to all these crazy tumblr sites that also make the “mistake” of collecting monsters who aren’t really monsters.

I don’t want to be an apologist for racist or careless Hunger Games readers. Nor do I want to suggest that on the opposite side of something ugly something pretty always lives. But I do see potential in the idea that the ugliness we find collected on these sites might point to something besides itself. If collection is, after all, a social act, capable of fusing together people with people, and people with things, then we can certainly ask who and what are being fused together through sites that re-collect and re-place random online chatter. Who is being invited into what kind of group, and who is being excluded? What kind of community is being documented, what kind of community is being shaped, and where do they overlap?

In his analysis of Renaissance curiosity cabinets, Martin’s emphasis too is not on the individual utility of the collected items, but on what (else or other) they might point to. It was “in the unpacking of the collection, that illumination could be found” (43). It might be worth unpacking the collections linked above, remembering that all of these tweets and updates migrated from somewhere and someone else, that they are all still vibrating with their own motility, that, hidden behind the obvious “look at all these idiots” narrative foregrounded by the sites’ collectors—a narrative we at times might sympathize with easily—is a narrative resistant to such unproblematic categorization.[2] One that recognizes the grossest anomalies as, like it or not, linkages in a rhizomatic system of exchange.

This semester I’m teaching a course on unreliable rhetoric, so online communication is obviously going to be a topic of discussion. Right now I’ve set aside an entire unit on Ugliness, and I’m hoping to clarify some of these ideas before I bring them into the classroom. If you have any comments or suggestions, or if you’ve run across other digital collections, then Hey (Girl), please share!

[2] I want to single out the creator of the Hunger Games Tweets site, who seems to have given much more thought to both his purpose and his audience than any of the other site creators, and whose blog is less one dimensional as a result.

Christine Hoffmann (PhD University of Arkansas, MFA Art Institute of Chicago) studies the shifting standards for credibility and utility that develop inside post-Gutenberg and post-digital rhetorical environments. Her scholarly work has been published in College Literature, the CEA Critic, PLL, the CEA Forum and, somewhat randomly, Slayage: the Online Journal of Buffy Studies. A few short stories can be found in Make magazine, Eclectica and Loose Change. She also blogs regularly on TECHStyle, the forum for digital pedagogy and research by the Georgia Tech Brittain Fellows. Christine looks forward to connecting the teaching of multimodal composition to her research into rhetorics of struggle, cultures of collecting, and the advantages of copious expression.
View all posts by Christine Hoffmann →
Tagged  blogs, collecting, curiosity cabinets, humanism, social media, soundbites, Twitter.
Bookmark the permalink.