A New Home for the Writing and Communication Program 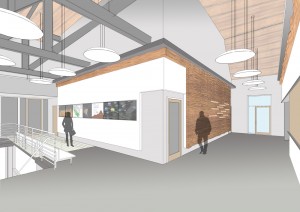 As many of you will recall, the Hall Building was dedicated fall 2010 by Mrs. Pamela M. and Colonel Stephen C. Hall, USAF (Retired). The Halls have been staunch supporters of and friends to the Writing and Communication Program. In a moving speech made on the day of the building’s dedication, Col. Hall explained his commitment to the Ivan Allen College of Liberal Arts and the Writing and Communications Program saying that “the language elevates” and “writing and presenting are not optional” (Ivan Allen College of Liberal Arts website).

Over the past months, a group of representatives of the program, led by Rebecca Burnett, and including Hugh Crawford, Rachel Dean-Ruzicka, John Harkey, Diane Jakacki, Ken Knoespel, Carol Senf, Jesse Stommel, and Robin Wharton have worked in tandem with the architecture firm Smith Dalia, members of the Facilities and OIT departments to develop an open-concept space that both reflects our pedagogical philosophies and encourages collaboration among instructors and students. 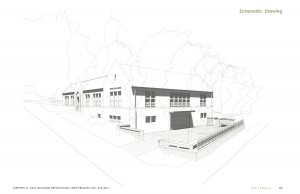 The building will feature two super-smart classrooms for 25 students each, presentation /screening spaces, as well as office and conference space, collaborative work environments and a new DevLab. It will also house the Brittain program, with office space for 16 of the 36  Brittain Postdoctoral Fellows.

From examinations of workplace ergonomics to negotiating importation of new technology into the classrooms, to choosing chair and tile samples, the group’s work has been thorough and exciting. The opportunity to think about how we do what we do and how best we can realize our pedagogical objectives continues to be exciting.

Stay tuned for updates on the progress being made on the building.

Diane Jakacki received her PhD from the University of Waterloo, where she specialized in early modern printed drama, and participated in federally-funded digital humanities research projects. She has published two articles on applying social semiotic methods to early modern theatre history, an edition of Wit and Science, and co-authored an essay on developing digital image annotation tools. She is a software consultant to imageMAT and the Records of Early English Drama. At Georgia Tech she applies digital humanities methods to pedagogical solutions. Jakacki is currently developing researching the Elizabethan clown Richard Tarlton and his touring relationship with the Queen’s Men troupe.
View all posts by Diane Jakacki →
Tagged  Georgia Tech, Hall building, pedagogy, Writing and Communication program.
Bookmark the permalink.