Changing Places: Moving the Classroom to a Collaborative Space 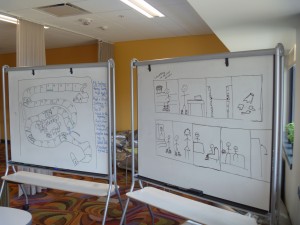 The groups made full use of the collaborative space of the CommLab. They used the white boards, made use of the bean bags for discussion, and used the available Smart Board for displaying some of their work.

The class went really well, and I felt that having the students work together on this project during class time, subtly, changed the dynamics of the class. The whole class became friendlier and more vocal after working on this class project. Just moving to a neutral space outside the classroom and trying to incorporate different ways of looking at a literary work made a huge difference to the participative aspect of the class for the rest of the semester. I am glad I tried the class project out!