On Tuesday, March 14, Georgia Tech hosted a screening of the documentary CODE: Debugging the Gender Gap. The 2015 film, which played at various film festivals and tech events such as the 2015 Grace Hopper Celebration of Women in Computing, examines the lack of gender diversity in the American software industry. As the film’s promotional literature explains:

Tech jobs are growing three times faster than our colleges are producing computer science graduates. By 2020, there will be one million unfilled software engineering jobs in the USA. Through compelling interviews, artistic animation and clever flashpoints in popular culture, CODE documentary examines the reasons why more girls and people of color are not seeking opportunities in computer science and explores how cultural mindsets, stereotypes, educational hurdles and sexism all play roles in this national crisis. Expert voices from the worlds of tech, psychology, science, and education are intercut with inspiring stories of women who are engaged in the fight to challenge complacency in the tech industry and have their voices heard. CODE aims to inspire change in mindsets, in the educational system, in startup culture and in the way women see themselves in the field of coding.

The screening, which was followed by perceptive and thoughtful responses from Barbara Ericson (Director of Computing Outreach and Senior Research Scientist, College of Computing), Mark Guzdial (Professor, School of Interactive Computing), and Jessica Rosenfield (a third-year senior in Computer Science), was sponsored by the Writing and Communication Program; the Center for the Study of Women, Science, and Technology; the College of Computing; and the School of Literature, Media, and Communication. 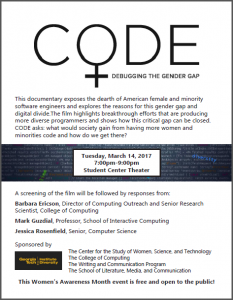 Flyer for the March 14, 2017 screening of CODE: Debugging the Gender Gap

As one of the co-organizers of the screening, I was motivated to bring this film to campus by my time working in the tech industry, as well as my experiences teaching computer science majors at Georgia Tech. Having worked in the software industry prior to coming to Tech this past fall, I can attest to the pertinence of the film’s subject matter to startup culture. At one startup where I worked, I was, for over a year, the only woman in the engineering department. While I found the developers and quality assurance analysts with whom I worked to be amiable co-workers, unlike them, I had to deal with a manager who referred to me not by name, but by the pseudo-Ryan Gosling-esque “Hey, girl.” When I questioned why the company, which prided itself in its “culture,” had so few women and people of color on staff, I was told that it was a “pipeline problem,” as, for instance, only 18% of recent computer and information science degrees granted in the U.S. were held by women. Notably, the makeup of my company’s technical teams was even less diverse than the cohorts of computer science graduates whose demographic data was used to compile these statistics.

The disproportionately small percentage of computer science degrees held by women and minorities is one of the issues CODE examines, and, although Georgia Tech is considerably more diverse than my former company, I was still surprised to see how few women there were in my classes. I teach a two-semester sequence of technical communication courses (LMC 3431/2) taken in conjunction with the junior capstone course sequence in computer science project design and implementation (CS 3311/2), which means that the majority of my students are majoring in computer science and/or computational media. A quick check of the Georgia Tech Fact Book’s page on Undergraduate Enrollment by College, Ethnicity, & Gender assured me that the demographic makeup of my class sections were not anomalous in terms of the overall enrollment for these majors; as of Fall 2015, only 22% of undergraduates enrolled in the College of Computing identify as female.

A “group of five” from HBO’s Silicon Valley

To add to the pronounced gender gap in my course enrollments, I found that many of my students embraced racial and gender stereotypes about their chosen field. During a lecture on stereotypes in popular perceptions of computer programmers, I showed a clip from Silicon Valley, a satirical HBO series on tech startup culture, that depicts a tech executive suggesting that software programmers “always travel in groups of five” and then listing an assortment of all-male racial and physical stereotypes. These include a “tall skinny white guy, short skinny Asian guy, fat guy with a ponytail, some guy with crazy facial hair, and then an east Indian guy…it’s like they trade guys until they all have the right group.” Although the show is meant as satire, a number of my students (all male) exclaimed, “that’s how it really is!” even though the presence of their female classmates and instructors would indicate otherwise. 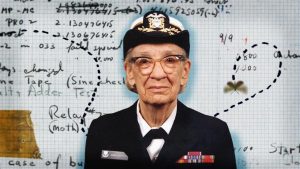 As CODE shows, such stereotypes have far-reaching affects on how women and girls see themselves in relation to computer programming. When CODE’s filmmakers interviewed groups of preteen girls, they asked the girls “What does a coder look like?”; the majority of answers indicated that a coder is male. The film suggests that the prevalence of such answers—and of such stereotypes—are some of the many conditions that are steering girls way from programming before they even get to college. Furthermore, CODE argues, history indicates that computer programming was not always so gender exclusive. Figures such as Ada Lovelace (credited with writing the first computer program) and Grace Hopper (credited with developing a number of programming languages and coining the term “bug” to describe a system glitch) are famous primarily for their contributions to computing. As far as sheer numbers go, a much higher proportion of  programming jobs were held by women in post-WWII America compared with today, and as recently as 1984 the approximately 37% of B.S. degrees in Computer Science were granted to women. 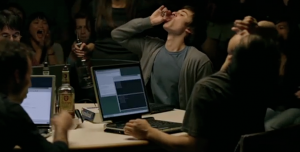 A scene from The Social Network depicting “brogrammer” culture: a hacking competition with required tequila shots

Alongside its critique of the array of influences that currently keep women and girls from getting into computer programming in the first place, CODE also explores why women are leaving computing jobs at a disproportionately high rate. As one might expect from Susan Fowler’s recent blog post detailing her experiences at Uber as a site reliability engineer, sexual harassment and gender discrimination are identified as significant contributors to this exodus. While CODE covers specific and well-known incidents such as the 2014 Gamergate controversy, it also pinpoints more pervasive ideological movements as contributing to hostility towards women in computing. Among these, the concept of “the brogrammer” is perhaps the best known. Referring to a movement in tech that has appropriated a perceived “frat boy” culture as a form of resistance to longer-standing “computer geek” stereotypes, the brogrammer was popularized in mainstream culture by the 2010 film The Social Network, where women primarily serve as love interests and pour tequila shots while the (male) programmers drink, code, and start companies. Although brogrammer culture has long been critiqued as sexist in its portrayal of women, I would argue that it is stereotype that potentially pressures all programmers into patterns of behavior that they might not otherwise adopt. While I have seen such pressure exerted among my students in a number of ways, it has manifested most literally in a group of (five) students who chose a project team name of “The Brogrammers.”

As future workers in the software industry, then, many of my students will potentially (and perhaps already do) find themselves on one end or the other of identity-based devaluation, exclusion, harassment, and discrimination. As a tech comm instructor, part of my job is to prepare students to identify and assess the rhetoric of a given situation and respond appropriately; to my mind, this must include situations that arise from gender and racial gaps in the industry in which they will work. Bringing up such topics within the classroom is not, however, done without risk. Some students resist spending time on anything other than the 1s and 0s of their current project. Others read such discussions as liberal “identity politics” intruding on what they feel should be an apolitical STEM classroom or attacking their own perspectives on the software industry. Still others are desperate for a forum to discuss such matters, but are terrified to do so in a class where they feel that their perceived race, gender, sexuality, or politics may already single them out.

In screening CODE at Georgia Tech, we thereby offered our students a space outside the classroom where they could productively engage with these issues. While the film itself provided a common starting point, the more valuable takeaways, to my mind, were the conversations that followed: the conversations among our formal respondents, who expertly critiqued and expanded the film’s assertions; the discussion prompted by audience questions, which recast the issues at hand in light of the specifics of the Georgia Tech campus and its geographical region; and the conversations that took place in the smaller groups that formed afterwards, where I heard the voices of some of my students who to this day have never spoken publicly in class. These were conversations that acknowledged that while no one film, class, or talk has an easy answer to the complex problem of the diversity gap in tech, we have options beyond dismissing the issue—as a “pipeline problem” or otherwise—or silently tuning out everything except the 1s and 0s.

National Center for Educational Statistics. “Degrees in computer and information sciences conferred by degree-granting institutions, by level of degree and sex of student: 1970-71 through 2010-11.” Digest of Educational Statistics, July 2012, nces.ed.gov/programs/digest/d12/tables/dt12_349.asp.

KellyAnn Fitzpatrick is an Affiliated Researcher (and former Brittain Fellow) at Georgia Tech, where she formerly taught Technical Communication courses for Computer Science and Computational Media majors. She is also a full-time analyst at RedMonk, a developer-focused tech industry analyst firm, and has previously worked in the software industry as a QA analyst, test & release manager, and tech writer. To leverage the unique opportunity afforded by her simultaneous affiliations in academia and the tech industry, KellyAnn is authoring a series of articles focusing on the role of technical communication in both spaces. To foster cross-disciplinary and cross-industry access to the series, related articles will be co-published on TECHStyle and on KellyAnn’s RedMonk blog.
View all posts by Kelly Ann Fitzpatrick →
Tagged  code, digital pedagogy, gender, gender gap, pedagogy, technical communication, technology.
Bookmark the permalink.