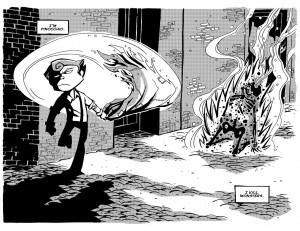 The overarching theme of the first comics symposium is multimodality. Comics have always been considered a multimodal genre, combining as they do the “sequential” visual language of comic panels with written forms of communication. In the beginning of the twenty-first century, however, comics are also becoming more and more enmeshed in an increasingly multimedia world. Both Marvel and DC are now run by multimedia corporations: Disney and Time-Warner respectively. Furthermore, dwindling sales are forcing comic artists to adopt digital mediums to distribute their work more widely. This first symposium will ask how changes in technology have and are impacting the identity of comics and graphic novels. Presenters discuss how comics relate to film, video games, radio, photojournalism, writing, and medieval illuminated printing.

1:45-3:00 Atlanta Comics Creators: “Supervillains, Poverty, and the Perils of a Career in Comics”
Van Jensen – Writer of Pinocchio The Vampire Slayer
Andy Runton – Writer and Aritst of Owly