As the start of an on-going series of reviews, Jesse Stommel here discusses L. Andrew Cooper’s recently published book Gothic Realities: the Impact of Horror Fiction on Modern Culture (2010). In this and future reviews (which will include reviews of both publications and presentations), we hope to engage in dialogue with the subject of the review, so if you have questions for Dr. Cooper about his work, please post them in the comments section below. 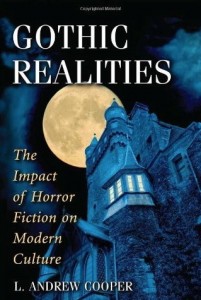 L. Andrew Cooper writes in Gothic Realities, “Gothic fictions give form to social phenomena . . . but they are not the culpable cause for the phenomena’s reality” (19). This is what I see as the thesis of Cooper’s book, an idea he traces across continents and through four centuries, from Mathew Lewis’s Gothic novel The Monk (1796) to James Wan’s “torture porn” film Saw (2004). Cooper’s approach to literary criticism and theory is rooted in time and place, aware of cultural and historical dimensions, but not limited by an excessive reverence for geographical distinctions or historical periods. And while his work is attentive to the differing effects of various media, he does not focus on one medium at the expense of all others, moving instead deftly from Gothic novels to contemporary film, touching also on news media texts, popular non-fiction, video games, etc. He explores his central questions in a focused (and sometimes personal) way, using all the critical and theoretical tools at his disposal.

When he writes that “gothic fictions give form to social phenomena,” he suggests that literature and film have the ability to influence reality–that stories can (and do) inspire real events; however, his use of the word “form” suggests that they can also make reality manifest in a more material way. As he points out here and elsewhere, stories of violence can’t be blamed for real acts of violence (fictions can “cause” but are not “culpable”); nevertheless, they do help us (or change the way that we) read, experience, and interpret reality. Our understanding of reality, and our determinations about what is and is not real, depend on literary tropes. We have become so accustomed to the conventions of literature and film that we often won’t recognize reality as real if it doesn’t obey literary conventions. Cooper discusses this with reference to ghost fictions, remarking that they (and other Gothic fictions) have “sought a degree of mimetic authenticity, a way to make their fictional ghosts seem real by making their attributes conform to popular expectations” (118). He later calls this a “parasitic technique” (127), or perhaps a more symbiotic one, given that he also says that “the fictional and the true borrow from and shape one another” (118).

These remarks remind me of Andre Bazin’s famous remarks about film realism in What is Cinema?: “The photograph as such and the object in itself share a common being, after the fashion of the fingerprint” (15). For Bazin, film is an asymptote of reality, in constant relation to reality but never quite subsuming it. His use of the fingerprint as a metaphor is telling, because it suggests that film and reality touch one another in a material and intimate way. Bazin continues, “Every image is to be seen as an object and every object as an image. Hence photography ranks high in the order of surrealist creativity because it produces an image that is a reality of nature, namely, an hallucination that is also a fact” (16). Gothic Realities flirts with similar descriptions of the relationship between Gothic fiction and reality, and like Bazin, Cooper never settles on an exact description of the nature of the relationship, ending the book instead with the very provocative (and even frightening) notion that “the Gothic will keep on intruding on our realities, giving shape to the violence we see, believe, and do” (207). Again, there is this notion here that the Gothic gives “shape,” that it can “intrude,” and that there is necessarily a distinction between what we “see” and what we “believe.”

Given that Gothic Realities is about the relationship and play between the two phenomena of Gothic fiction and reality, it is a clever structural decision that the book is broken into four parts with each part containing two chapters in dialectical conversation. For example, in “Part 2: Gothic Sexualities,” Cooper pairs a chapter about the birth of homosexuality in Gothic novels and sexology of the nineteenth century with a chapter that analyzes how this discourse plays out in contemporary horror films. Here, the book hits a high point in a chapter titled “Romps in the Closet: The Persistence of Nineteenth Century Notions in Contemporary Pop Culture.” It’s the chapter that both inspired me most and raised the most questions for me as a reader. (In fact, I wrote almost an essay’s worth of commentary in the margins of this chapter, which is a clear sign that the chapter is doing its work.)

For example, in this chapter, Cooper writes, “Reclaiming the queer, the homosexual, and the monstrous as a viable and valorized category of identity isn’t a simple, finite act. Queer theory has been celebrating queerness for decades, but the same queer celebrated in rarefied (and rare) academic circles faces a very real physical threat on Main Street U.S.A.” (83). This quotation comes in a section about (and critiquing) reverse discourse, and Cooper talks at length about the problems with recuperating both the queer and the monstrous. Queer theory, though, often insists that the queer disrupts rather than reverses discursive constructions. Likewise, reclaiming the monstrous does not merely upset the hierarchical binary of good/bad; rather, celebrating the monstrous has the ability to dismantle this binary (and others) altogether. In this sense, queerness and monstrosity don’t reverse signification; they short-circuit signification.

What I find so elegant and exciting about Cooper’s Gothic Realities is the way that it leaves space for exactly this sort of marginalia, encouraging me as I read to engage (on the page) in my own thinking about film, queer theory, and horror. Cooper’s work inspires contemplation, invites discussion, and opens the field in important ways for further consideration of the relationships between Gothic fiction, contemporary horror film, and real violence.