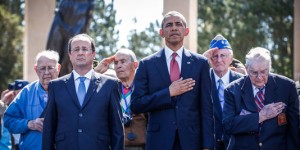 In his D-Day speech on the beaches of Normandy, French president Francois Hollande not only paid his respects to the some 150,000 Allied soldiers who sacrificed everything to bring one of the world’s most tyrannical regimes to an end. He also declared that it was time to recognize the sacrifice of the 20,000 French civilians who perished on D-Day, June 6, 1944, and in the following months of the Normandy Campaign.

In the past fifteen years, I have spent ten D-Day anniversaries in France and, as a student and teacher of all things WWII and French Resistance, I have always watched the whole ceremony on French TV and discussed the Normandy invasion with French colleagues, family, and friends with great enthusiasm. This seventieth anniversary of “the longest day” was one of the most spectacular I have witnessed. Highlights included a dance performance with an elaborate decor, which created an effect of never-ending waves of men who tried to come ashore in a storm of hostile bullets. Against this backdrop, Vladimir Putin, Petro Porochenko, Queen Elizabeth, Barack Obama, Angela Merkel, and other dignitaries peacefully sat together in perhaps one of the greatest moments of political tension among these powers since the end of the Cold War.

Perhaps Hollande’s respectful nod to civilian victims was intended to send a message to present-day warring countries, represented at Normandy by these various heads of state, criticizing such ruthless tactics such as drones, which can’t always decipher if humans moving on the ground are terrorists or innocents. It may have served to remind Ukraine and Russia of occupation’s deadly price. Hollande’s declaration could have been directed at France itself, a country in which recent elections brought the Front National, the extreme right party, whose founder is a reputed Nazi-sympathizer, into important positions of power.

What is certain among these possible hypotheses is that recognizing civilians reflects the increasing diversification of this sacred memory. On the 70th anniversary of D-Day, Hollande looked out at a crowd that included a demographic of dignitaries, veterans, families, and, yes, civilians who represent the memories that traditional WWII commemorations have consistently neglected. Merkel’s attendance called attention to the thousands of women who served as nurses, wire operators, spies, and soldiers. Native Americans were present and held a conference the following day in nearby Tilly-sur-Seulleson their forgotten role in WWII. Obama stood for thousands of African Americans who, due to America’s segregation and racism, received medals of honor only 50-60 years after 1945, and were horribly treated during and after their service. According to Marie Louise Roberts, author of the controversial book What Soldiers Do. Sex and the American GI in World War II, 139 out of 152 cases of military rape in France were attributed to African American soldiers even though they made up only 10% of the forces. Unlike their white counterparts, who were imprisoned, the African Americans were erroneously tried and mostly hung in public, perhaps, as Roberts suggests, to ensure consistency with the American South’s segregationist policies and illicit lynchings. This is to say nothing of the lifelong damage done to the violated women.

Seventy years do nothing to tarnish the memory of the American, Canadian, British, and other allied soldiers who sacrificed themselves for what would become the beginning of WWII’s end in Europe. In seventy more years, we must continue to polish the white crosses of the Normandy cemetery and dance in remembrance of the some 150,000 who landed on France’s beaches in one of the greatest acts of bravery in combat history. My French family and friends agree that they will always be indebted to the Americans who did indeed save them despite present-day political strain between the two countries. Yet seventy years has also been too long to let a large part of the victims and heroes go unrecognized in the well-deserved legend of this battle, which didn’t last one day but continued for months, its aftermath lasting decades. Obama, in his own speech, called the D-Day shores “democracy’s beachhead,” a place to crystallize the price paid for freedom, a price most of us hope to never pay again. However, part of this price included the high number of civilian deaths, sexism, and racism.

Let us not forget the ways our forefathers and mothers from all ethnic backgrounds navigated their way through the Normandy Campaign and WWII. It is time to remember everyone who fought and perished in this beautiful corner of France during one of the most violent but most triumphant moments of human history.