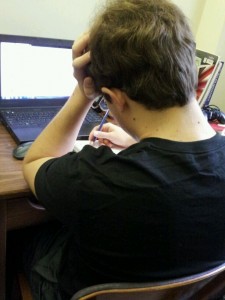 Writing in itself is an aesthetic art not merely acquired, but more so felt. To say the least, writing is not baseball, and you cannot purely practice to become better. There comes a point when your grammar, style, diction, and syntax may create the ideal writing, but can still be completely lacking that which is considered great writing. I believe there is no artist who has composed an appreciated masterpiece, who had not wholly loved and felt the writing to be dear to his or her own self first.

This is not to say that writers do not practice themselves in mechanical or clever ways, or else we would not become so enticed by the wit and metaphoric illusions created by poems such as “The Flea” by John Donne. We would have no interest in writing that had not first some sort of creative innovation or applied basic principles in eloquent writing techniques. Generations ago, innovative writing seemed practical and today’s generation blames it on originality. They say that they cannot write novel pieces because everything there is to write about has already been written. Perhaps though, the flaw is not the topic, but rather the source of originality that first begins in each of our minds.

Rene Descartes supposes in his Discourse on Method that all our thoughts originate in a higher source, which he names God. He then, too, supports the claim that our thoughts are but weak vessels only sponging off the higher source, unable to create any single thought that was not first thought by someone else. I find it hard to agree with such statements because of individual interpretations. Suppose that the common topic is given to two students with no guidelines or restrictions. Will they not both write according to their own beliefs and experiences? In Descartes’ era, perhaps this belief could not be attributed any credit because everyone was supposed to believe the same way. However, now it is quite obvious that morals and beliefs differ depending on environment. Therefore, we can conclude that the creative spark can ignite from any source, independent of common topic and dependent on individual minds.

Nicholas Carr in his article “Is Google Making us Stupid?” would also disagree with Descartes. He writes about a feeling of “tinkering with [the] brain, remapping the neural circuitry, [and] reprogramming the memory.” Instead of the proposition that all of our thoughts originate from a higher source, he addresses the idea of a sort of pool of information. To better understand this claim it may be helpful to read from Andy Clark an David Chalmers, who have first identified and defined “The Extended Mind” and the way that our minds think through other objects. The object that Carr refers to is the internet and its seemingly endless pool of information. One can simply type in any search engine a question, a word, or a number and instantly relevant articles and webpages appear. While Carr focuses on his reading skills, it is also evident that it affects our writing skills. Of course we cannot begin to write anything of worth if all of our sources begin with us typing into Google what we would like to write about. Whether or not we realize it, we are programming our minds to operate in ways that are familiar. There are studies done with the “muscle memory” function: after you shoot a free throw in basketball a certain way so many times, your body will remember it. In the same way, after thinking the same way so many times, our minds will remember it. If we wish to write a personal experience about the wind outside, should we not go outside and experience it first rather than Googling how the wind makes other people feel?

So far in our generation it has become increasingly obvious that originality is no longer a concern. When we exclaim we have writers block it is not because we are lacking in information, but rather in inspiration. Today’s technologies have made it painfully easy to forget what common day philosophy rejoices in–thinking in thoughts that disregard opinion. Clicking on external links online limit our thoughts because they form a predisposed opinion for us, regardless of whether we agree or not because our muscle memory has already stored what we have read safely in our mind to be recalled any time the subject arises. An overwhelming bloom of masterpieces would occur if only we would realize that we are tainting our minds before we even get to smell the flower.