Home » Teaching » Digital Pedagogy » Myth in the Classroom – A monthly column about challenging stereotypes while teaching literature, communication, and the oral tradition

Myth in the Classroom – A monthly column about challenging stereotypes while teaching literature, communication, and the oral tradition

This is the first installment of what I’m hoping will be a recurring discussion about breaking students of a nasty habit: the tendency to rely on harmful preconceptions when engaging with literatures, cultures, and traditions that they aren’t very familiar with.  In the title of my column, I’m using “myth” in two (of the many) meanings of the term: as stereotype (a widely circulated falsehood); and as culturally significant narrative (a local, communal, or national “true” story).  My research explores the way twentieth-century US writers of color incorporate culturally specific mythic narratives in their literature.  When I bring aspects of this research into the literature and communication classrooms, I inevitably come up against significant hurdles: some students fall short in their literary or rhetorical analyses because they cannot see or read through the thickness of stereotype; some students’ feelings get hurt when other students (often unknowingly) express stereotypical views about cultural traditions that aren’t their own; and some of the more confrontational students trigger my own defensiveness when they unapologetically recycle generalizations that verge on racism. As I think through these challenges here on TECHStyle, I hope to come up with some useful pedagogical practices to meet them head on, and I also hope to hear from you about successful strategies you’ve used to tackle similar situations. 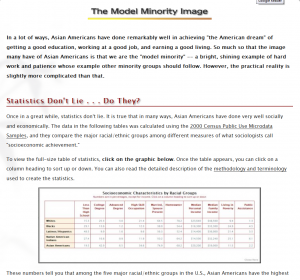 Last week, I assigned the students in my English 1101 course, “Race, Technology, and the Secrets of American Success” to look at this website prepared by C.N. Le on the model minority myth.  We have been talking throughout the semester about the unpleasant labor history of the United States, the way the nation’s exceptional technological advancements (eg. the model T, the transcontinental railroad, the digital age, etc) have come at the expense of an exploited minority labor class.  (This is at least the point I’m hoping to get them to by the end of the semester.  I haven’t announced it as an explicit thesis of the course.)  Some students have balked at my persistent critique of the dearly held American Dream (that anyone can achieve anything as long as he or she works hard enough)—or, rather, at the critique I’m encouraging through the readings they’re doing in labor and immigration history, race and whiteness studies, and American literature, from Benjamin Franklin to Maxine Hong Kingston.  Reading Theodore Roosevelt’s “Expansion and Peace” in conversation with Filipino American Carlos Bulosan’s “Be American,” for example, has allowed students to hear the voices of those Roosevelt deemed unfit for American citizenship but fit to be “civilized.”

In any case, I was both nervous and excited to take on the model minority myth in my classes, the demographics of which are quite diverse, especially in terms of the representation of international Asian and Asian American students.  The most lively but also tensest class was the first of the day—and I think it colored my approach for the remaining two sections.  During the discussion, several white and African American students expressed widely held stereotypes about Asian Americans—the very ones that Le attempts to complicate: Asians work harder than “us”; Asians value education over social lives; and Asians don’t know how to be creative because they’re just number-crunchers.  (We would revisit each of these in the next class when I tried to get students to hear the exceptionalist and Orientalist rhetoric of this article in Wired magazine about outsourcing.) 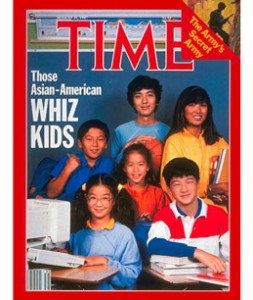 One particularly troubling account came from a student trying to argue on behalf of the model minority myth (in other words, that it isn’t a myth but an actuality).  He explained that both the valedictorian and the salutatorian at his school were Asian, so that must prove… something.  Another was that since the Japanese tend to commit suicide over not doing well enough in school and Americans tend to commit suicide because they’re worried that they’re unliked, that means Asians are hard-workers and Americans are more creative.  I asked him if he wasn’t sure those supposed trends rather indicate that Americans are more insecure about whether or not they’re popular, not how creative they are.  It was both instructive and troubling to see how far leaps of judgment can take you if you know where you’re trying to end up.  This leads me to a very pressing question I have about responding to such comments in the classroom: What do you do when students bring up these kinds of “studies” or “data” that you’re not familiar with?  In this case, I was able, I think, to expose the faulty leap in judgment the student was making, but in other cases, it’s not that easy.

Despite the discomfort I, and, I’m sure, some of the other students, experienced in reaction to these comments, what made them somewhat productive rather than detrimental was that one of my Korean American students was willing each time to respond thoughtfully by either warning about the limitations of generalizing about individuals based solely on race or culture or else offered examples to counter the generalizations.  I appreciated this student’s willingness to do the difficult work that I otherwise often find myself doing: attempting to complicate students’ assumptions without making it look like I’m calling them racist.

The next two classes weren’t quite as provocative, and I think I’ve figured out why.  These times, most students wanted to avoid the burdensome role of stereotype-buster, of having to repeatedly suspend the discussion to dispute assumptions so pervasive, so rampant that they’re in the air we breathe.  So I took the reins.  In my attempt to preempt the inevitable hurtful comments, I went ahead and exposed the flawed logic of the model minority myth—summarizing and expanding upon Le’s argument—rather than allowing the students to work through it on their own.

In a belated attempt to invite them in as more active contributors to the discussion, I asked the students where they see images of the model minority myth being expressed in popular culture.  To my surprise, they couldn’t think of any.  It was just a given.  The days of Charlie Chan are gone—but something more stealthy, more subtle, more insidious remains.  I asked students to analyze the rhetoric of this Fortune magazine article from 1986 about “America’s super minority” who are “smarter and better educated and make more money than everyone else.”  I don’t think it takes much to hear the alarm bells sounding: “Watch out!  They’re coming!  They’re on your heels!  The Yellow Peril is back!”  It took a little while to get to this point, though—to get past, “Well, if it’s saying something positive, then it’s a compliment, not a stereotype.”  In Episode 90, “The Chinese Woman,” Jerry Seinfeld’s character—whom I otherwise find quite right most of the time—was wrong when he told Elaine that he wasn’t being racist if he said he liked Asian women.  But this is a difficult argument to make to eighteen-year-olds.

I think the most productive part of the discussion occurred when I asked students what the use-value of the model minority stereotype is and why it is that we are all familiar with the image of the smart, hard-working Asian but not the image of the exploited Asian immigrant women in the San Francisco sweatshops, whom they had read about in the rather challenging article “Work, Immigration, Gender” by Lisa Lowe.  This question got students thinking about the stereotype as rhetoric—as an argument useful for bolstering the American Dream: that anyone can rise from rags to riches, no matter who they are—and, more specifically—no matter what race they are.

I think the greatest challenge I’m facing this semester—and that I’ll always face—is getting students to see individuals as part of a cultural and historical legacy.  So that when the valedictorian of their class is of Asian descent, they’ll understand that intelligent, hard-working individual as an individual first but also as a participant in social forces greater than all of us.  This doesn’t mean that certain people are innately gifted in certain areas and lacking in others—even if repeated refrains of American exceptionalism tout otherwise.  I guess what I’m after is developing students’ historical imagination that can contextualize patterns and trends rather than make of them foregone conclusions.

Again: a challenging thing to do for students who can hardly remember life before Wikipedia.

Sarah Eden Schiff is a Marion L. Brittain Postdoctoral Fellow at the Georgia Institute of Technology. She received her PhD in American literature from Emory University in May 2010 and taught courses in American literature and composition at Agnes Scott College in the 2010-2011 school year as a Visiting Assistant Professor. Schiff is currently working on a book project that considers the way myth—a reputedly conservative narrative form—is put to use in radical ways by minority US writers in the 1960s-1980s. She has published on such authors as Philip Roth, Octavia Butler, and N. Scott Momaday and enjoys incorporating her interdisciplinary studies in religion, anthropology, and history into the literature and writing classrooms.
View all posts by Sarah Schiff →
Tagged  historical imagination, stereotype, teaching race in the writing classroom.
Bookmark the permalink.