Myth in the Classroom (or the column formerly known as such) 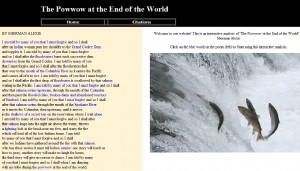 After a longer-than-anticipated hiatus, I return to discuss something relatively far afield from myth. Instead, I want to share an assignment that my students recently completed, because it was relatively painless for me to teach and grade and relatively productive at getting students to learn the difficult skill of close reading.

I often tell (read: nag; cajole; harangue) my students to pay attention to all of the little details of language, to notice how the most seemingly insignificant choices that the author makes have significant effects on the text’s meaning.  I’ve found in the past that teaching close reading with poetry is often the best approach, since poetry (at least good poetry) is able to jam as much meaning as possible into the smallest amount of space.  So I often begin my courses with poetry and a discussion of close reading: what it is, why it’s beneficial—even to aspiring engineers.  (Being able to discern the tone that their email is conveying if they write it in ALL CAPS, for example, is a useful skill for them to have.)  We also often spend a number of the earliest class periods doing close readings together.  However, I would always struggle when it came time for the students to perform a close reading as a high-stakes assignment.  The conventional papers I asked them to write were often disappointing.  Students struggled to organize them either by literary elements (eg. “There’s a lot of alliteration in this poem, such as here and here and here”) or as line-by-line readings that ended up feeling rather repetitive and monotonous and repetitive and monotonous.  And, no matter how much time we’d spent discussing and doing close readings in class, many students would still end up turning in five-paragraph essays that were more akin to thematic interpretations than close readings.  (“Since the beginning of time, man has quested after woman.  In this poem, that quester becomes the questee.”)

So, since I’m at Tech, I decided to ask students, in groups, to put one of the poems we’d read in class on-line and perform a hypertext close reading of it.  That way, they could turn the poem’s lines into hyperlinks, allowing them to focus and comment on many elements of the poem at once.  Because their close readings were on-line, and therefore more interactive and dynamic, they were, I believe, far more successful than my past assignments.  The students really seemed to get it this time.  I had far fewer students turning in discussions of a poem’s “theme,” and, because of the medium they were working in, they were given a lot more room and maneuverability to focus on the small details of language.  In the process, they came up with some really impressive interpretations of the poems that I had often missed, or at least read quite differently.

This is mostly to show (off) some of the work my students did, so you can use their sites as models in your own classes if you’re interested in doing something similar.  (This was one thing I wish I’d been able to do: to give my students an example of what I was expecting of them beforehand.)  And it is also to highly recommend setting up workshops with Alison Valk, our glorious multimedia librarian, who trained my students in Dreamweaver and pointed them in the directions they needed to go to produce these sites.  Some of the students did have significant experience working with Dreamweaver and other coding programs beforehand, and I have a feeling that these students were the ones who completed the brunt of the programming for this collaborative assignment.  (This, of course, is one of the advantages and disadvantages of group work—perhaps a topic for a future post.)

One final note before we get to the websites themselves: I required that my students host their close readings on their prism spaces.  I wanted the playing field to be equal for everybody, and I wanted them to recognize that the Georgia Tech URL lends their work a certain level of academic credibility.  I’m curious to hear how others deal with this issue, because I know there are a number of free website builders out there that allow anybody to host and design a site with them, but, to me, that seems to defeat the purpose and challenge of the assignment.  I told my students that I did not expect any fancy design elements.  I just wanted their sites to be clean, accessible, and authoritative.

Below are some of the best ones.  Enjoy!

Sarah Eden Schiff is a Marion L. Brittain Postdoctoral Fellow at the Georgia Institute of Technology. She received her PhD in American literature from Emory University in May 2010 and taught courses in American literature and composition at Agnes Scott College in the 2010-2011 school year as a Visiting Assistant Professor. Schiff is currently working on a book project that considers the way myth—a reputedly conservative narrative form—is put to use in radical ways by minority US writers in the 1960s-1980s. She has published on such authors as Philip Roth, Octavia Butler, and N. Scott Momaday and enjoys incorporating her interdisciplinary studies in religion, anthropology, and history into the literature and writing classrooms.
View all posts by Sarah Schiff →
Bookmark the permalink.