Ever since Baudrillard found his way into my dissertation (I have no memory of inviting him—suddenly he was there, like Jack Nicholson in that picture at the end of The Shining), I’ve been curious about how he’d fare in an undergraduate classroom. His postmodern and Nietzschean sympathies make him entertaining enough, provocative enough, to pique student interest, but more than that, Baudrillard is someone who believes that writing can reflect theory. I think that makes him ideal for a multimodal composition instructor wishing to demonstrate how form and content can work together. When you can see theory reflected in the writing, it becomes less abstract, and certainly less difficult to teach. Deleuze and Guattari’s theory of the rhizome, for example, was much easier to introduce to students when I could open up A Thousand Plateaus and say, “Look, this book is written like a rhizome! And it’s about rhizomes! It’s like a coffee table book about coffee tables that turns into a coffee table!”

Deleuze and Guattari are rather wonderfully adamant that “[t]here is no difference between what a book talks about and how it is made” (A Thousand Plateaus 4). And Baudrillard seems to agree, confronting the paradoxical, enigmatic, highly ironic experience of simulation by writing in an enigmatic, paradoxical, highly ironic way; when he laments the disappearance of symbolic exchange, he often writes these laments as short, poetic, epigrammatic nuggets that you can, ironically, imagine plucking right off the page and exchanging with the person sitting next to you (Not that I’ve ever done this; the closest I’ve come was last 4th of July after the young boy standing near me and watching the fireworks exclaimed, “It’s like a video of a firework!” I welcomed him to the simulacrum, but I don’t think he heard me).

Admittedly, Baudrillard gave me a harder time in the classroom than Deleuze and Guattari. Since the theme of my course this semester is protest and activism, I chose to assign Baudrillard’s In the Shadow of the Silent Majorities; the nuggets are less nuggety in this early work, which means my students spent less time appreciating the synergy of form and content and more time just trying to figure out what the content meant. Meanwhile I found myself in the awkward position of trying to sell Baudrillard’s accessibility without diminishing his complexity.

Students caught on pretty quickly that no small part of Baudrillard’s agenda is to make intentionally provocative statements (see The Gulf War did not Take Place) for the sake of making intentionally provocative statements. Part of his design (to paraphrase Mike Gane) is to return no less paradoxical replies to the paradoxes with which the media landscape confronts us. But this insight into methodology can deteriorate pretty quickly into oversimplification: “Oh, I see; this guy’s just trying to confuse me. So it’s okay that I’m totally confused and I don’t get it. That means I get it!”

This was my apprehension, anyway. So one challenge became figuring out how to validate student’s instincts about Baudrillard’s game-playing without at the same time giving them permission to dismiss him as completely unserious and irrelevant to anything except The Matrix. The most obvious, goes-without-saying way to meet this challenge is simply to continue devoting class-time to discussing Baudrillard’s ideas, to keep reinforcing the argument that this provacateur within his maddening hypotheses about the social (it never existed; it did exist, but not anymore; it does exist, and more so than ever) is worth discussing in a class devoted to investigating activism inside, outside and alongside digital environments.

Below are a few of the more specific methods I used in my attempts to teach Baudrillard effectively and memorably, some of which may translate to other theory-based classroom activities. 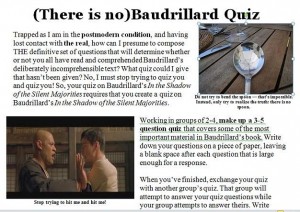 2. Blogging: My second blog assignment for the course asked each student reader to discuss a favorite or most exasperating quotation from Baudrillard’s In the Shadow of the Silent Majorities, and then to make a word cloud of at least 10 key words and phrases associated with the text. More than any activity, this one proved my apprehension over inadvertently giving students permission to dismiss or oversimplify Baudrillard unwarranted, as I hope the following excerpts demonstrate.

“The world is aiming at a definitive non-event,” (Baudrillard 115).

This quote comes from the 4th part of In the Shadow of the Silent Majorities. Written over 20 years since the first publication of Baudrillard’s classic, this section is more contemporary in its use of examples. It also bases a large part of its arguments on the events of September 11th. I chose this quote because it relates to the hysteria of the media and the irony of terrorism, two things that really annoy me. Baudrillard points out that counter-terrorism and constant fear end up “internalizing terror” rather than calming it. Basically, people are becoming more and more paranoid through the efforts of counter-terrorism, which allows the initial terrorism to succeed. Exaggerated media focus distracts the masses with its constant simulations of fear and makes them numb to a reality that may no longer exist. Efforts around the world to prepare for every future situation or catastrophe prove that the masses are just a great big neutralizing weapon. Essentially, a non-event future signals the end of history.

Without Resistance — Posted by Nick Johnson

This quote comes from a larger section about how the masses resist the influence of the media. He argues that traditionally, the message of the media is resisted by misinterpretation of meaning: “reinterpreting messages according to the group’s own code and for its own ends.” (63) This implies a sort of selective blindness by the group doing the interpretation. In contrast, this quote states that the masses accept every message unconditionally, without even considering its meaning. This is a different tactic: instead of trying to modify the message by selective interpretation, the masses drown out all messages by allowing them to pass freely.

This complete lack of resistance has two effects. First, because messages are no longer filtered by meaning, those with meaning are no longer special. The media exists (in theory) to provide information and meaning, but when it no longer matters whether this is accomplished or not, they lose their purpose. In a sense, by freeing the media from their obligation to reality and relevance, the masses remove the only thing holding them up, so they then rationally devolve into purposeless spectacle, which is easier to create and more cost-effective.

Second, because every message is accepted, there is a saturation of communication that interferes with itself. Imagine a room full of noisy people; if you were to measure the amount of communication being done in that room simply by how many words traveled through the air, that room would be very information-dense. On the other hand, once the noise is loud enough, no conversations could be properly heard, and the actual amount of communication would drop to zero. This is increasingly the state of the media, which tries to pull opinions in increasingly many directions.

To me, this seems like a relatively coherent argument. It definitely explains the trend in mass media toward spectacular and meaningless content over information and neutrality, although the idea that this devolution is caused by consumers who don’t care about the informational content is hardly unique to Baudrillard. However, by characterizing the “masses” as a sort of malevolent (or at least purposeful) entity that is actively trying to resist the influence of the media, I think he gives an interesting perspective: perhaps the media are actually digging their own graves by catering to the masses, instead of being manipulative. At least we can laugh at them as the social collapses.

“Beyond meaning, there is fascination, which results from the neutralization and implosion of meaning” (Baudrillard 105).

I was particularly drawn to this quote because of its parallels to science and because it is not pessimistic! By saying that “beyond meaning, there is fascination” Baudrillard is implying that an interest in something is always more powerful than knowledge because interest opens the door for knowledge that has never even been discovered yet. With the words “which results from the neutralization and implosion of meaning” Baudrillard is saying that in order to discover new knowledge, one must be neutral or unbiased, and one must draw connections from multiple sources. With this quote I believe that Baudrillard is essentially summarizing the factors that have contributed to most of the scientific discoveries of the human age…

“Information devours its own contents; it devours communication and the social” -Jean Baudrillard

Baudrillard’s main message seems to be that the media and technology have gotten to a point where we have “too much” information to the point where it loses its meaning. Technology is increasing the availability of communications and for the same reason as above, interactions have lost their meaning and we now communicate just for the “ecstasy of communication”, meaning just for the interaction itself. I think that by this quote, Baudrillard meant that this information overload that we live in has brought about the self-destruction of information itself. Due to the media, we now have so much access to it that we lose its meaning. According to Baudrillard, this is what has transformed society into “the masses”, or the “silent majorities”. He claims that we just mirror media, but the media is supposed to be a representation of reality, so we are no longer living in reality. We have essentially “entered the Matrix”. I somewhat agree with Baudrillard on this point, although I normally try to keep a more positive outlook. I do think that the sheer number of communications and interactions we have on a day to day basis via technology is taking the meaning out of real interaction, and a face to face conversation now usually involves texting or some technology hindering the very communication it was designed to encourage. He relates this quote to his broader point that society and meaning are imploding- information and society are being devoured by information itself while the masses stand by silently. 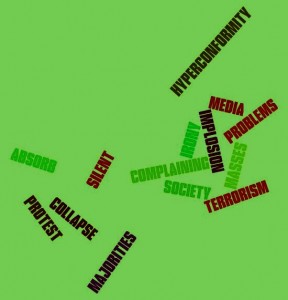 3. Low-Tech Transformation Exercise: Building from the blog assignment, I asked students to look closely at the most popular terms from their word clouds and construct an alternative visual or textual relationship between the words: 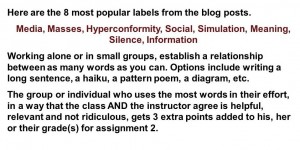 I was once again impressed by the way some students managed to capture the curious, paradoxical mix of playfulness and cynicism that is a hallmark of Baudrillard’s work. Some examples follow: 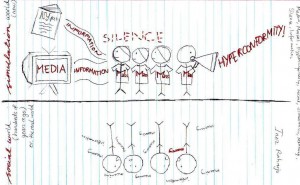 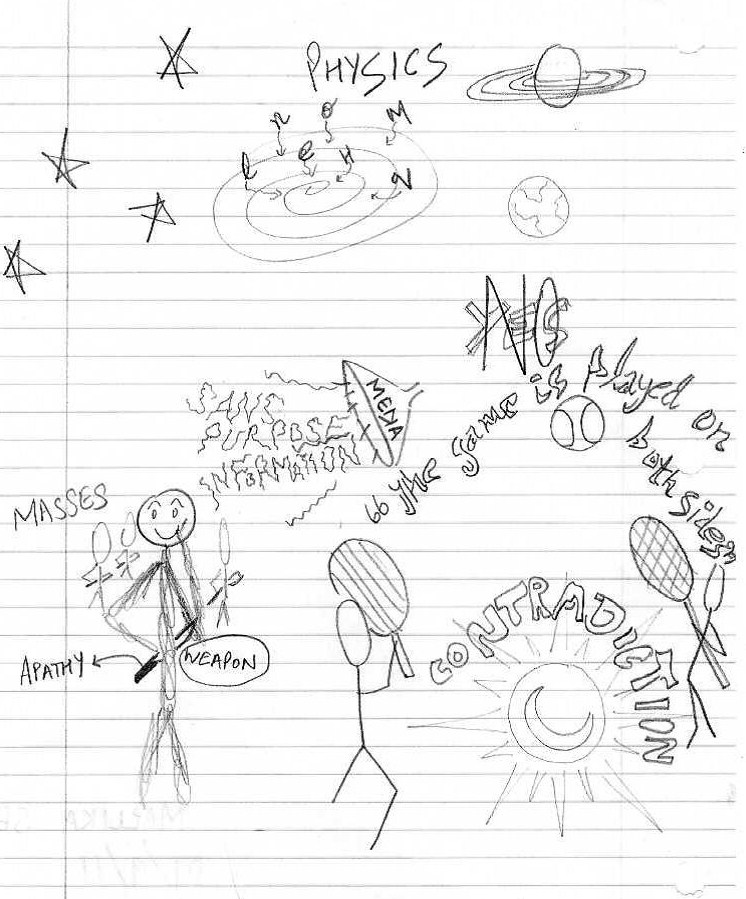 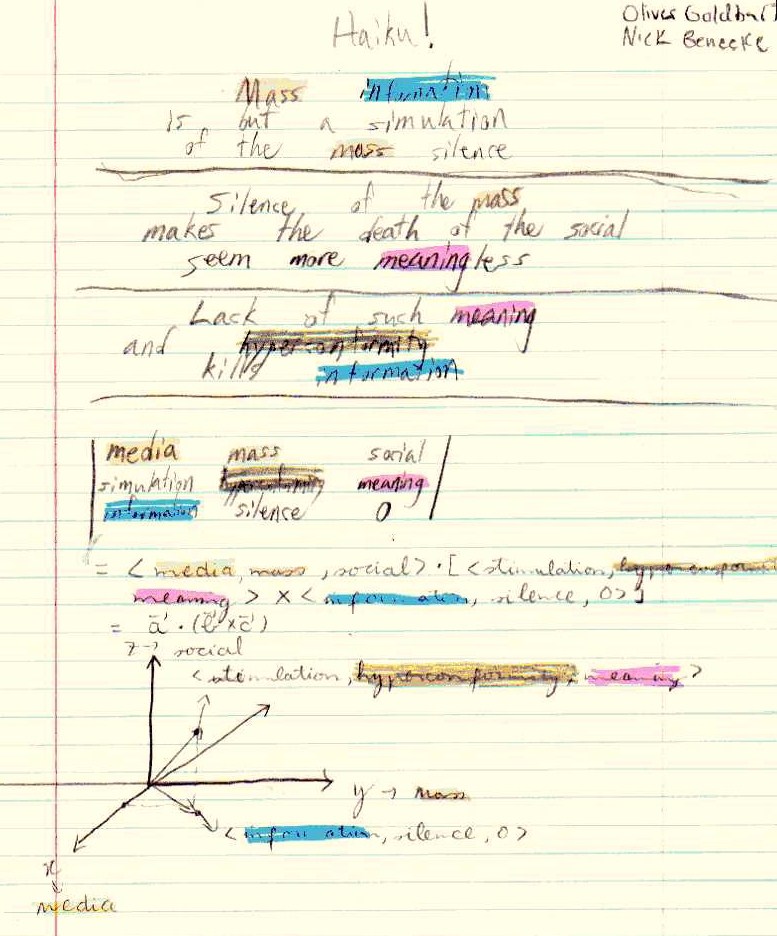 Christine Hoffmann (PhD University of Arkansas, MFA Art Institute of Chicago) studies the shifting standards for credibility and utility that develop inside post-Gutenberg and post-digital rhetorical environments. Her scholarly work has been published in College Literature, the CEA Critic, PLL, the CEA Forum and, somewhat randomly, Slayage: the Online Journal of Buffy Studies. A few short stories can be found in Make magazine, Eclectica and Loose Change. She also blogs regularly on TECHStyle, the forum for digital pedagogy and research by the Georgia Tech Brittain Fellows. Christine looks forward to connecting the teaching of multimodal composition to her research into rhetorics of struggle, cultures of collecting, and the advantages of copious expression.
View all posts by Christine Hoffmann →
Tagged  theory.
Bookmark the permalink.