Home » Feature » Semiotic Domains and System Design in The Classroom

Semiotic Domains and System Design in The Classroom

Abstract:
The creative student in the Digital Humanities classroom.
What does it mean to be a “creative” person in a digital era? Standard practice in the humanities is to divide “critical” activities from “creative” ones.

This post is the first in a possible series on the creative student in a digital humanities classroom, wherein I discuss approaches to multimodal projects available in a digital humanities course, as well as the varieties of creative experience available to critical writing. Here, I address the method of conceiving a classroom space as a particular “semiotic domain” (Gee, 2003) in order to aid students in visualizing their physical environments as potential spheres of learning. As an extension, I consider teaching videogames as a complete, complex domain for composing arguments.

Quantitative/Qualitative Spaces
In What Videogames have to teach us about learning and literacy (2003), James Paul Gee describes the spaces of possibility extant in learning environments. Gee dubs these spaces “semiotic domains” to indicate that they are best described by a system of signs. That sign system networks communication modalities both linguistic and extra-linguistic: media, writing, and non-verbal communications, for example, are brought together (interfaced). Teachers of multimodal composition should find Gee’s terminology useful as it collects the behaviors of the modes into a conceptual frame. The concept of the semiotic domain intends a structured space whose features can be described by their quantities as well as their qualities. By teaching students that encounters with any modal space — from writing, to the classroom, to navigating a skateboard on campus — requires an understanding of that space’s rules, they begin to understand how those rules allow them visualize the manner in which they must intellectually engage with a learning environment.  For example, the map in a gaming environment helps users to navigate narrative space.  Using such a “game setting” in a class would help teachers describe sign systems that construct the rhetoric for a semiotic domain.

Identifying the key features of a semiotic domain in a quantifiable array removes some of the mystery in decoding new systems. Additionally, it helps students understand the implicit arguments of a structured space. In the Digital Humanities classroom, multimodal composition is best approached by first realizing the formal affordances of a particular mode and its advantages over another platform. In our course on narrative in videogames, Dr. J. Stephen Addcox and I parse the various zones of informational signs that belong to formal spaces. For example, we consider the particular behavior of the classroom environment — how the seats are organized, how the room is spatially designed, where the instructors need to go, where students go, how a shared vocabulary develops — to demonstrate the coordinating affects of any physical space. Quantifying and organizing these normally assumed (implicit) positions systematizes the process and furnishes descriptive features in order to establish a working grammar for that system. As an extension of this model, we examine the sign systems of videogames to show that those practical structures are essentially the same.

Practical Applications
Teaching Fireproof Games’ popular tablet game series The Room, we discuss how skeuomorphic design asks its player to interface with environmental objects — tables, keys, buttons, levers, and boxes — as if those things were real models and miniatures. The digital interface emulates mechanical procedures to allow a player the feeling of control over those environmental objects. To excel at the game, a player must learn how to navigate and manipulate a three-dimensional model. Gameplay is contingent upon order and position; to be “good” at the game, one needs to be able to navigate properly, efficiently. 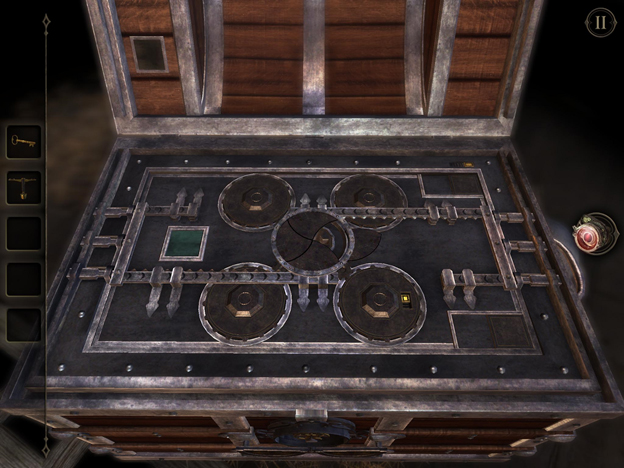 An in-class lab asks students questions about the fundamentals of game navigation. In this particular situation, what user behavior is appropriate for successful completion?

From the operations of the game, one could furnish further claims related to the procedural rhetoric of the game and then proceed with a discussion of the elements that guide those operations or are affected by those operations. Ian Bogost’s procedural rhetoric theory helps immensely for this. For example, I might make a comparison to language by communicating the purpose of a prepositional word or phrase (in, on, above, behind, in front of, etc) and describe the game interface from that perspective: puzzles are contingent upon spatial relativity. This might also lead me to consider the overall narrative movement: as the player orders these boxes and glyphs, they are allowed to advance their own position in the game, to proceed to further game spaces.

Class Grammar
Getting students to visualize real and virtual spaces as learning environments comprised of dependent sign systems helps them understand the complexity of system design. There’s nothing easy about writing on games, because unlike a traditional text (say, a novel) games are spaces of hybridity: a lot “happens” in “games” besides play, and those other particulars must be considered when fashioning investigative statements about their purposes (cf. Aarseth, “A Narrative Theory of Games,” 2012). By dissecting games into proper formal categories contingent upon their genre (such as narrative design, interface mechanics, or flow of play), we can apply descriptive features of language to the moving parts of a complete system. Engineering linguistic features produces a useful grammar for that unique system as well as furnishing the classroom’s shared vocabulary and discourse. 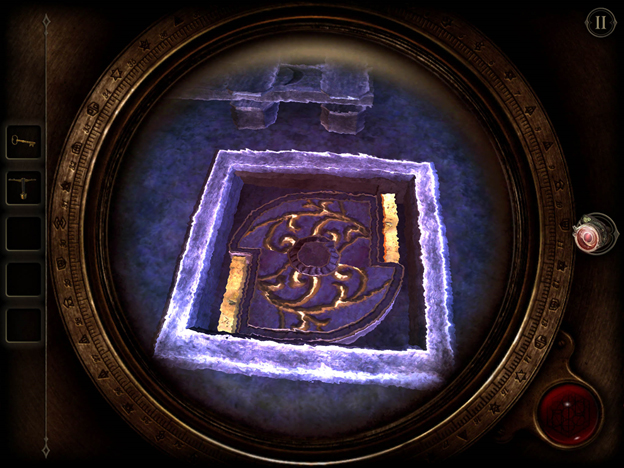