Home » Feature » Tech, No to Tech, Yes: How a Former Technophobe Becomes a Digital Teaching Fellow

Tech, No to Tech, Yes: How a Former Technophobe Becomes a Digital Teaching Fellow

An ongoing series by new Brittain Fellow, Rebecca Weaver
I am a new Brittain Fellow in Digital Pedagogy at Georgia Institute of Technology, where I teach a 21st Century version of First-Year Writing. This class focuses on the WOVEN curriculum, a broader curriculum of communication than that of traditional writing classes, and heavily emphasizes technological tools to develop those communication skills.

You might think by this disclosure that I am a digital native / well-adjusted digital immigrant, comfortable with all aspects of new technology, able to rattle off app names and affordances and build multi-use platforms.

Not true. I’m comfortable with a number of pretty basic and commonly used apps, but I don’t even know what a multi-use platform is. Or even if that is the right name. So how did I get here?

In the 1990s television show Northern Exposure, Ed becomes very uncomfortable when confronted with the possibility of using a computer:

That was me, clammy-palmed, desperate to get away.

So how did a former computerphobe come to teach at a place that emphasizes technology and be (somewhat, with flashes of panic) comfortable with it?

The fear and confusion began in 4th grade, the first time I ever saw a computer: 10 year old me at a new school with newfangled greenscreened machines. Each box under the screen had a little metal plaque which said “Apple IIC” on it. I think it was the Roman numerals that scared me most. We didn’t have anything with roman numerals on it at my house except for classical records.

I learned that computers were Important. They weren’t just tools; they were expensive, holy, and magic objects, capable of who knew what then. They required elaborate rituals involving a soft piece of cloth that Mrs. Bundy collected at the end of the period in a plastic pouch, rituals that if performed incorrectly, would cause suffering. I feared that the Oregon Trail game we played in the computer lab at the end of typing practice just kept going on without us, and Cousin Bill would die in a gruesome and vividly blue river-wagon accident. 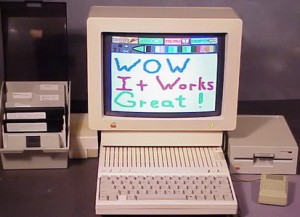 This fear decreased only slightly as I grew up. My mom hoped that I might have better proficiency than her at typing (she paid people to type her papers in college), but didn’t know that computers were the future.  She also passed on to me a somewhat diminished version of her confusion and anxiety about new technology.  In 5th grade, she bought me a brand new electric typewriter. In my family and my neighborhood in the mid-80s, electric typewriters were expensive and fancy. The expense and fanciness of computers were unfathomable, and we couldn’t imagine ever having one, or why someone would own one. I remember marveling at a friend’s computer skills in 7th grade; we worked on a group project at his house, and I watched him type, enter commands, and sift through floppy disks with incredible speed. I was confused and a little frightened. It only occurred to me to be jealous later when I got home and looked at the electric typewriter.  It suddenly seemed so plain.  I knew at that point that computers would be a part of my educational future, but had no idea how. In high school, we were sometimes taken to the computer lab (with brand new Mac Classics) to work on papers, or were allowed to work on the computers alone during lab hours, but the sense I got from this was that computers were Special tools used at Special times for Special reasons, not everyday objects. The only people who didn’t seem to feel this way were the guys who spent every spare moment in the lab. They were nice enough, but I wanted to be outside, and I didn’t understand their compulsion.

The sense that computers are fragile, moody, and vengeful things still comes to me at times; yesterday I had trouble understanding how to get all of my students onto one blog, and in my mind’s eye, I saw Uncle Bill’s feet slip closer to the blue, blue water.  Computer anxiety is a real phenomenon, even among those in the privileged areas of business and academia, as shown in a recent study by Nikos Bozionelos .  Given my early history with computers, I’m pleasantly surprised at how well I’m adapting (that is, not panicking) to the steep tech learning curve of the Brittain program.

What I understand now is that my initial dread at learning a new app (will I break it, will things blow up, will things beep at me?)  looks a lot like my students’ initial dread at receiving a new writing assignment. I’m happy to realize that in this case, I practice what I preach, which is to dive in and start somewhere, knowing now I can always go back and edit, or revise, or delete and start over.  This doesn’t mean I’m no longer skeptical, or that I feel fully comfortable using all of the tech available to my classroom.  It means that I have learned to take a breath and to tell myself that it will be ok.

In my next installment, I’ll discuss what else this change means to my own teaching and learning prejudices and comfort.

Rebecca Weaver, _TechStyle_ chief editor for school year 2014-15, received her PhD from the University of Minnesota and an MFA from Hamline University. Her research is on discourses within poetry communities and institutions, especially in moments of conflict. Her teaching specialties are American Literature 1850-present (with a focus on poetry Contemporary American Poetry and Poetics and American Poetry 1850-present), Creative Writing, Service Learning, and Literature for Non-majors. Her composition / communication courses tend to focus on discourses of higher education and community. Her manuscript about the discourses and conflicts of poetry communities in the 1970s is under review. She is also working on two poetry chapbooks.
View all posts by Rebecca Weaver →
Tagged  TechNoToTechYes.
Bookmark the permalink.