Home » Teaching » Assignments, Lessons, and Exercises » The “This I Believe” Essay and Orality in the Classroom

The “This I Believe” Essay and Orality in the Classroom 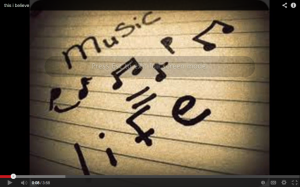 I use the personal “This I Believe” essay as a means to develop and appreciate oral language skills in the classroom. My students script their essays keeping in mind that they will be submitting their essays in an audio-visual format. I have found that this project has a profound impact on how the students compose their essays. The oral aspect of the essay changes their writing and presentation skills in subtle, but positive ways. Students who hitherto struggled with putting their thoughts down on paper, on blogs, or on websites, magically produce well-crafted, creative, impressive audio-visual projects. It seems as though a change in medium has a beneficial impact on the way some students conceptualize and produce work. Also, using the essay in a course that largely stresses written language skills, I find, leads to an understanding and appreciation of the much-neglected oral aspect of language.

While writing is relatively new (most sources put the invention of writing down to around 3500 BC), we have had spoken languages for millions of years. Some researchers, like Ray Jackendoff  discuss how language could have begun as sign language. Modern-day gesture is considered to be a remnant of that once non-spoken language.

Many languages in the world are not written down. My first language Tulu, for example, is a language that currently has no script in common use. Researchers who work on Tulu talk about the lost script of Tulu, but, as of now, Tulu speakers do not put their language in writing. A Tulu speaker comes from an oral rather than a literate culture. The language is full of narratives, songs, and epic poems like the Siri epic that takes 25 hours to narrate. In the absence of a script, these oral outpourings of a culture have been passed down through memorization over several generations.

Walter J. Ong in his 1988 book, Orality and Literacy: The Technologizing of the Word  (Walter J. Ong, Orality and Literacy: The Technologizing of the Word. New Accents. Ed. Terence Hawkes) explains that the structure of oral narratives is such that it facilitates easy storage and retrieval of information. Ong writes that the lack of a linear plot structure, the use of flat characters, and focusing on interaction with the audience help to foreground the elements of an oral narrative and make them easier to remember.

After writing was invented, there was no longer a reliance on memory. Ideas and news were no longer constrained by face-to-face encounters. They could now be transmitted far and wide to many more people.  Ong says that with literate cultures, narratives do not need to be structured mnemonically. Consequently, the narratives of literate cultures tend to follow a linear plot-line, make use of heavy subordination, and are structured such that the narrator/writer and reader are detached. Writing distances the originator of a thought from the receiver. Writing does this by enabling the existence of discourse “which cannot be directly questioned or contested as oral speech can be because written discourse is detached from the writer” (78). ).  Things were no longer necessarily written in order to be read out loud. Ong suggests that print encourages closure, a feeling of finality that was never present in, for example, oral storytelling.

Many theorists believe that  we now have hybrid orality, where we have moved from the TV, radio, and phone to the internet with its mix of visual, written, and audio modes. Alexis Madrigal, writing in the Atlantic, says that social media may be a throwback to the oral cultures that preceded the printing press. We won’t return to an oral culture, but thanks to the almost conversational quality of social media such as Twitter, our literacy, according to Madrigal, will never be the same. Megan Garber  writes that the digital sphere calls for a new paradigm of communication, one that relies on text even as it sheds the mantle of textuality—a paradigm we might call “Twitter.”

Orality in the Classroom

Students in our classrooms come from a variety of language backgrounds and cultures. Some of them come from cultures where expertise and skill in the use of the vocal mode of communication is prized. Faced with an environment in which the written mode is stressed and upheld, these students struggle to express themselves within the linear expectations of a print culture.

Arnetha F. Ball, in her 1996 paper on the Expository Writing Patterns of African American Students, writes that like many other diverse students, African American  students bring rich resources to the classroom in the form of orally based text design patterns, the inclusion of audiences in their writings,  and their ability to draw on culturally-based idioms and expressions and personal anecdotes to enrich their work.

Shirley Brice Heath’s seminal 1982 paper, What no bedtime story means: Narrative skills at home and school, pointed out how children are socialized in different ways within their home communities. Her comparative study of three communities revealed that the communities differed in their patterns of language use and in the paths of language socialization of their children.

As these and other studies have demonstrated, a classroom that provides students different modes in which they can adequately and satisfactorily express themselves is a classroom where learning can take place at all levels without discrimination.

The Audio-Visual This I believe essay 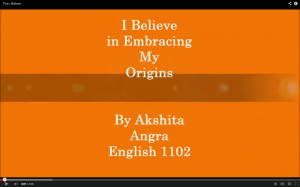 My students go beyond putting down their thoughts in neat paragraphs on paper. They use Audacity or Garage Band to create audio essays  or use YouTube to host their visual essays. The audio-visual “This I believe” essay, I have found, is not only a good way to ensure that I am hearing all the diverse voices in my classroom, but also that my students appreciate and celebrate these voices. Many of my students go on to be finalists at the This I Believe essay contest at Georgia Tech. Scripting their essays, knowing that they will be submitting them to the class in an audio-visual format, I believe, empowers the students to explore their beliefs and motivations more honestly and expressively.

My experience with the assignment has been very positive.  Here is the Assignment sheet and Rubric I use.  I believe that incorporating an audio-visual assignment, such as this one, in the classroom not only builds on the strengths some  students already bring into the classroom, but also challenges students to explore new skills.

Tagged  hybrid orality, orality, this I believe.
Bookmark the permalink.