One of my challenges in teaching students is that they often don’t get a lot of my references. I’m sure many teachers have had this problem: jokes that you think are hilarious fall flat, or mentions of pop-cultural figures that you assume are common knowledge end up getting blank looks. But this problem also extends to literature that assumes a certain degree of cultural or historical knowledge on the part of the reader.

So, I decided to make “getting it” the theme of an entire course. I called it “What Was The 20th Century?,” and the idea was for students to use literature as an opportunity to trace some narrative, cultural movement, or social development from its 20th century origins to our own—and their own—era. To that end, I chose readings, films, and television shows that were themselves retrospective. Instead of literature that was actually published in the 20th century, I used recent historical fiction that was set 30 years, or 50 years, or 100 years, in the past: Jennifer Egan’s 2010 novel A Visit From The Goon Squad (set largely in the 1990s);

Using these retrospective visions was my way of helping students to see themselves as cultural historians, since all of these texts asked readers, in very different ways, to make comparisons between earlier decades and today’s world. In addition, contemporary documentaries such as The Weather Underground; the film treatment of Allen Ginsberg’s poem “Howl”; the first episode of AMC’s Mad Men; and Ondi Tinomner’s documentary about social media pioneer Josh Harris, We Live in Public, provided similar opportunities to look back on history self-consciously. As my students considered these very different visions of the past, I’d be asking them to think about the lens through which an author chose to look at the 20th century, and how that lens affects the story that she is trying to tell us. 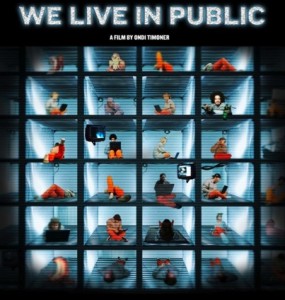 Throughout the course, our projects were designed to get the students to ask where ideas came from, and how they connect to where we are now. Our second project, for a unit on texts that were focused on the 1960s, required them to use visual rhetoric to consider how a 1960s-based narrative “travelled” to the present day. What does a text tell us about the 60s, and how does that theme continue to manifest itself? How has it been transformed?

One student took ZZ Packer’s short story, “Doris Is Coming”—a story that takes place in 1961 and focuses on the Civil Rights movement—as her bridge to the new millennium. The story asks us to consider the idea that not all African American churches supported the Movement unequivocally, and my student was inspired to research religious organizations’ degree of support for Civil Rights in the past. She then compared those churches’ stances then to their positions on LGBT rights and same-sex marriage now. This sort of connection was valuable and intriguing in and of itself, but her method of expressing her argument visually was especially noteworthy. Calling her project “Politics and Religion,” she created a deck of cards, with a suit devoted to one of eleven religious denominations, and designed a project that illustrated the progression from Civil Rights engagement to support of LGBT rights (or lack thereof). Her method required readers to enact that progression themselves as they put down one timeline-card after another.

In this way, she not only found a narrative in the story that she could trace to the present day; she also used the tools of visual rhetoric to make a reader (quite literally) play along with her as she made those connections.

For our final project, groups of students collaborated to make the pieces of history that our authors had focused on fit together in some kind of unified way. They decided on a “consensus theme” that the previous 100 years seemed, to them, to be about, and they chose six of the readings and viewings from those we’d looked at to consider through this particular lens. They then constructed an electronic timeline that featured each of the texts as the doorway into that theme, and incorporated research about what was actually happening before, during, and after those literary landmarks’ settings. Perhaps most importantly, they concluded their timelines with some speculation about where things were heading.

Many timeline makers are available online, free for use with the creation of an account. One of the best of the free sites (and one that the majority of my students ended up using) was Tiki Toki, a program that allows users to easily tag specific dates with embedded video, images, text, and hyperlinks. Many of my students were intrigued with the idea of resistance to social norms, and a number of groups focused on “Individuality” and “Struggles for Freedom” as unifying concepts.

One group whose project stood out for its depth of research and its original use of the electronic tools available on the timeline focused on the idea of “Discrimination.” They crafted a timeline in which they incorporated Allen Ginsberg’s “Howl,” the activism of the Civil Rights movement, and Mad Men’s depiction of nascent feminism, in ways that required viewers to see the past within the present, and to recognize that narratives of discrimination from previous decades are continuing to play out.

You can view the full timeline here.

These sorts of projects helped my students to not just research history, but to recognize their implication in historical narratives that don’t necessarily begin and end neatly. Today’s students are the ones who will decide what lessons we should learn from the recent past, and this course, hopefully, began a process for them of wanting to seek out the origins and future developments of the ideas that inspire them.

Noah Mass received his Ph.D. from the University of Texas at Austin. His relocations from New York to San Francisco to Austin to Atlanta over the past several years have inspired his work on space, place, and identity in American life. He specializes in 20th and 21st century American literature, southern literature, African American literature, and ethnic and third-world studies. He is currently working on a book project in which he explores the impact of the Great Migration on southern literature. His published work has appeared in Studies in American Fiction and the edited collection Science Fiction and the Two Cultures. He currently teaches English 1101: The Rhetoric of Southern Identity, in which his students will consider the persistence and value of southern regionalism in an an era characterized by global flows of capital, people, and communication.
View all posts by Noah Mass →
Tagged  20th Century, cultural history, timelines.
Bookmark the permalink.