Home » Teaching » Assignments, Lessons, and Exercises » Thinking outside the box by playing inside the box: Games as texts and teaching tools

Thinking outside the box by playing inside the box: Games as texts and teaching tools

On April 26, 1478, as part of a plot against the Medici, conspirators attempted to assassinate Lorenzo de’ Medici and his brother Giuliano in the Duomo at high mass. Giuliano died but Lorenzo escaped. The reverberations of this daring plot, known as the Pazzi conspiracy after the family who spearheaded the assassination attempt, profoundly shaped Florentine politics. It was a seminal event, well-known in certain circles, but often overshadowed by the study of the great men, great works, and stunning achievements in art and architecture the Italian Renaissance is particularly known for. In short, most people would bomb the trivia question: “What happened on on April 26, 1478 for five-hundred, Alex?” 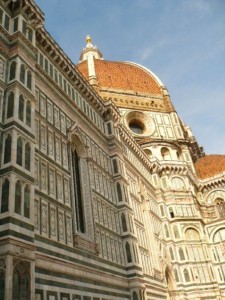 The cathedral where the event took place. Photo courtesy of the author.

My students in this semester’s ENGL 1102 Course, however, have not only heard of the Pazzi conspiracy they have lived it. They have interacted with Lorenzo de’ Medici, Niccolò Machiavelli, Caterina Sforza, and other seminal political figures. They cultivated their own villas and talked politics with courtesans. They collected famous artworks and worked with Leonardo da Vinci on commissions. They watched Savanarola’s bonfire of the vanities and helped to bring down his theocratic government and restore the Medicean regime. While doing this, they studied women’s property rights and Machiavelli’s political thought. They read humanist poetry and and studied Renaissance philosophy. How did they accomplish all of this, you ask? By playing a videogame. 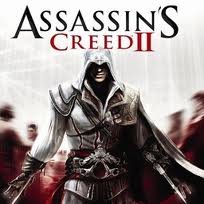 This semester, taking a risk that I wasn’t at all sure was going to pay off, I assigned a videogame as a text. The game in question is Ubisoft’s blockbuster bestseller Assassin’s Creed II. Nevermind the fiction, graphic novel, and concept album that comprised the rest of the required reading for the course; this particular assignment really felt like going out on a limb for me both pedagogically and professionally. First, my expertise in electronic games is limited. I’ve never been much of a gamer besides the odd foray into Super Mario Kart or the occasional experiment with an RPG. I’m an amateur at best. Second, while it seems self-evident that students, particularly Georgia Tech students, would be excited by the possibility of playing a video game for their English class, when it got right down to it, reading and analyzing a videogame would prove a great deal of work both for me and them. Finally, from a practical standpoint assessing their comprehension and analysis of gameplay could prove especially tricky. At the end of the day, however, the game itself, and its inherent pedagogical potential convinced me that it was worth a try. Plus, I happen to know a bit about the Italian Renaissance. 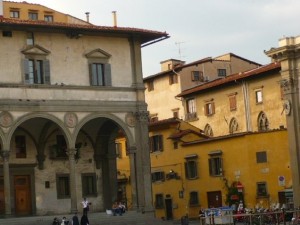 The author took this picture but did not actually get to climb these Florentine roofs until she played the game.

It really turned out to be worth it. The students responded even better than I anticipated and, yes, hoped. They played the game with gusto. In conjunction, they read some really challenging texts. They analyzed. They debated. They collaborated. They wrote insightful blog posts about the experience. Finally, they resoundingly advocated for the inclusion of the videogame as both a text and a learning exercise in the classroom. They met and, indeed, surpassed my benchmarks for the unit’s learning objectives. I will be assigning this text again in the fall and the takeaway for me is this: videogames have potential. Over the summer break and during the fall semester, I will continue to explore this potential and will be writing a series of TECHStyle posts chronicling my experience, the experience of my students, and how this experience has altered my views on the composition classroom. Spoiler alert: It has altered my views. Profoundly. The risk paid off.