THATCamp Prime, at George Mason University’s Roy Rosenzweig Center for History and New Media, taught me that a word does not make a new publishing model. The UnPress session was, surprisingly perhaps only to my naive mind, very complicated – with many tweets expressing frustration at just what an UnPress is or what it could contribute to scholarly publishing.

Despite the complexity, there was a feeling that the word “UnPress” (if nothing else) was compelling. For me, the power of the word was evidenced by its use in Jennifer Howard’s piece in The Chronicle on “Building a Better University Press” and its plug in the live-podcast recording of digital campus at THATCamp on Friday. There were also several suggestions for what an UnPress could accomplish in the session.  For example, Dan Cohen and Amanda French discussed the possibility of an UnPress promoting content from scholars with low clout. Further, backchannel contributor Andy Famiglietti observed that a model of distributed review loosely based upon Wikipedia would be an interesting difference from traditional peer review. Here is a link to a GoogleDoc of the notes from the UnPress session.

However, I do agree with the sentiment that focusing on written forms of communication (the journal, the monograph) limits the potential of an UnPress. In the spirit of doing something with the UnPress that, as one camper exclaimed “push[es] for [what] hasn’t been possible before,” I’d like to outline some potential uses for the UnPress that go beyond traditional written academic communication. 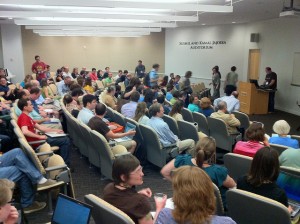 THATCampers congregate at the beginning of the first day. Photo by George Williams.

If the University Press is about publishing individual research and enhancing the prestige of scholars and institutions, I envision the UnPress as a space that encourages ongoing, multimodal, and innovative collaboration connecting scholars to audiences who have traditionally been separated from academic discourse.  The internet might be a place where an UnPress can exist, but in my view, there needs to be a more focused effort in making archivable and public collaboration happen.

You might be saying, “Yes, yes, Roger…that’s great, but let’s have an example project.” That’s what I, and hopefully some of you, could work on in the near future.