Home » Miscellaneous Posts » Your Soundbite Pleased me Greatly: Commonplacing in the Classroom

Your Soundbite Pleased me Greatly: Commonplacing in the Classroom 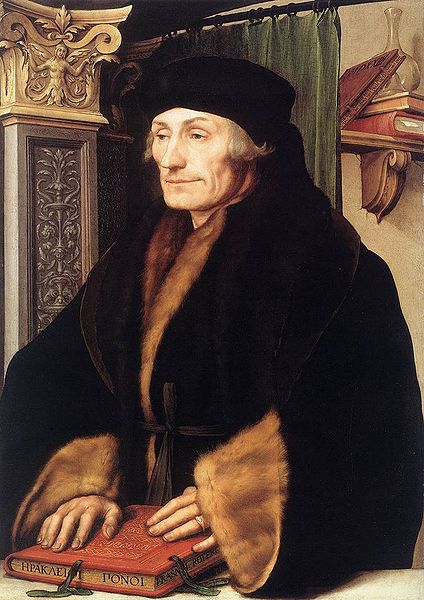 For my third soundbite-related post, I’d like to talk some pedagogy. This semester I’m teaching a course on copia, which in some ways would seem to be the opposite of sound-biting.

Copia is about abundance, variety, superfluity, excess, accumulation—words not normally associated with soundbite culture. The latter conjures very different terms:  truncation, abbreviation, superficiality, redundancy, speed, spin. (A pretty good example of the barrenness of soundbite culture is this clip from Conan O’Brian, which I showed my students during the first week of class.)

Soundbites are the trivial nuggets of information we routinely substitute for whole stories, a habit blamed on or at least connected with several other societal trends: hyper attention, sensationalism in news media, information overload. But copia has a long history, one in which a version of soundbites has, arguably, a crucial place. When Erasmus wrote the very popular On Copia of Words and Ideas, he was careful to present copia as no spontaneous outpouring of material but a learned skill, one mastered through such impressive but wearying exercises as rewriting the sentence “Your letter pleased me greatly” 195 different ways. 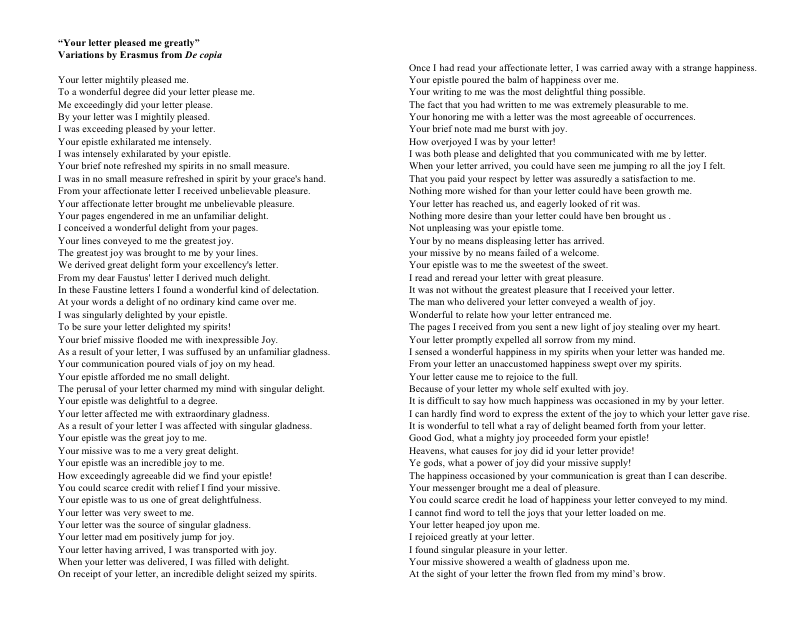 Less tedious methods of practicing copia existed, such as keeping a commonplace book; students would gather material from their reading and record it in a book organized according to topics and subtopics. Erasmus explains the benefits of commonplacing:

[A]fter you have collected as many headings as will be sufficient and arranged them in the order you wish, and have placed the appropriate divisions under each, and to the divisions have added the commonplaces or sententiae, then whatever you come across anywhere in any author, especially if it is very noteworthy, you will immediately mark down in its proper place…. This method will also have the effect of imprinting what you read more deeply on your mind, as well as accustoming you to utilizing the riches of your reading.

The point, then, of gathering and framing all of this material was to make it easily retrievable for later use in conversation or debate. Commonplaces are the soundbites of the early modern period, in a way, and they are hardly superficial or insubstantial; they simply require a long view, a commitment to a process that validates the dissection or abbreviation of texts, as a way of deepening contact with that text, not avoiding it, and as a way of making a text more mobile, more transferrable to other contexts and discourses.

This semester my students are keeping their own commonplace books. Most will publish their material via blogs, but a handful have chosen to keep physical scrapbooks. I’ve told them to aim for variety, and have imposed no real limits on the content they gather. A friend’s text message or status update will serve just as well as a speech from Twelfth Night. I wondered when making the assignment if this last choice would backfire on me. It meant ignoring Erasmus’ warnings about copia, warnings that appear in the very first chapter when he complains about all the unlucky “mortals” who, aiming for abundance of expression, instead “fall into a kind of futile and amorphous loquacity, as with a multitude of inane thoughts and words thrown together without discrimination….” In the next century Francis Bacon, as much as he approved the idea of commonplacing, would remark that “of the methods and frameworks of common-places which I have hitherto seen, there is none of any worth; all of them carrying in their titles merely the face of a school and not of a world; and using vulgar and pedantical divisions, not such as pierce to the pith and heart of things.” 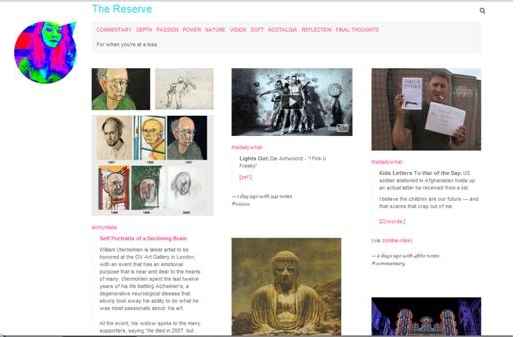 Bacon’s and Erasmus’ reservations make sense, as do a lot of the objections to soundbites and soundbite culture. But what draws me to the idea of commonplacing is the potential that anything we come across might be worth storing away for later use or pleasure; everything becomes notable, (re)markable, in a quite literal way. I imagine the content of these commonplace projects will come to me messy and enigmatic; not all will pierce to the heart of things. At worst an assignment like this gives students permission to memorialize, sentimentalize, glamorize material that may deserve nothing more than to be passed over. At best, though, it might encourage them to connect the worth of what they observe to their imaginative capacity to make it worthy.

Like Guido here does, in the movie Life is Beautiful.

Christine Hoffmann (PhD University of Arkansas, MFA Art Institute of Chicago) studies the shifting standards for credibility and utility that develop inside post-Gutenberg and post-digital rhetorical environments. Her scholarly work has been published in College Literature, the CEA Critic, PLL, the CEA Forum and, somewhat randomly, Slayage: the Online Journal of Buffy Studies. A few short stories can be found in Make magazine, Eclectica and Loose Change. She also blogs regularly on TECHStyle, the forum for digital pedagogy and research by the Georgia Tech Brittain Fellows. Christine looks forward to connecting the teaching of multimodal composition to her research into rhetorics of struggle, cultures of collecting, and the advantages of copious expression.
View all posts by Christine Hoffmann →
Tagged  commonplace book, commonplacing, copia, erasmus, soundbites.
Bookmark the permalink.