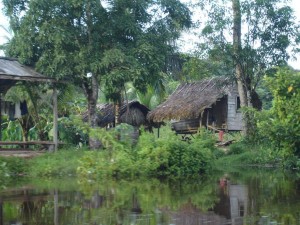 Last month, while attending a Caribbean Island Cultures conference held at the University of Guyana in Georgetown, Guyana, I was jolted out of my usual polite conference attentiveness when a series of papers suddenly shifted away from the usual focus on such traditional island cultures as Storytelling, Carnival or post-colonial inequalities, to the effects of tweeting and texting on Creole speakers of English. This was surprising since the usual Caribbean conference papers are more focused on the literature and history of language than technology. What was even more surprising was the discovery that not only do our down island ‘tweeters’ and ‘texters’ speak two separate varieties of English –one Creole, one “standard,” the cyber generation is now creating and texting in digital versions of creole.

For the uninitiated, this is a huge linguistic phenomenon. The field of Creolistics (the study of creole languages as a sub-field of linguistics) has not anticipated the influence of the digital world on creole languages. Volumes have been written, and continue to be written, on the African, Asian, Indigenous, and European influences of creole languages spoken throughout the world, but to date I have encountered nothing substantial on the influence of texting on Creole speakers. Yes, as English teachers we are all familiar with the amorphous spelling errors that reflect our students’ preference <2 spk 121> however, <@TEOTD > this becomes confusing when a creole texter writes <bal> instead of <lol>. While most of us know that <lol> means laugh-out-loud, how many of you understand that <bal> means busalaugh, the creole version in Guyana of “burst out laughing”! Of course, in Jamaica or Trinidad the creole variant may be different, resulting in a different digital version –the possibilities for linguistic combinations and complications are mind boggling. Precisely the point of the Guyanese English teachers, “English through the internet is taking on a life of its own.”

By now you may be mildly amused, but somewhat confused as to what this has to do with Georgia Tech and the teaching of English. The answer is that our Guyanese colleagues have discovered that creole texting is making it difficult for students to code switch from internet text to Standard English because texting has created a de facto third language which the presenters have labeled “Creole Cyber English.” Linguistically, Cyber English reflects certain characteristics of the local English creole, but since it neither conforms to the grammatical structures of Creole (yes, creole languages do have a fully formed grammatical structure), or English as the accepted standard for reading, writing, and speaking in academic and business situations, teachers are now faced with students who code-mix in the classroom.  Segueing from that, as chair of the Georgia Tech World Englishes committee, I ask you the logical question: How many varieties of texting are here at Georgia Tech? Surely, with almost thirty percent international enrollment we have a variety of “cyber Creoles” in our classes. Do we recognize them? Are we prepared to cope with their challenges?  Only you have the answer.