The final project for my ENGL1102 course “London City Comedy” is a collaborative digital edition of Tarlton’s Jests, a 17th-century collection of anecdotes about the Elizabethan clown Richard Tarlton. The assignment consists of five parts:

When I first assigned the jests, I looked into the blanching faces of students trying to make sense of admittedly challenging early modern black-letter printing – made more difficult by the bad microfiche PDF’s I was forced to offer them. To give you an idea of what they were working with, here is one of the jests. Tell me how quickly you can decipher it: 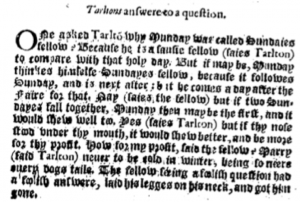 The jest "Tarlton's Answer to a Question" from Tarlton's Jests

As part of the assignment, students have met with me several times in the DevLab, where we can work in teams and use the large monitors to try and reveal elusive letters and words. I encouraged students to try and maintain original spelling in the draft transcription, explaining that it would actually be easier for them to make sense of the jests in the revised version if they could at first resist the temptation to place an “f” in place of the actual long-s “ƒ” and other confusions. In the beginning there was much confusion, and the first two weeks of blog posts expressed frustration sometimes bordering on despair. But as I read this Friday’s blog posts and comments a curious and exciting pattern has emerged. 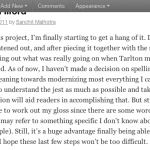 Not only are students getting the hang of the transcription, many are expressing enthusiasm for the revelations they have made using the OED (thanks to Sherri Brown for making sure we could get access to it!). They’re also starting to compare notes about their parts of the editions, and discovering those patterns I told them they’d find, and to make plans for how they can demonstrate the context of their jests through images and maps (many of the jests make reference to places in London and throughout England). AND many of them are starting to discover the humor in the jests. Granted, some of the jokes come across as creaky and odd, but the more we dig, the more little eureka moments these students are having.

When we first began this assignment, I assured them that there are aspects of comedy that are universal and timeless. I think they’re starting to believe me.

Diane Jakacki received her PhD from the University of Waterloo, where she specialized in early modern printed drama, and participated in federally-funded digital humanities research projects. She has published two articles on applying social semiotic methods to early modern theatre history, an edition of Wit and Science, and co-authored an essay on developing digital image annotation tools. She is a software consultant to imageMAT and the Records of Early English Drama. At Georgia Tech she applies digital humanities methods to pedagogical solutions. Jakacki is currently developing researching the Elizabethan clown Richard Tarlton and his touring relationship with the Queen’s Men troupe.
View all posts by Diane Jakacki →
Tagged  blog, digital edition, digital pedagogy, early modern, jests, multimodality, popular culture, Tarlton, wiki.
Bookmark the permalink.