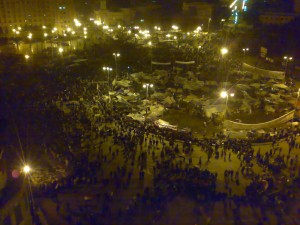 Last fall in my English 1101 course on celebrity culture, I had my students analyze the real-time media discourse surrounding the Jon Stewart/Stephen Colbert “Rally to Restore Sanity and/or Fear”. Once again I find myself drawn to teaching current events as they unfold. This term I am teaching ENGL 2400: Introduction to Media Studies. After two weeks of teaching a theory-rich survey-oriented approach to the subject, I had yet to feel that I was connecting with the students. There are probably lots of reasons for this – the class meets during the “food coma” period (1:05 – 1:55pm) in a computer lab … eyes cross and droop, heads dip down behind their monitors to check heaven-knows-what social networking application. Maybe it’s me. Maybe it’s their disinterest in things I love, like the shift from manuscript to print culture. But that all seems to be changing.

On Tuesday, in a meeting that had nothing to do with Media Studies, a group of us started talking about the situation in Egypt and what a great opportunity it would be to teach the impact of technology on volatile political and social situations such as the one that began in Tunisia and is now unfolding at hyper-speed in Egypt. We walked away from that meeting not knowing how we, as professors, could be flexible enough with our course structures and assignments to undertake such a flash-mob approach. But then, as sleep evaded me on Tuesday night (the best and worst time for idea generation) it dawned on me that I already had the forum for such an approach. My Media Studies course could benefit on several levels by establishing a case-study focusing on the situation in the Middle East. And in the process I could try to snap my students out of their stupor.

Wednesday I pitched the idea to my students: they would become media analysts examining how various media work (and don’t work) to help us process events that are happening so quickly. Aside from some to-be-expected questions about course marks and due-dates, they embraced the idea with enthusiasm. By Friday I had overhauled the entire course syllabus and presented it to them for buy-in. This is the description of the case-study as I gave it to them:

Premise: the revolution in Egypt and surrounding Middle Eastern countries – offers an unprecedented opportunity to examine the roles that various media are playing in actions within the area as well as international observations about what is happening. Traditional mass media such as magazines, newspapers and even television do not appear to be capable of capturing the discourse that is happening in hyper-real time.
Opportunity: Use the forum provided by the Introduction to Media Studies course to teach students about media theory and analysis using a fluid and responsive syllabus and a variety of readings, activities, and assignments.
Challenge: without any idea of how this situation will play out in Egypt and beyond, the only way to approach this idea is by creating a “flash” case-study that evolves along with events and media coverage of these events. By using the case study approach, I will ask students to consider questions of credibility, authority, bias, and effective communication methods. They will examine ideas pertaining to mediation and remediation. We will discuss what happens when a government attempts to cut off media outlets of its citizens, and how social networking tools (such as Speak To Tweet) are creating a narrative of the unrest in Egypt. We will debate questions of ethics in terms of media coverage of such an action.
Classwork: students will read a combination of news reports, chapters from their textbook, Media and Culture, news reports, theoretical articles and social network feeds. They will participate in an ongoing blog and twitter stream through which they will learn to articulate and evaluate what they are observing. They will take part in a series of formal in-class debates keyed to questions of journalistic ethics and technological benefits. They will engage in Q&A sessions with a series of Brittain Fellows who are interested and expert in a variety of the aspects of the topic. The section will conclude with a multimodal midterm project (produced in Prezi) geared to synthesize the work they have done in class.

Friday’s class went from snooze to … well, whatever is the opposite of snooze. Working off the whiteboard, we addressed questions of media credibility, and identified a variety of media sources that are participant in the current situation. Hands flew up with examples and questions. Students began talking to one another and not just answering me. We will continue this discussion tomorrow by redefining McLuhan’s terms “hot” and “cool” media – in this case, using the phrases to examine not sensory interaction but responsiveness and credibility. I’ve assigned them to read Malcolm Gladwell’s two New Yorker articles, as well as blog posts about social media in Egypt. If you’re interested in following along, they can be found at the links below:

Considering how fast information is being conveyed, the question of managing one’s access to and analysis of media becomes very important. I’ve suggested that students set up Google or Yahoo! Alerts to create a digest(ible) means of gathering general news. We’re also going to look at using Instapaper, delicious, and digg.

This case-study is evolving as the situation in the Middle East does. You can follow me on Twitter (@DrJgatech) and participate in our stream at #ENGL2400. I’ll post more as the class develops. Suggestions for topics, articles to read, and participation is encouraged! If you are interested in sitting in on our class or even guest-lecturing, please let me know – all are welcome! Onward into the abyss!!

Diane Jakacki received her PhD from the University of Waterloo, where she specialized in early modern printed drama, and participated in federally-funded digital humanities research projects. She has published two articles on applying social semiotic methods to early modern theatre history, an edition of Wit and Science, and co-authored an essay on developing digital image annotation tools. She is a software consultant to imageMAT and the Records of Early English Drama. At Georgia Tech she applies digital humanities methods to pedagogical solutions. Jakacki is currently developing researching the Elizabethan clown Richard Tarlton and his touring relationship with the Queen’s Men troupe.
View all posts by Diane Jakacki →
Tagged  current events, Egypt, media studies, pedagogy.
Bookmark the permalink.