Home » Teaching » Assignments, Lessons, and Exercises » Taking on the Trivial in English 1102

Taking on the Trivial in English 1102

When this school year began, everyone was talking about the GT convocation video that went viral. “You can do that!” was the theme of the speech, where “that” meant things like changing the world, crushing the shoulders of giants, and building the Iron Man Suit. Big ideas! Big risks! Epic theme music! It was an inspiring speech, and how refreshing to see a student who understands that presentations are also performances (I have a hard time getting this across in the classroom).

I noted the freshmen in the audience reacting with enthusiasm to Selby’s grandiloquence, his emphasis on innovation, empowerment and individual accomplishment, but when it came time to choose a theme for my Spring 1102 class, I still decided to go in the opposite direction. My course description emphasized triviality, insignificance and uselessness:

Every one of us has some interest or talent that we would call trivial. But how do we determine, both individually and culturally, what is trivial and what is not, and why do we make room for triviality in our lives and our brains? Does trivia humble us or embolden us? Are trivial things always useless things? As scholars, artists, scientists, inventors and innovators—as human beings—can’t we make anything useful or significant if we try hard enough? Or is it possible that a thing’s significance—its vitality, value, relationality or relatability—has nothing to do with us, with what we do or what we think?

The last question is, I think, the most important and, I hope, the most provocative. My research over the past couple of years has brought me closer to theories of posthumanism, postcomposition and object-oriented ontology. The latter theory is the one we engaged with more directly this semester. I gave my students excerpts from Ian Bogost’s Alien Phenomenology, and by the second week we were considering answers to one of the questions the book proposes, What is it like to be a thing? Instead of perching on the shoulders of giants, then, I wanted my students crouching, hunkering, stooping, peering; the posture required for this class was a humbling one, in other words, because our goal was not (only) examination of the trifling things, moments, characters and assemblages that populate our environments, but immersion with/in them.

My motivations here were rhetorical as well as philosophical. I quote Byron Hawk (who here and there quotes Mark Taylor and Thomas Kent), who might be called a proponent of object-oriented rhetoric, writing that intersects with immersion, ecology and “evolutionary processes:”

“the writer as screen operates in a polarity with the situation and in an ecology of personal experience, texts that are read, and words that are written…. The writer becomes a circuit relay in this larger ecology … Like ants, writers are a ‘colony of writers’ caught up in the larger evolutionary flows of other networks. In short, ‘[t]he moment of writing is a moment of complexity’ (198). And in Taylor’s view, we write to produce and embody these moments in order to contribute to the evolution of thought-schemata and thus the whole (cultural) ecology. Our writing should disturb, create more noise, push equilibrium into new relations and assemblages.” (A Counter-history of Composition, 193-94)

Hawk proposes composition methodologies of complexity that “are seen as parts of larger constellations rather than as abstracted general procedures” (208). Students “start with experience, generalize a pattern or schema from that experience, turn that pattern on future experience, and then adapt the pattern to devise a new schema” (192).

What does this have to do with OOO? Well, it seemed to me that a good way to prompt students to think of themselves not as (all)knowing, autonomous writers/users but as circuits in an ecological relay was to ask them to work with, and alongside, trivial things. For our first assignment, the vanitas-selfie, we examined 17th-century vanitas art alongside 21st-century selfies. The assignment: 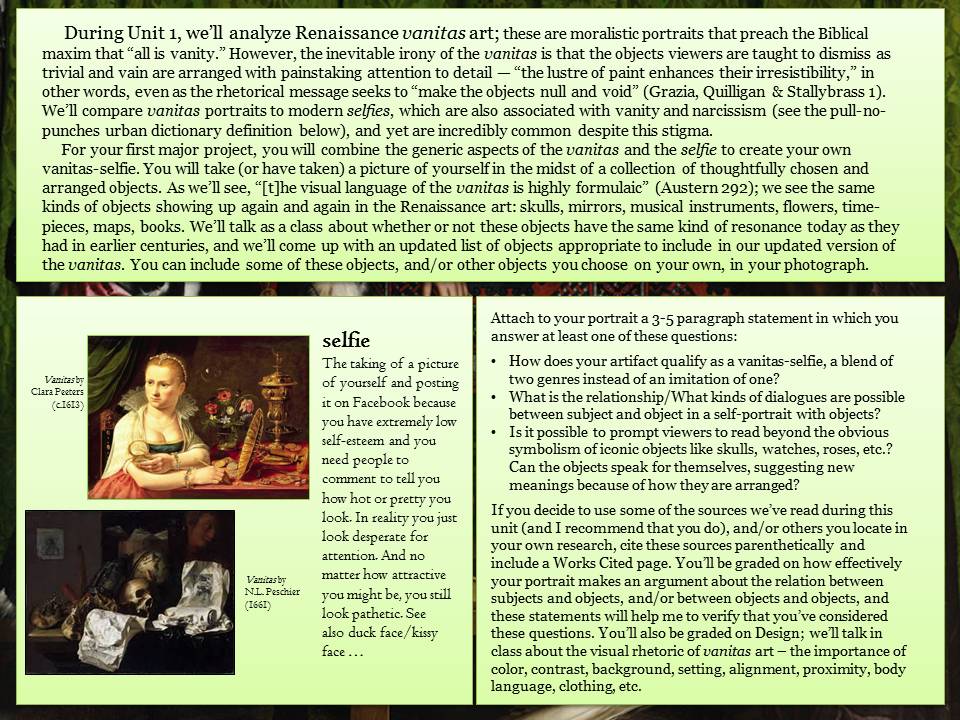 Because we started the unit by analyzing vanitas portraits, students did have “abstracted general procedures” to work with, but because the assignment required them to combine vanitas and selfies, I believe that our true starting point was the experience of comparing and contrasting these two genres, generalizing a pattern based on our findings. For this project to work, we had to think carefully about objects, appreciating first the irony of vanitas art—mentioned in the assignment description above—but also recognizing that bodies, when they do appear in these works of art, operate as parts of the assemblage, as things among things. And while I wouldn’t go so far as to say that everyone who takes a selfie is trying to answer the question, What is it like to be a thing?, I can’t help but see certain #extremeselfies or @selfieOlympics pics (see below) as contributions to conversations about materiality and ecology. The latter, as Timothy Morton asserts, “is profoundly about coexistence” (Ecological Thought 4). The former, Jane Bennett notes, “is a rubric that tends to horizontalize the relations between humans, biota, and abiota. It draws human attention sideways, away from an ontologically ranked Great Chain of Being and toward a great appreciation of the complex entanglements of humans and nonhumans” (Vibrant Matter 112). The often literal entanglements of bodies and objects in these photos do, I think, draw our attention sideways, pushing off-balance the equilibrium we assume exists between subjects and objects. The best student work I saw aimed for the same disruptive, often debasing entanglements that materialize in (extreme) selfies, respecting at the same time the formulaic visual language of the older art form.  Some student examples can be found here, below and at the bottom of the post.

For later projects, we continued to think about human-nonhuman relations. The course culminated in a one-day-only showing of each class’s cabinet of curiosities/trivialities, for which they nominated objects all semester long and then curated in earnest during the last weeks of the semester. Once again putting experience before general procedures, I asked students to nominate curiosities first and decide on an exhibit theme second. For many students this was the most challenging, frustrating part of the assignment, finding (or inventing) the connecting threads between 23 disparate objects (a mummified cat, a Hawaiian curse, an optical illusion, a perpetual motion machine, and so on). Two sections chose broad, open-ended themes which suggested more than asserted connections between items. The other section committed to a conspiracy narrative loosely based on a South Park episode: every object on display was either a weapon or a defense in the centuries-long secret war between humans and crab people. I asked students to reflect on the success of the exhibit after it was over, and while many agreed that the conspiracy exhibit was the most coherent, a significant number of students expressed resistance to the idea of organizing a curiosity cabinet around a narrative. So many reflections used some version of the verb “force,” as in “I didn’t like how they forced meanings onto objects; that’s not what a curiosity cabinet is about.” I may be reading more into these responses than is warranted, but I’m tempted to see in them a tentative allegiance to object-oriented ontology or object-oriented rhetoric; these student critics implied, and in a couple cases articulated quite clearly, that when you “force” objects into a narrative you risk ceasing to speculate on their relations; I don’t know how much I agree with that argument, but the point is that as visitors to the exhibit, they didn’t want to be robbed of the chance to speculate, and more importantly they didn’t want to rob the objects of a complexity that can’t, or at least shouldn’t, be captured in a single story. 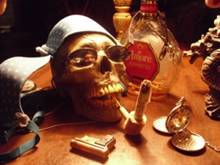 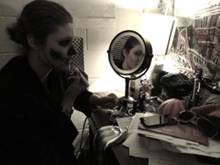 Essentially, I wanted to offer my students an alternative to the “you can do that” refrain they heard at convocation, asking them to think instead about what things can do—are already doing—with us and without us. They can do that is less an empowering refrain than a humbling one, but as Bennett suggests, there’s much to be gained from speculating on the vitality of nonhuman actors:

“encounters with lively matter can chasten [our] fantasies of human mastery, highlight the common materiality of all that is, expose a wider distribution of agency, and reshape the self and its interests” (Vibrant Matter 122).

Another way I attempted to engage with this philosophy in the classroom was through poetry, so let me conclude this post with one of my favorites from the semester.

As you read, a white bear leisurely
pees, dyeing the snow
saffron,

and as you read, many gods
lie among lianas: eyes of obsidian
are watching the generations of leaves,

When students brought up this poem in class discussion, they pointed out the way that agency is acknowledged in the title and promptly redistributed across landscapes. This is a poem that invites you in and immediately immerses you inside a trickling, tracing, turning schemata.  Levertov’s nod to the reader turns out to be a challenge to her to understand her rhetorical position as immersive and possibly interdependent (because it’s possible, I think, to read the “as” in “as you read” as causative and not only concomitant).

I am humbled by this poem, humbled too by the work my students performed this semester. I had great fun designing an entire course around triviality, and I’m glad that I came to Georgia Tech, where I could do that. 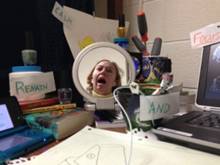 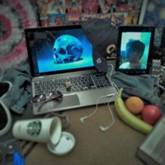 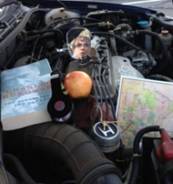 Thanks to my students Clay Eckman, Alex Lewis, Janet Garner, Jonathan Gosyne, Aneri Muni and Doug Learnard for giving me permission to feature their vanitas-selfies.

Christine Hoffmann (PhD University of Arkansas, MFA Art Institute of Chicago) studies the shifting standards for credibility and utility that develop inside post-Gutenberg and post-digital rhetorical environments. Her scholarly work has been published in College Literature, the CEA Critic, PLL, the CEA Forum and, somewhat randomly, Slayage: the Online Journal of Buffy Studies. A few short stories can be found in Make magazine, Eclectica and Loose Change. She also blogs regularly on TECHStyle, the forum for digital pedagogy and research by the Georgia Tech Brittain Fellows. Christine looks forward to connecting the teaching of multimodal composition to her research into rhetorics of struggle, cultures of collecting, and the advantages of copious expression.
View all posts by Christine Hoffmann →
Tagged  curiosity, object-oriented ontology, object-oriented rhetoric, OOO, OOR, postcomposition, posthumanism, triviality, vanitas.
Bookmark the permalink.