The V in WOVEN—Student Posters (Part 2)

When I invite students to use social media for more formal assignments, they say they find writing “definitely enjoyable” and “more entertaining” in that they bring more “academic focus” to the their digital lives. Consumed primarily for instrumental reasons (glued to their mobile devices, like the rest of us, students text, post, like, tweet, google, etc. in order to hang out, keep in touch, follow and be followed, etc.), social media sites have the potential to offer alternate methods of investigating works of literature and art. Rather than just witnessing social media transforming our students into digital zombies, we should show them how social media platforms can be used as creative means of literary and scientific investigation.

In a previous post, I showed how students in my English 1101 class design posters documenting the impact their field of study has on the environment. Here, I want to continue my investigation of visual assignments by focusing on students’ visual artifacts created for the follow-up English 1102 class. According to the guidelines of the Georgia Tech’s Writing and Communication Program (link), English 1102 classes build on English 1101’s WOVEN (Written, Oral, Visual, Electronic, and Nonverbal) communication foundation and continue to help students learn how to communicate more effectively, but with a greater emphasis on research, argument, and applied theory. After three semesters of teaching 1101 courses as a Marion L. Brittain Postdoctoral Fellow in Digital Pedagogy, I got the chance to teach three sections of 1102 in the Spring 2014 semester. This transition was beneficial both to my confidence as an instructor of multimodal communication and to my understanding of the progress the students make when they transition from 1101 to 1102. This was a great opportunity to see how our students integrate the WOVEN approach to communication and to experience first-hand how they are influenced by the English classes they take with the other Brittain fellows. 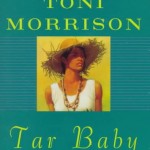 In my 1102 class, titled “Homecoming: America’s Sense of Place in the Novels of Toni Morrison and Marilynne Robinson,” I invited my students to explore the ways in which fiction writing and cultural analysis shape our understanding of place, identity, and culture. For this, we read, in the following order, Robinson’s Home and Gilead, as well as Morrison’s Home and Tar Baby, together with critical essays that explain and contextualize the topic at hand. Although the reading load might have been heavy at times, the students read the texts carefully, took notes, and came to class with a strong sense of why & how the reading material might contribute to our class discussion. I also encouraged them to read most of the recommended articles and essays posted on the Resources section of T-Square (Georgia Tech’s Sakai online platform) and to supplement the readings by doing research via the library and online sources. As for the major course projects, they had to design a visual project, write a research paper, and create a multimodal artifact, all detailing their own interpretation of place by analyzing characters and themes from the novels studied in class. For each individual project, they also had to write a proposal, peer review and revise a first draft into a final draft, and write a reflection immediately following the submission of the assignment.

As I will show in the remainder of this post, for the visual project, also the first 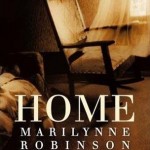 project of the semester, they had to re-mix one of their ‘tweets,’ previously posted as reading notes on T-Square, into a visual project by designing a poster or curating a Facebook page about a character, theme, etc. relevant to the topic of the class. After only three weeks of classes, the students were asked to analyze visually any aspect they found of interest in Marilynn Robinson’s Home, a book that recounted the story of Jack Boughton, a man with a troubled past, returning home after 20 years. Even though they hadn’t yet finished reading the first novel by that time, they had to discover as they kept reading not necessarily the plot twists but rather the intricacies of character formation, and the novel they were reading pertained easily to this type of investigation.

One student decided to use a Facebook template to create a PowerPoint presentation both to capture and show the evolution of Jack as a character. He used the tweets/reading notes as starting points for his slides and, following the peer review session, added summaries to each slide in order to bring clarity and purpose to his visual: 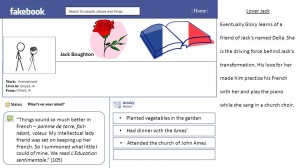 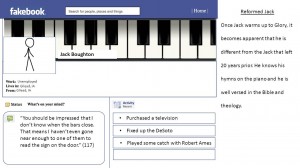 Created as a PowerPoint slideshow, the visual was based on a Facebook template that still allowed the student to analyze the character’s transformation throughout the novel and to represent the interplay between the literary and the digital.

Another student imagined the character’s life in a more inclusive both fictional and digital life: if the novel took us down memory lane twenty years into the past, the student’s project showed how the character would progress into the future and how his lifestyle would change based on his actions in the book. Jack not only lives on to become a respected husband, father, and grandfather, but he also has a Facebook page to prove it:

What the student found out was that the setup of the social media site also allowed him to add great detail to his page: where the character was born, the places he lived in the novels, his likes and interests, and other personal details added in the About tab. As the student explains in his reflection, the header picture of the woods is meant to show how mysterious Jack was in the novel and the project overall allowed him to create a future for this character based on his past in the novel.

Another student made good use of the Facebook features and created an event in which Jack Boughton invited his family and friends to a reunion to make amends for his past deeds and celebrate his homecoming: 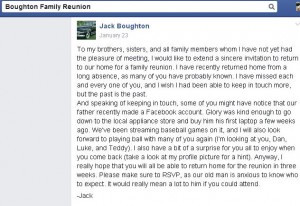 Like the previous project, this one also capitalized not only on Facebook’s user-friendly interface but also on Robinson’s mastery in leaving her novel open-ended. In his project, the student both created a multimodal artifact and interacted with a work of fiction in a realistic way by contributing his own interpretation to the life of the characters.

In a more formal take, another student created a page rather than a profile that functioned as a book club in order to facilitate discussion about both the protagonist and the novel at large. Creating a Facebook page for a book club turned out to be a great idea for a visual project in that it bridged the gap between “analog” readers and “digital” users: sharing thoughts on an online platform functions as a supplement to a face-to-face regular meeting of a book club.

Last but not least, a student had the brilliant idea to combine the two requirements of the assignment. Instead of choosing between designing a poster and curating a Facebook page, as the prompt asked them to do, the student decided to have it both ways and so she created a Facebook poster: 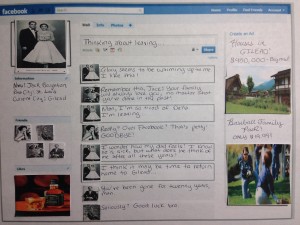 The poster allowed the student to deconstruct the purpose of a normal Facebook page and use each of the sections to give the audience insight into Jack’s character. Moreover, the poster was more appealing to her audience because she showed them how they can control social media sites rather than simply be controlled by them.

These few examples show clearly that our students are savvy enough to understand how to manipulate social media to their own advantage. While many of them might admit that using Facebook is more entertaining than reading a book, they may find reading equally entertaining when prompted to design visual artifacts meant to represent how young readers experience the plot of a novel as seen from a character’s perspective. Reading and therefore writing and composing are no longer passive when they have to decide what events might function as good status updates or how commenting, sharing, following, or friending might help to move the plot forward.

Mapping out the life journey of a literary character in the form of a poster or Facebook page also means mapping out the parameters of one’s identity grounded both in the visibility of a social media profile and in the invisible choices one has to make when deciding what to make public and what to keep private. To a certain extent this interplay between inner and outer life is what literature is all about and I consider myself fortunate to be able to share this with my students. Occasionally, they are also willing to share back: students who still curate their projects on Facebook interact with me via updates or likes, meaning that the relationship between the student and the teacher gets a life of its own long after the end of the class.

Iuliu Ratiu started his teaching career at Kent State University where he earned a master’s degree in English and Writing and taught writing and composition classes. While pursuing his doctorate in American Studies at SUNY Albany, Iuliu served as a mentor in the Writing Center and continued teaching a variety of lower and upper division composition, writing, and literature classes. His research agenda covers the period leading to the Civil War and allows him to engage with critical social, cultural, and political issues such as slavery and domesticity, the role of print culture in the development of the nation, and incipient manifestations of environmental awareness. This semester, Iuliu hopes to teach his students how to pack and unpack the nuts and bolts of communication by reading closely Georgia Tech’s e-book "WOVENText" and how to apply those findings to a close analysis of Colin Beavan’s family multimodal project "No Impact Man," which is, in turn, a living experiment, a blog, a book, a documentary film, and a publicity stunt.
View all posts by Iuliu Ratiu →
Bookmark the permalink.