Why I Love THATCamp 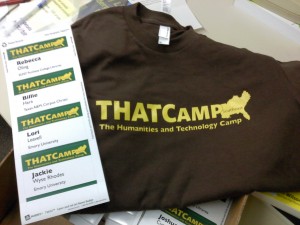 As a master’s student in my introductory theory course, I became particularly enamored by Roland Barthes’s essay “Why I Love Benveniste.” At the end of the essay, Barthes says that

Working with him, with his texts […],we always recognize the generosity of a man who seems to listen to the reader and to lend him his intelligence, even in the most special subjects, the most improbable ones. We read other linguists (and indeed we must), but we love Benveniste.

What a magical feeling! While I tried desperately to be like those scholars I most admired, Barthes saw in Benveniste a figure who would lend his readers his intelligence. Derrida had an unearthly ability to evade me. Deleuze was so cool that I wanted to ride the wave of his hyper-prose. I knew I could only be, at best, a pale imitation of these thinkers. But the magic of Barthes’s sentiment is that Benveniste didn’t want you to be like him; he wanted to share with you.

I can’t think of a better way to characterize my experience at THATCamp. So much of my experience in the humanities has been centered around finding, and defending, an increasingly small track of academic land. Conferences have often filled me with a sense of the resentment that I feel almost programmed to acknowledge as the proper approach to academic life. Most recently, I remember having a discussion about the role of love in philosophy. One participant remarked that we should be critical of love, that it often keeps us starry-eyed with a thinker or a topic while ignoring important problems. I didn’t necessarily disagree, but I was truly disgusted. You mean I can’t even really love what I do anymore?

But THATCamp? I felt the love even before the unconference started. Within session proposals and comments as they appeared on the THATCamp SE website in the week before our gathering, I recognized a group of people who were more interested in making and working than they were with intellectual property. I volunteered to help teach a bootcamp session on WordPress, Drupal, and Omeka. WordPress was pretty familiar to me, Drupal would be handled by another camper, and I ambitiously convinced myself that I would learn Omeka before the presentation. Of course, as procrastination increased and THATCamp loomed, I did not learn Omeka in the way I expected to.

Anxiety ensued. I started the Bootcamp with my trusty co-presenters Tim Bryson and Andy Famiglietti, who were themselves heroically helpful in successfully introducing WordPress and Drupal. However, I knew that neither of them were able to discuss Omeka. I had typed up a few notes, but I was certain that I wouldn’t be able to represent Omeka adequately. When it came time to discuss Omeka, Miriam Posner immediately dispelled my anxiety. “Do you need a volunteer to talk about Omeka?” She took over the presentation and helped me contextualize a system I knew next to nothing about. Anxiety was replaced with a magical feeling of possibility.

Now I’m not suggesting that, had I been in the same position at a regular conference, people would have let me rot onstage. But the fact that I assumed that I could not ask for help from the audience reveals to me the degree to which my intellectual upbringing has been poisoned with the isolating and guilt-ridden ideologies of academic, all-too-academic, conferences. The idea that one person, alone, is the only repository of knowledge that matters (or doesn’t matter) is anathema to THATCamp. It is a philosophy expressed by Tom Scheinfeldt in his collegial rule for THATCamp (shared with us by Brian Croxall at the beginning of the weekend):

At most conferences, the game we play is one in which I, the speaker, try desperately to prove how smart I am, and you, the audience member, tries desperately in the question and answer period to show how stupid I am by comparison. Not here. At THATCamp we’re here to be supportive of one another as we all struggle with the challenges and opportunities of incorporating technology in our work, departments, disciplines, and humanist missions. So no nitpicking, no tweckling, no petty BS.

The rest of the weekend only deepened my love for the collaborative camraderie of THATCamp. From GoogleDoc guides on sessions to proposed blog posts, addictive white-boards to friendly tweets, campers found every means to extend, transform, archive, build, and hack the conversations that occurred. We talked, sure, but we also found every opportunity to create useful stuff for members who attended the sessions and even those who could not. For example, you can find links to notes from sessions about Digital Humanities in Higher Education, Messy DH, Games, Sexy Good Web Design, Alternative Academic Careers (#alt-ac), the Digital Tool Show-and-Tell (“building with spare parts”), and Envisioning Librarian/Scholar Collaborations.

I know that I left every session with new tools, new assignments, new coding strategies, but most of all I left with a new sense of what it meant to collaborate with other people. Working with the participants at THATCamp, with their ideas about pedagogy and their programming languages, I enjoyed the generosity of campers who listened to me and lent me their intelligence. I will go to other conferences (indeed I must go to them), but I will always love THATCamp.