Home » Teaching » Assignments, Lessons, and Exercises » Learning to Teach in the Anthropocene

Learning to Teach in the Anthropocene

By Kent Linthicum August 26, 2019 May 11, 2020 Assignments, Lessons, and Exercises, Reflections on Teaching, Teaching

How do I teach while the world burns? How can I teach in the Anthropocene? I thought one night while washing dishes. In the face of the Anthropocene and its harbinger, climate change, teaching seemed futile. At the time, I was also listening to a video essay by Oliver Thorn of Philosophy Tube. Towards the end of his essay, Thorn referenced the work of Stacy Clifford Simplican on different modes of political engagement. This is what caught my attention:

The idea of a political engagement predicated on vulnerability intrigued me because climate change makes us all—rich and poor, Global North and South, teachers and students—vulnerable but in different ways. I later tracked down Simplican’s Capacity Contract (2015) and was drawn to her interpretation of John Locke’s Second Treatise and An Essay Concerning Human Understanding. Simplican’s claim is more complex than there is space for here, but in essence she argues:

Locke’s work on disability reveals another and more emancipatory side of the capacity contract[1] — a side that sees vulnerability as an essential marker of human life that prompts men to form and maintain the social compact amid personal incapacity. (Simplican 27)

This is a different way of thinking about the social contract. Rather than seeing the contract as a way of defusing “the war of all against all”—a force that stops us from trampling each other’s natural rights—Simplican understands the contract as a compact of solidarity between people of different abilities. Rather than seeing contracts as mere protections of property, this vision of the contract takes exposure and difference as grounds for generating flourishing communities. This is key for Simplican’s work as it allows her to offer another way to include people with intellectual disabilities within democratic citizenship beyond questions of capacity.

But for me, Simplican offers a way of thinking not only about the inclusion of people with intellectual disabilities within democratic citizenship, but also how we might rethink community in the face of environmental vulnerability. In light of Simplican’s reading of Locke, vulnerability has the potential to transform elements of the Anthropocene from a Manichean do-or-die cataclysm into something more thinkable and actionable, especially in the context of pedagogy.

The Anthropocene is a fraught concept that takes the environmental damage done by a few and applies it to the anthropos, or all of humanity (Chakrabarty, Malm and Hornborg, Harraway). My first encounter with the Anthropocene was in Crutzen’s foundational article “Geology of Mankind” (2002), alongside Chakrabarty’s, Haraway’s, and Malm and Hornborg’s criticisms of Crutzen’s work. Later, I read additional critiques by Whyte, Mirzoeff, Yusoff, and Davis and Todd. Yet, when I first taught students about the Anthropocene in my English 1102 course, “Energy and Entropy in Anthropocene Cultures,” I unintentionally elided the unequal responsibilities and effects of the Anthropocene, which those scholars highlighted.

The course embraced a broad definition of the Anthropocene thanks to my background as a scholar of eighteenth- and nineteenth-century literature; students were tasked with thinking about the entwined systems of energy and culture in the Anthropocene through Victorian literature, modern science fiction, and global politics. Over the semester, as we discussed energy—its uses and ends—those critiques of the Anthropocene became increasingly clear to me. I framed climate change as rescindable. I suggested to my students we, those who have benefited the most from burning carbon, might be able to keep what we have. That rethinking energy, imagining a carbon-deprived future, or exploring multinational treaties might be steps on the path towards society intent on reversing the parts per million of CO2 (and other greenhouse gases) in the atmosphere. However, later, as students developed final projects, my elisions became clear to me and I grasped why I had to change my approach to teaching this climate crisis.

Rhetorically, I had thought that dwelling on the bleakness of the Anthropocene was unlikely to inspire my students. Georgia Tech is a solutions-oriented institution, and so I had balked at the idea of presenting my students with a problem that has few (if any) solutions. For example, to understand the difficulty of multinational political action on climate change, I had students attempt a mock renegotiation of the 2009 Copenhagen Accord as attendee nations. Of my three sections, only one was successful, drafting a treaty that could have been accepted by the major attendees of that conference. It was a treaty that would also doom island nations like the Maldives and the Marshall Islands and endanger others like Uganda and Bangladesh. Yet we still treated the treaty as a success, which it certainly was insofar as it would have been accepted by the major carbon emitters, the United States, China, and India. But in this exercise, we lightly touched on the damages some nations would suffer to allow others to carry on. A better treaty, perhaps in 2022, we hoped would solve the problem. These solutions, though, did not take the edge off the crisis.

Admittedly, some students were energized by the course, one stating early on: “I have grown pretty passionate about global warming and am considering a career in environmental biology.” Yet, despite my solutions-oriented approach, students also reported being overwhelmed by climate change, uncertain of what they could do and in some cases afraid. The words “doom,” “disheartened,” and “upset” repeated in some student reflections. This did not surprise me. It is easy to get stuck within the challenges of climate change and the doubts they engender. Yet, throughout the semester, I came to question my own seesaw between optimism and fatalism, as climate change is both an immense challenge and yet it is not the end of either humanity or the world. I now believe that as instructors we should complicate the twofold vision of these crises—salvation or doom—for our students and ourselves. For me, this meant examining the role of vulnerability in building pedagogical space, thinking towards community, and preparing for climate change. 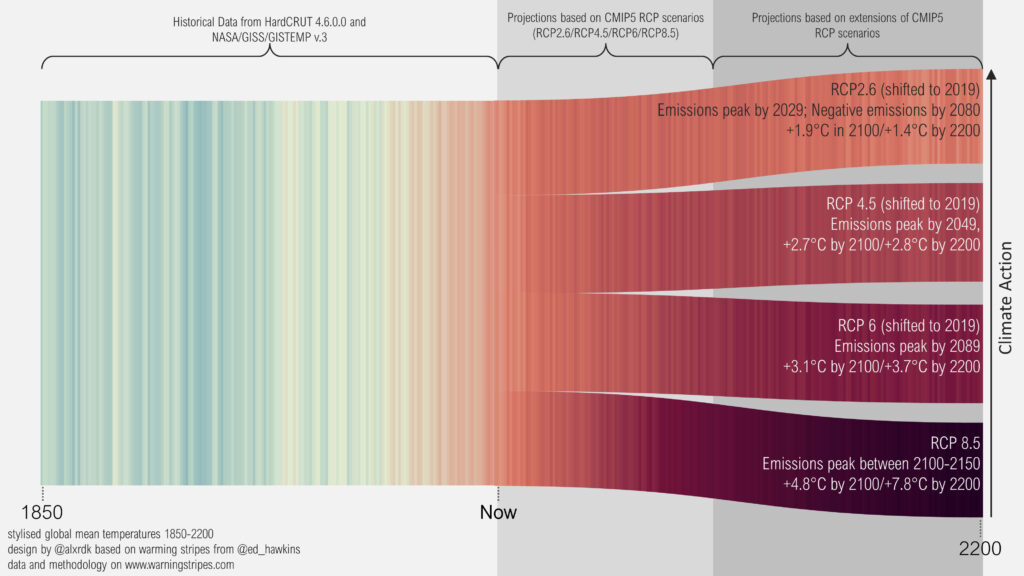 To be clear, retooling my pedagogy on the grounds of vulnerability will be a long process of experimentation and mistakes. But I have a few first steps in mind. First, as per my training as a literary historian of the eighteenth and nineteenth centuries, I can teach my students how slavery and industrialization highlight the ways that the Anthropocene is built upon settler and extractive colonialisms. I’m planning next semester to teach a class on the entwined histories of slavery and fossil fuels, paralleling American resistance to the end of slavery with the resistance to the end of carbon-based energy systems. This course will pair texts including Narrative of the Life of Frederick Douglass, an American Slave (1845) by Frederick Douglass with Parable of the Sower (1993) by Octavia Butler. The following semester, I’m hoping to teach a class focused on the ways that Indigenous people have had their sovereignty stripped from them for the purpose of energy extraction. These topics will expose students to the ways the Anthropocene has made and makes communities vulnerable, not to fetishize those vulnerabilities but to show students the asymmetrical vulnerabilities of the Anthropocene, and then help them contrast those vulnerabilities to their own as a space to build solidarity. 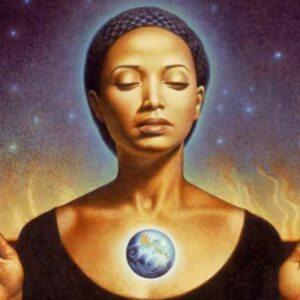 Lauren Oya Olamina, the protagonist of Parable of the Sower, by John Jude Palencar

Beyond course content, a survey of asymmetric vulnerabilities requires reshaping the class space to reinforce the values of interdependence. In the classroom, I will strive to create a community of vulnerability. Students enter the composition classroom, especially the multimodal classes at Georgia Tech, with a wide range not only of skills, but also weaknesses. Through guided group projects and peer review, I want to help students recognize their own particular areas for growth when it comes to communication practices, course content, and questions of the climate crisis. Indeed, the question of how to work collaboratively in light of vulnerabilities is also a question of communication. This will require that I too approach my students with an acknowledgement of my own vulnerabilities, and ask them to help me where appropriate. For one, I can readily admit that my students’ knowledge of the technologies they use in multimodal composition—let alone to someday manage carbon emissions and rising temperatures—exceeds my own, so I will ask for assistance from those who do, like Georgia Tech’s librarians or the students themselves. And of course, this will mean listening to and learning from communities with vulnerabilities different from my own, building alongside them pedagogies and knowledge systems for the Anthropocene.

Teaching my students to seek solidarity in vulnerability does not mean flattening the distinctions between vulnerabilities (as the Anthropocene, as an analytic, risks doing) but rather recognizing that distinct responses are necessary and valuable. In fact, some of my students might not see climate change yet; I did not see climate change when I was an undergraduate, and my path to seeing it was not through science alone. It was only when I took a class on ecological criticism and colonial nineteenth-century American literature that I began to grasp the edges of the climate crisis, a process which spurred my interest in the environmental humanities. Yet many people do see climate change, and many people are already living in post-apocalyptic times (“White Allies…”). My goal will not be to romanticize the vulnerabilities of marginalized people, but rather to make legible how all communities are varyingly threatened by climate change and how we can support each other through these differences.

But, as Kyle Powys Whyte states, platitudes about commonality are never enough; we must also “experience the solidarity of allied actions that refuse fantastical narratives of commonality and hope,” which “require[s] that allies take responsibility and confront the assumptions behind their actions and aspirations” (“White Allies…”). To that end, my Fall 2019 English 1101 course will be part of Georgia Tech’s Serve-Learn-Sustain initiative, supporting a nearby community as it develops a greenway east of campus. My students will create visual arguments, using the multimodal rhetorics we develop in the course, to examine and demonstrate how the greenway will serve local communities and contribute to resilience. To do that will require understanding the specific vulnerabilities of that community, which means visiting the community and listening to community members. My intention is for students to then consider—in more nuanced, reflective, and ethical manners—how their own communities are vulnerable in ways they’ve not yet seen or imagined. I can’t teach my students to save the world that was, but I can teach them how to contribute to the communities which shape world that will be. 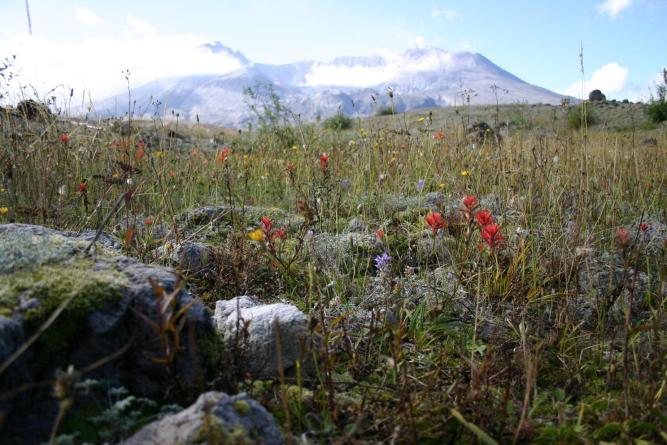 Pumice Plain Wildflowers (2004) by P. Frenzen. The ground here was essentially sterilized by the 1980 Mt. St. Helens’ eruption. The forest that was here is dead, but other life persists in different ways.

Davis, Heather, and Zoe Todd. “On the Importance of a Date, or Decolonizing the Anthropocene.” ACME: An International E-Journal for Critical Geographies, vol. 16,4, 2017.

Yusoff, Kathryn. A Billion Black Anthropocenes or None, University of Minnesota Press, 2019.

Kent Linthicum is a Marion L. Brittain Postdoctoral Fellow at the Georgia Institute of Technology. His research and teaching focus on the intersections of literature, science, and the environment, especially the aesthetics of energy systems in the Anthropocene. His essays have appeared in The Atlantic, European Romantic Review, Nineteenth-Century Contexts, Slate, and elsewhere.
View all posts by Kent Linthicum →
Tagged  Anthropocene, Climate Change, Environmental Humanities, teaching.
Bookmark the permalink.