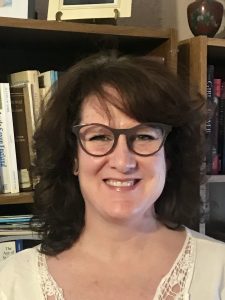 The Professional Development Committee reached out to former Brittain Fellows and other experts to find out the answers to these and other related questions. The interview below — with Kellie Meyer, a teacher at TMI Episcopal School of Texas, and a former Brittain Fellow  — is the sixth in this series and our second interviewee to work as a high school teacher. (Other interviews feature John Harkey, Rebecca Weaver, Brandy Simula, Andrea Krafft, and Emily Kane.) The interview has been lightly edited for clarity.

What years were you a Brittain Fellow/what institution did you come from?

What is your job now and how long have you been doing it?

I am a high school English instructor at TMI Episcopal School of Texas. I teach sophomores through seniors, college-prep, honors, and AP classes. I’ve been in this job since 2015.

What was your path to your current position? What sort of contacts or experiences were helpful to securing that job?

For a variety of reasons, I decided I no longer wanted to pursue a tenure-track university position and even attempted to get out of academia entirely. That didn’t go well, and as cliched as it might sound, I realized that I was only truly happy being a teacher.

A conversation with another former Brittain Fellow, Tom Lolis, made me realize that teaching high school was a viable option. I admit to never being interested in doing so in the past, and in fact, I hadn’t realized I was qualified to do so, since I don’t have an education degree. However, as Tom informed me, private schools are quite happy to hire someone with a master’s degree or a PhD.

I signed up with the two main agencies that place teachers with schools who are hiring, Southern Teachers Agency and Carney Sandoe & Associates. As the name implies, Southern Teachers services the southern states, while Carney Sandoe covers most of the rest of the US and International schools. I had no luck through Carney Sandoe, but Southern Teachers started matching me almost immediately with schools who were hiring for English and History positions. I had several phone interviews with various schools, and then, in an extremely amusing coincidence, I ended up interviewing and being hired at the high school where Tom Lolis was currently teaching in San Antonio.

I was actually hired to take over from a different teacher who was retiring that year, but, unfortunately, Tom was also leaving to 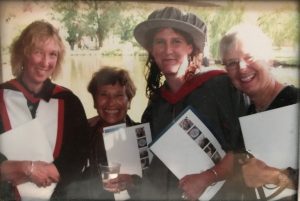 The interdisciplinary nature of Kellie Meyer’s PhD helps her teach a range of subjects.

move back to Georgia, so we never got to work together. I’ve never been sure how much Tom’s presence at the school helped me; while he was not on the hiring committee, I can only assume that he spoke well of me and the skills I would be bringing to the table! I believe the cross-disciplinary nature of my PhD (Medieval Studies) probably also helped—while I primarily teach English, I have taught a few medieval history/literature classes and was supposed to teach AP Art History this year, though it was cancelled due to Covid complications. I am also actively involved in the long-range plan to combine our English and History departments into a comprehensive Humanities department.

The most valuable skills that I have incorporated into my everyday curriculum are those associated with WOVEN multimodal communication. I teach best practices in visual design along with oral presentation skills, and students regularly incorporate various electronic platforms into their work. The students have produced extremely professional websites, podcasts, and white papers, as well as posters for gallery walks and “chapel talks” given to the entire community from the 6th graders up through members of the Board of Governors. A Capstone Class I premiered last year was meant to publish an entire book of collected essays and artwork inspired by interviews conducted with prominent members of the San Antonio community who practiced Restorative Social Justice, but Covid…. I am hoping to try again this upcoming year.

What is the primary difference you’ve noted in teaching high school vs. college?

There are pros and cons. The cons are the ones you’d probably expect, relating almost entirely to behavior. At my school, the behavioral issues rarely escalate beyond a bad attitude, but I do find the lack of personal responsibility disconcerting. It took me several years to get my head around the fact that I was supposed to be tracking down and regularly hounding the students who weren’t doing their work and that I was also expected to get in touch with their parents to inform them of academic issues. I am still not the best at this, particularly with the seniors, who I tend to think need to learn some responsibility before they get to college!

The other major con is the workload. I tend to have about 75 students a year, and the sheer amount of grading sometimes overwhelms me. There is also a heck of a lot more class planning (especially this year having to teach online and hybrid classes) and lots of committee and department meetings, along with sponsoring student groups (or coaching sports, which I don’t do). I generally work around 60 hours a week. On the other hand, when I am done, I am done—I don’t have to worry about doing research and publishing, though I actually miss the research sometimes. I’m constantly thinking of new things I’d like to write about, if I only had the time! While it can be exhausting, I also find the very regular schedule good for me; I tend towards sloth when I have too much free time.

The main pros are the student relationships I build up. I cannot overstate how wonderful it is to really get to know the kids. There is a world of difference between teaching kids 2-3 times a week for one semester and teaching them every day for a whole year, or, in some cases, numerous years in a row. Experiencing both their intellectual and emotional growth is fantastic!  It’s also wonderful when they come back to visit and tell me how much what I taught them has helped them in college, or when they email me to tell me about some new author they have read or about some new topic they have encountered that they think I will be interested in. This honestly makes up for any of the cons!

Rachel Dean-Ruzicka is a Lecturer of Writing and Communication, where she specializes in teaching the department's corequisite composition courses. She received her PhD in American Culture Studies from Bowling Green State University in 2011, with an emphasis in film and media studies. Her book, Tolerance Discourse and Young Adult Holocaust Literature: Engaging Difference and Identity, was released in a paperback edition from Routledge in 2019. She has previously published on paranormal teenagers who defeat serial killers, all-ages feminist comic books, female engineers in YA fiction, and the films of director Wes Anderson. She has a forthcoming article on the podcast My Favorite Murder, to round out her pop culture crime publication credentials. Her current research investigates models of maturation, YA Weird fiction, and contemporary feminist theory. Despite all the murder and mayhem in this bio, she's really quite a cheerful person.
View all posts by Rachel Dean-Ruzicka →
Tagged  alumni, job market, teaching.
Bookmark the permalink.