Home » Feature » Translation and Transformation: International Modernism in the Classroom

Translation and Transformation: International Modernism in the Classroom 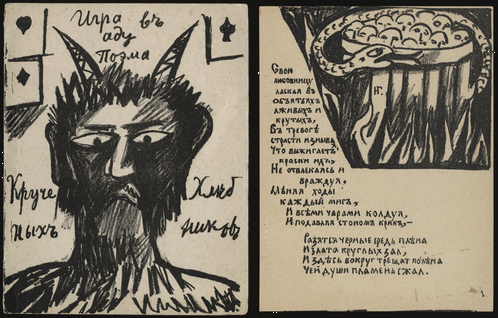 One of the advantages of teaching at Georgia Tech is the linguistic diversity within any given classroom. Not only is there a wealth of World Englishes, but many of the students are multilingual, with fluencies in a wide variety of spoken/written languages as well as a hyper-fluency in programming languages. As a modernist scholar invested in the increasing emphasis within Anglophone modernist studies on texts and contexts beyond a core of transatlantic works, I’ve found that Georgia Tech’s diversity offers both me and my students a chance to practically engage with questions that reflect the complexities of global exchange rather than erecting boundaries. These are big issues, of course, and in order to bind enormous concepts to the parameters of a semester-long class, I focus our discussion and work around a fairly consistent topic in the so-called “new” transnational modernist studies: translation and the conversation surrounding the problems/promises that accompany it, such as the possibilities for transformation and deformation of the A-text. It’s an important issue as the tentacles of modernism stretched across the globe.  Here I’ve included just two instances of its instrumental arms: a collaboration between artist Natal’ya Goncharova and poets Velimir Khlebnikov and Aleksei Kruchenykh, the influential Russian Futurist illustrated bookA Game in Hell: A Poem (1912) and Oswald de Andrade’s outline for Brazilian modernism, “Cannibal Manifesto” (1928). 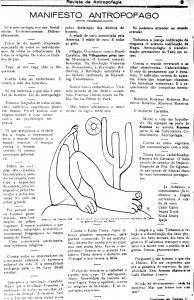 To spend any amount of time with the broader context of Anglophone modernism is to come up against important works that—barring immersive study of scores of languages—one must approach through translation. Because of the expansive nature of modernism, it is a field that lends itself to horizontal reading and analysis. I’ve found that teaching modernism as modernisms—less like a series of major texts and images and more like the wide-ranging field that it is, constantly being penetrated, recreated, and enriched—is an especially rewarding approach in the classroom. Not only does this tactic allow the class to discuss the international context of transatlantic modernism, but it also pushes disciplines to intersect. We look at Djuna Barnes’s work as an illustrator in concert with her prose and we get to consider Mina Loy’s assemblages alongside her poetry. We examine how art punctures national boundaries—understanding Marcel Duchamp’s part in the creation of NY Dada or Ezra Pound’s formative role in British Vorticism begins to convert my students’ analytic skillset from one that favors cautious, reductive answers into dynamic inquiry. Despite my attempts to encourage curiosity about the shifting sands that lie beneath even our most established cultural moments, the fact remains: time is limited and at the beginning of the semester I generate a stable, curated collection that highlights the texts and histories I value.

To offset this I compel my students to participate in creating the trajectory of our semester’s conversation about modernism. One way I’ve done this is through a unit that addresses the place of translation in modernism. First, we discuss the implications of untranslated fragments in big-fish canonical poems like Pound’s “Rock-Drill Cantos” or T.S. Eliot’s “The Waste Land.” Then we move onto broader issues surrounding translation, such as the importance of translation to modernist writers. Finally, we discuss the anxieties surrounding translation and its relationship to the “original,” spending a section of the class reading a selection of theories on translation, from John Dryden’s belief in the careful balance between literal translation and paraphrase to Yves Bonnefoy’s concept of the translation as an extended metaphor of the original text to Walter Benjamin’s contention that translation stands as its own text by revealing, through deformations of the original, meaning that remains hidden in the source.

Then comes the assignment. The students become the translators. Here are the series of steps that guide them through the process:

The final paper will have three parts:

1. Identify the approach to translation that you chose (i.e. Bonnefoy, Derrida, Rossetti, etc.). Be specific about why you made the choice and how you practically engaged the theory in your own translation. (1-2 pages)
2. Provide a parallel text (or as close as possible) of the original and your translation.
3. Compose a translator’s essay that argues for your final choices. You should feel free to address the category of “failed translations” (and its merits) that we’ve discussed in class. You should consider the limits of both linguistic and cultural representation. Consider what is lost in translation and what is gained. (2-3 pages)

Even in a class dominated by Anglo-American modernist texts, this unit offers all of my students a moment to expand the terms of modernism with works that reflect their own aesthetic, cultural, and conceptual choices. My English language learners, in particular, become the experts in this section—after all, this unit simply formalizes the negotiations they make every day. Ultimately, each student ends up doing the hard work that the most patently difficult of modernist texts demand: students become co-authors and participate in the struggle of how meaning sometimes emerges and, at most other times, recedes.

Gabriel Lovatt (PhD, English, University of Georgia) is a Marion L. Brittain Fellow at Georgia Tech. Her book project, “The End at The Beginning,” considers how the aesthetic and conceptual innovations of Decadence anticipate the experimental procedures of twentieth-century modernism.  Her areas of research and teaching include transatlantic modernism, the international avant-garde, and Victorian literature and culture. Her work on the representation of China in the little magazines appears in Journal of Modern Literature and research on the connections between Decadent modernism and twentieth-century invention is forthcoming in Victorian Poetry. Contact her at gabriel.lovatt@lmc.gatech.edu