Using Multimedia and Film as a Motivational Medium for Students 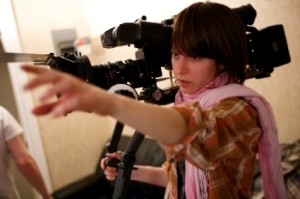 As a multimedia instructional librarian, I am continually amazed at how much more engaged and  excited students become when they have to challenge themselves and break away from using what they consider to be the traditional modes of communication in an academic environment.  For example, this can occur through having to create a website, a visually stunning poster, designing a three- dimensional model, or masterminding a feature film.

So often, the necessary emphasis placed on the message content may cause us to forget the importance of choosing the best method for delivering that content. The way information is transmitted has the potential to either obscure or enhance the message content.

In the last year, I have been approached by several people on campus, in various disciplines, to work film-making into the library’s workshop curriculum. There are some interesting articles on the premise of communicating science & other various academic topics through film and the overall benefit of the film making process to the student.  For those interested in the idea of using film as a tool for engaging students and more importantly motivating these students to engage others,  should check out  Randy Olson’s blog :  The Beneshi: essays from Scientist turned film maker.

Randy Olson is a marine biologist turned filmmaker who pushes the idea of encouraging those in the sciences to communicate their subject material using creative and unique techniques.  He also runs educational three day seminars on the how- to’s of making engaging science based films. More information on Randy & his book “Don’t Be Such a Scientist: Talking Substance in an Age of Style” can be found at the website of the same name:  Don’t be such a scientist .

The concept involves turning students into storytellers. He takes students with little or no prior film making experience and has them work on a short piece on their research or a science based topic. Projects of this nature allow students to take potentially dry topics and turn them into dynamic subject material, exciting both to the students and their audiences.

Although film making can be a solo endeavor, experience seems to show that more of an impact is made when it is a group effort. In general, film making requires group synergy and encourages collaboration, and ultimately increases creativity and critical thinking.

My observations from the campus projects with which I’ve been involved are that communicating through the film making process is an effective way of turning a learner into a teacher; and how often do we as instructors learn something new when we have to think about absorbing new material from the learner’s perspective as a beginner. Film provides us with a vehicle for turning the learner, who primarily sits and (hopefully) absorbs what is presented, into a presenter. What better way to engage students than to get them to motivate their peers to learn about subjects to which they may not have been previously exposed or to which they had not had an interest. The film making process for the student becomes a reflection of their personal vision; it forces the student to think about how other people process and absorb their chosen subject material or topic. Turning the tables on how students process information can get many students out of what I term “auto pilot mode” and encourage proactive involvement and active learning, ultimately highlighting important topics that may have otherwise flown under the radar.

All of us who have taught a course recognize how much we have learned from our students. Current technology has now provided us with film and other multimedia related tools to allow our students to participate in this same kind of reverse educational experience. My colleagues and I in the Library look forward to developing new workshops and future collaborations tailored to these kinds of exciting student projects!

Alison Valk is the Multimedia Instruction Librarian for the Georgia Tech Library. She has worked in a variety of capacities at Georgia Tech since 1998. Valk received her Master’s in Library & Information Science from Florida State University and a BBA from Georgia State University in Computer Information Systems. She also has a background in fine arts from the University of Georgia where her area of focus was Drawing & Painting. She coordinates all the course- integrated multimedia software workshops offered through the Georgia Tech library and has been researching the benefits of embedded librarians in college-level courses. She was recently published by the Association of College and Research Libraries spotlighting her efforts in this area.
View all posts by Alison Valk →
Tagged  digital pedagogy, library, technology.
Bookmark the permalink.