In an earlier post, I explained why I think interactive fiction (IF) computer games can drive valuable experiments in the multimodal composition classroom.  You can check out Part One for an overview of what IF is and what I think it can do for students.  In the present post, I’ll lay out a few more specific suggestions and resources for teachers thinking of exploring this rich genre.

Using Interactive Fiction in Your Classroom, the Easy Way: Students Play Games as Their “Reading”

A brief scene introducing IF:  On the second day of my English 1102 class last semester, I gave each student no information except a link (to Andrew Plotkin’s The Dreamhold, designed for first-time IF players), and asked them to start exploring (separately, each on his or her own computer) their first IF game.   The results differed in several ways from what might have happened if I’d handed out, say, a short story.  Here are the differences I found pedagogically noteworthy:

–First, the students had to form (and continually adjust) working hypotheses for how they might inhabit the text.  How were they meant to perform the role of the “you” in the text’s opening lines?  “You wrench your eyes open.  Rough grey stone.  Grey stone ceiling.  Your head hurts, and — You’re lying on the floor.”  To what extent could they discover (or choose) the significance and behavior of this “you”? 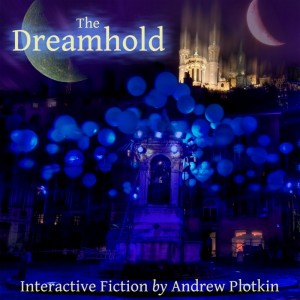 –They likewise formed and adjusted hypotheses for how they might meaningfully extend and develop the text, how they might co-author a sort of shared story as they felt out the parameters of the textual world.  What should they type, and what strategies could they develop to unfold this new kind of narrative?  Would the game recognize “open the small brass trunk“?  What about “examine my face in the mirror“?

–When they began to compare notes, they quickly realized that each member of the class was having a different experience, reading (and writing) a different text, and intuitively saw how this proliferation of texts and interpretations could be usefully shared.  When one student realized he could “wear the white papier-mache mask” with magical results, his knowledge quickly spread and informed his classmates’ (quite varied) play sessions, introducing an avenue of interaction they hadn’t yet considered.

–Finally, after our 50 minutes together, the students were left hungry for more, because the majority of the text was still undiscovered and unwritten.  They knew there was a great deal more to the story (how to carry the berries around?  how to use the telescope?), so they had a reason to keep working, to keep attending to and creating the text.  And of course, even if they “won” the game by reaching one of the multiple endings, there would still be no guarantee that they’d seen and done everything.

These differences add an additional dimension to the range of possible writing assignments.  You can ask the students to write about (or through) the games just as they would with a more conventional literary form, but you can also assign IF-specific investigations, asking the students to think about how the genre challenges traditional notions of authorship, audience, persona, narrative, and so on.  For instance, I use Adam Cadre’s short and brutal 9:05 for an assignment on the uncomfortable fungibility of the IF player (what does it matter who is typing?), leading students to write about how texts can actively construct and reconstruct their own audiences in other genres as well.  (I should probably clarify this point by telling you how 9:05 smashes players’ assumptions, but I don’t want to spoil the twist for you.)

Too, I use complex games (such as Jason Devlin’s Vespers) with interactive characters and multiple endings in order to focus writing assignments on the nature of authorship in the digital age, examining how IF rewards different kinds of players for different theories of authorship.  What happens, for instance, when a user approaches an IF work by trying to compete with, rather than cooperate with, the game’s author; how radically can the story be rewritten?  How much power does the user have over the text?

The unfamiliarity of the genre, combined with its focus on textual detail, can lend additional perspective to almost any kind of writing assignment.  In addition, IF is a great tool for close study of reader response.  Since the “script” or “transcript” command produces a written record of a play session, students can reflect on their interactive experience in considerable detail. 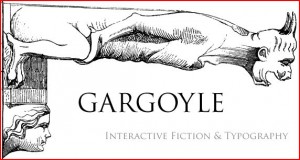 Plenty of IF games are playable in-browser, as Dreamhold is, but many aren’t.  There are thousands of games out there, written for many different platforms.  Fortunately, there’s a free, easy program called Gargoyle that works as a universal interpreter for almost any kind of IF game.  If you want your class to experiment with a bunch of different games, you’ll want to send everyone to the Gargoyle code page to download and install the appropriate version (see the left-hand column) of the interpreter.  Then, anyone can download and play nearly any game file out there.

“Out there” is a loose network of sites that host these games.  You could dive right into a big site like the Interactive Fiction Archive, but instead you should probably take steps to narrow down what you’re looking for.  You could look at lists of award-winners, like those at IFComp or at the XYZZY Awards, which have categories ranging from “Best Game” to more specific ones such as “Best Individual NPC [that is, non-player character].”  So if you’d like your students to pay particular attention to the interactive creation of character, or to how puzzles work in interactive texts, you’ll be able to line up a few games that get more deeply into your chosen issue.  Or you could browse by genre (and/or star rating) at a site like IFDB.  Teaching a class with a theme of sci-fi, or erotica, or mystery?  Chances are there’s a good game out there that will suit.

I have a couple of tricks for helping my classes explore the possibilities of the genre without requiring them to spend a hundred hours playing IF.  First, we do a great deal of group work (more on this in my forthcoming Part Three), so I can ask each student in a team of five to play a different game and report back to the group.  Last semester, the 5-pack I assigned to each group contained Aotearoa, Photopia, Spider and Web, Violet, and Zork I, to introduce them to everything from the genre’s roots in fantasy adventure and item-based puzzle-solving (Zork) to its experiments in emotion and memory (Photopia).  Academic readers may particularly enjoy Violet for its premise — the player character (PC) is trying to finish a dissertation in the face of various distractions — and for the attention it draws to the writing process.

Another method is to have a group of students play a single game together, turning a (possibly daunting or plodding) solitary experience into a more dynamic and thoughtful one, as the students think through different puzzles or problems, make maps, and come up with new ideas for what their appointed typist ought to try next.  This experience helps them to see how different players can react differently to the same IF game — knowledge that will be invaluable when they create games of their own. 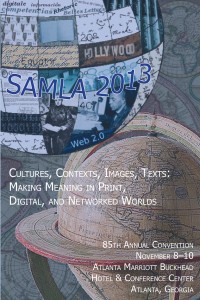 In Part Three of this short series, on “Using Interactive Fiction in Your Classroom, the Hard Way: Student-Written Games as Composition Projects,” I’ll tell the story of what happened when I asked my students to write their own rhetorically driven IF games in teams of five.  I’ll also post a couple of examples of playable student work!

I’ll be talking more about my classroom experiments with IF at the South Atlantic Modern Language Association conference here in Atlanta this November, as part of a panel titled “Infinite Variety: Possibilities and Choices in Writing.”  The final conference schedule will be posted later this month; you can find the time and location of my panel (and lots more information on SAMLA 2013) by clicking on the image to the right.  And I’d love to read and respond to any of your comments or questions, especially if you’ve taught or plan to teach IF.

About the author: A Brittain Fellow since 2012, Jonathan Kotchian (PhD and MA in English, University of Connecticut; BA in theater, Yale University) is revising his first book project, which shows how the figure of the superior author in early modern England co-evolved with satire. His second book project, which continues his investigation of “insider” literature accessible only to certain readers or viewers, explores the relationship between concepts of intelligence and literary taste. His interests range from Shakespeare and Milton to using theatrical training techniques in the multimodal composition classroom, where he asks his students to foreground their own motivations, self-presentations, and affective responses. Key interests: early modern literature, composition, authorship, satire, intelligence, drama, theater, interactive fiction games, and digital humanities. He can be reached by e-mail at jonathan.kotchian@lmc.gatech.edu or jkotchian@yahoo.com, and via Twitter @JonKotchian.

A Brittain Fellow since 2012, Jonathan Kotchian (PhD and MA in English, University of Connecticut; BA in theater, Yale University) is revising his first book project, which shows how the figure of the superior author in early modern England co-evolved with satire. His second book project, which continues his investigation of “insider” literature accessible only to certain readers or viewers, explores the relationship between concepts of intelligence and literary taste. His interests range from Shakespeare and Milton to using theatrical training techniques in the multimodal composition classroom, where he asks his students to foreground their own motivations, self-presentations, and affective responses. Key interests: early modern literature, composition, authorship, satire, intelligence, drama, theater, interactive fiction games, and digital humanities. He can be reached by e-mail at jonathan.kotchian@lmc.gatech.edu or jkotchian@yahoo.com, and via Twitter @JonKotchian.
View all posts by Jonathan Kotchian →
Tagged  composition, digital pedagogy, Games, interactive fiction, literature.
Bookmark the permalink.